In 2017, SMC a Volkswagen dealership in Copenhagen shot a photo of a new Volkswagen Polo parked in front of an installation by the Chinese dissident artist Ai Weiwei. The photograph was subsequently used to promote a new model of the Polo car on its website and inhouse magazine.

“In our globalised era, corporations often operate with impunity, answering only to their shareholders,” – Ai Weiwei

The artist was furious and sued for damages. The case reached court this week and SMC has now been ordered to pay 1.5 million Danish kroner for the unlawful use of the work and an additional 250,000 for non-financial damages. In response, Mr Ai had accused VW’s CEO Herbert Diess of turning a blind eye to human rights abuses in China, where the company is expanding production. “Volkswagen’s conduct towards my artwork is a small reflection of a global lack of respect for the rights of individuals today”. 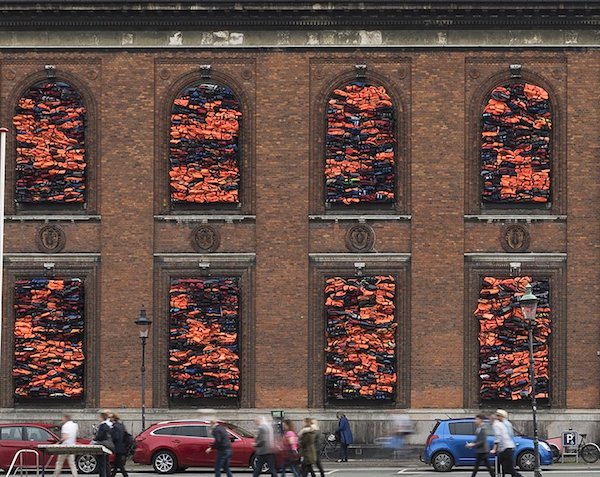 The artwork (used as a backdrop) is titled “Soleil Levant”. It displays 3,500 life jackets collected from refugees who had arrived on the Greek island of Lesbos between 2015 and 2016. The lifejackets were displayed in the windows of the Charlottenborg art gallery to illustrate how desperate the migration crisis has grown.

The court agreed that the misuse of concept and imagery could be detrimental to the artist’s reputation and a “clear contradiction of the considerations and thoughts behind the work.”

“The infringing material was circulated to over 200,000 people, giving the false impression that I had authorised Volkswagen to use my artwork in its ad for the new Polo,” he said.

Ai Weiwei was born in 1957 in Beijing and now lives and works in Berlin. He attended Beijing Film Academy and later, on moving to New York (1983–1993), continued his studies at the Parsons School of Design.

A global citizen, artist and thinker, Ai Weiwei moves between modes of production and investigation, subject to the direction and outcome of his research, whether into the Chinese earthquake of 2008 (for works such as Straight, 2008-12 and Remembering, 2009) or the worldwide plight of refugees and forced migrants (for Law of the Journey and his feature-length documentary, Human Flow, both 2017). From early iconoclastic positions in regards to authority and history, which included Dropping a Han Dynasty Urn and a series of middle-finger salutes to sites of power, Study of Perspective (both 1995).

Ai’s production expanded to encompass architecture, public art and performance. Beyond concerns of form or protest, Ai now measures our existence in relation to economic, political, natural and social forces, uniting craftsmanship with conceptual creativity. Universal symbols of humanity and community, such as bicycles, flowers and trees, as well as the perennial problems of borders and conflicts are given renewed potency though installations, sculptures, films and photographs, while Ai continues to speak out publicly on issues he believes important. He is one of the leading cultural figures of his generation and serves as an example of free expression both in China and internationally.