Should a portrait of a robot be allowed to be nominated for the prestigious Taylor Wessing Photographic Portrait Prize? This year, the jury has selected one as part of the three photographers shortlisted for the 2017 competition. This major international photography award organised by the National Portrait Gallery, London, celebrates its tenth anniversary under Taylor Wessing‘s sponsorship this year.

The prize-winning portraits include photographs of a migrant rescued in the Mediterranean Sea off the Libyan coast; a girl fleeing ISIS in Mosul, Iraq; and a Japanese android called Erica.

The annual Taylor Wessing Photographic Portrait Prize is one of the most prestigious photography awards in the world and showcases new work that has been submitted by some of the most exciting contemporary photographers. Since the international competition began in 1993, it has remained a hugely important platform for portrait photographers and offers an unparalleled opportunity for celebrated professionals, emerging artists and amateurs alike.

Judged anonymously, the diversity of styles in the exhibition reflects the international mix of entries as well as photographers’ individual and varied approaches to the genre of portraiture. Photographers were again encouraged to submit works as a series in addition to stand-alone portraits, and there was no minimum size requirement for prints.

In the competition’s first year of digital entry, the prize-winning photographs and those selected for inclusion in the exhibition were chosen from 5,717 submissions entered by 2,423 photographers from 66 countries. A total of 59 portraits from 50 artists were selected for display, of which 18 were part of a series.

This year’s exhibition will also feature previously unseen prints from a new body of work by American photographer Todd Hido. The prints will form the third In Focus display, an annual showcase for new work by an internationally renowned photographer, which will be exhibited alongside the photographs selected from the competition entries. Hido is a San Francisco Bay Area-based artist whose work has been featured in Artforum, The New York Times Magazine, Eyemazing, Wired, Elephant, FOAM, and Vanity Fair. His photographs are in the permanent collections of the Getty, the Whitney Museum of Art, the Guggenheim Museum, New York, San Francisco Museum of Modern Art, the de Young, the Smithsonian and the Los Angeles County Museum of Art.

The following three photographs have been shortlisted for the Taylor Wessing Photographic Portrait Prize 2017:

César Dezfuli (10.01.1991) was born in Madrid of Spanish-Persian origins. He works as journalist and documentary photographer and focuses on issues of migration, identity, and human rights. The sitter Amadou Sumaila was photographed in the Mediterranean Sea, in international Waters 20 nautical miles off the Libyan coast. He has since been transferred from a rescue vessel to a temporary reception centre for migrants in Italy. The portrait was taken as part of Dezfuli’s work as a freelancer, documenting the search and rescue of migrants on board an NGO vessel in the Central Mediterranean Route. 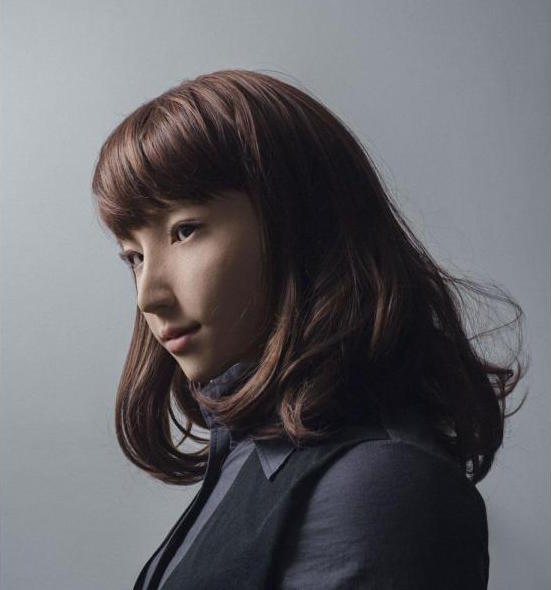 One of Them Is a Human #1 by Maija Tammi

One of Them Is a Human #1 by Maija Tammi (Erica: Erato Ishiguro Symbiotic Human-Robot Interaction Project.)

Maija Tammi (05.06.1985) is a Finnish artist, with a background in photojournalism, whose photographs engage with science and aesthetics. Tammi’s work has been exhibited in Europe, North America, and Asia. She regularly works with scientists and is currently finishing her studio-art-based doctoral thesis. Tammy’s photograph portrays Erica, an android from Hiroshi Ishiguro Laboratories. One of Them Is a Human #1 is part of a broader series which presents androids alongside one human and asks questions about what it means to be alive. The photograph was taken at Ishiguro Laboratory, Department of Systems Innovation at Osaka University, in an experiment room where researchers work with Erica. “I had half an hour with Erica and a young researcher in which to take the photograph. The researcher told me that Erica had said that she finds Pokemon Go scarier than artificial intelligence.”

Fleeing Mosul from the series Women in War: Life After ISIS  by Abbie Trayler-Smith

Abbie Trayler-Smith (20.05.1977) is a documentary and portrait photographer born and raised in South Wales. Travelling extensively her work covers women’s rights, social development and the aftermath of conflict. Her shortlisted photograph was shot outside Hasan Sham IDP camp in Northern Iraq. Trayler-Smith was there undertaking a commission for Oxfam documenting the camp where the charity was providing aid, talking to women who had lived under ISIS who were prepared to be photographed. A convoy of buses arrived from Mosul, bringing people to safety who had escaped the battle just hours before. ‘I just remember seeing her face looking out at the camp,’ says Trayler-Smith,’ and the shock and the bewilderment in her’s and other’s faces and it made me shudder to imagine what living under ISIS had been like. To me the uncertainty in her face echoes the faces of people having to flee their homes around the world and references a global feeling of insecurity.’

As well as the three prize-winners, the exhibition will feature the John Kobal New Work Award. For the sixth consecutive year, this will be awarded to a photographer whose work has been selected for the exhibition. The winning photographer will receive a cash prize of £5,000 to include undertaking a commission from the Gallery to photograph a sitter connected with the UK film industry. For the second year, the prize will be awarded to a photographer under the age of thirty-five. Previously the award was for photographers under the age of thirty.

Dr. Nicholas Cullinan, Director, National Portrait Gallery, London, says: ‘The submission for this year’s Taylor Wessing Photographic Portrait Prize, was exceptionally strong and the resulting exhibition consists of a range of photographic subjects that is truly global in its scope and concerns. The Gallery looks forward to welcoming visitors to this annual showcase of the finest contemporary portrait photography.’

Tim Eyles, the Managing Partner at Taylor Wessing LLP, says: ‘To be on the judging panel of such a world-renowned competition, in our tenth year of sponsorship, is a true privilege. Year in year out the quality of images remains exceptional. This year was no different with digital submissiounited-kingdom.taylorwessing.com/…/photographic-portrait-prize-2017-shortlist-announced-in-10th-anniversary-yearns adding a new creative twist.  Those attending the exhibition will enjoy a truly special artistic treat.’

The prizes for the Taylor Wessing Photographic Portrait Prize 2017 and the winner of the sixth John Kobal New Work Award will be announced on Tuesday 14 November 2017 at 19.00.