The American rock legend Alice Cooper has auctioned a painting by Andy Warhol, ‘Little Electric Chair’ Red (1964). Unfortunately it did not sell. The silkscreen on canvas lay in storage for over 40 years. “We found it rolled up in a tube,” said Cooper. It sat in a lock-up garage with stage sets and memorabilia from his’ Schools Out’ tour in the early 1970s. The painting from the Death and Disaster series is one of Warhol’s most powerful images. It carried an estimate of $2.5-£4.5m at the little-known Larsen Art Auction in Scottsdale, Arizona.

Unsigned and undocumented work by Warhol is difficult

The work had been authenticated by Richard Polsky, a self-styled expert in the field of Pop and Post Pop Art. Polsky has written on his website; “Richard Polsky Art Authentication validates Warhol paintings, drawings, prints, and sculpture. We specialise in authenticating Warhol paintings which for various reasons never made it into the Andy Warhol Catalogue Raisonné. The same can be said for works examined and rejected by the Andy Warhol Art Authentication Board, which was dissolved in 2011 after a huge scandal involving numerous lawsuits. Silkscreens from Warhol’s Marilyn print series, paintings from his extensive series of Self-Portraits, and plywood Box sculptures (Brillo, Kelloggs Corn Flakes, etc) are a speciality.

Polsky adds, There are three Significant Authentication Issues: Subject Matter: The most commonly forged series are the “Little Electric Chair” paintings, “Flowers” paintings, and “Marilyn” prints. Signature: During the Factory days, Warhol sometimes had others sign his work for him, leading to confusion over what constitutes a genuine signature (and whether the signature helps determine authenticity) Screening: The quality of the screened image is an underrated factor in evaluating authenticity, largely because forgers have trouble creating accurate screens. 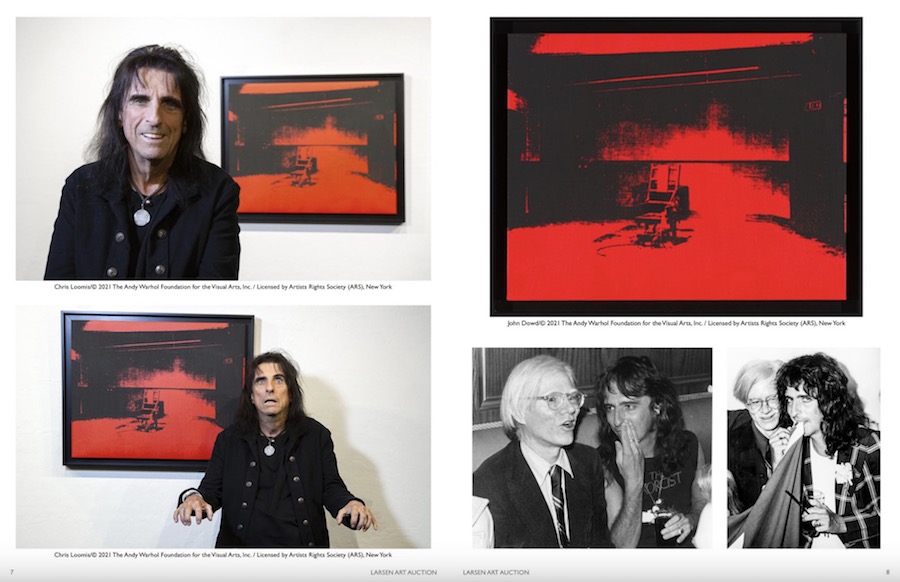 Cooper first met Warhol in New York in the 1960s. By 1970, the pair would hang out together at Max’s Kansas City, a notoriously hip nightclub. The club was inhabited by Warhol Superstars, drag queens, male hustlers, while the resident band was The New York Dolls. Cooper’s then-girlfriend, the Revlon model Cindy Lang. She was the fixer for the art purchase offering Warhol $2500 for the 1964 canvas.

Unsigned and undocumented work by Warhol is difficult. This was no exception. A few years back, there was a noteworthy controversy when the British collector, Joe Simon, presented Red Self-portrait to the authentication panel in New York. The board refused to endorse it, stamping the back denied. One picture in the series, now owned by the London dealer/collector Anthony d’Offay, was actually signed and dated by Warhol. The dedication was in his own handwriting signed to his longtime business partner, the Zurich-based art dealer Bruno Bischofberger (“To Bruno B Andy Warhol 1969”).

Live On the Floor At Larsen Art Auction

This ‘Little Electric Chair’ painting was the property of the Collection of Alice and Sheryl Cooper gifted from Cindy Lang, who appeared on the cover of Andy Warhol’s Interview Magazine in 1973. She acquired it directly from the Andy Warhol Factory in 1971/72. Richard Polsky has unofficially published an Addendum to the Warhol Catalogue Raisonné. He believes the provenance of the Cooper Silkscreen is correct and has dated it to 1964 or 1965. A question remains, why wasn’t this painting sold through Sotheby’s or Christie’s? Was it denied?