Interview magazine has ceased publishing with immediate effect and closed their New York office. The 50-year old stalwart of NY chic founded by Pop Artist Andy Warhol has suffered months of turmoil, with lawsuits filed by former employees of the magazine. Born in 1969, Interview was known as a cutting-edge art, fashion, entertainment and culture barometer.

This was a magazine that changed the goal posts in publishing

Interview has relaunched multiple times over the past several decades, once in 1990 and again in 2008 when billionaire Peter Brant a well known art collector, acquired the title in 1989. Under the editorship of Bob Colacello the magazine became much more of a mainstream entity. 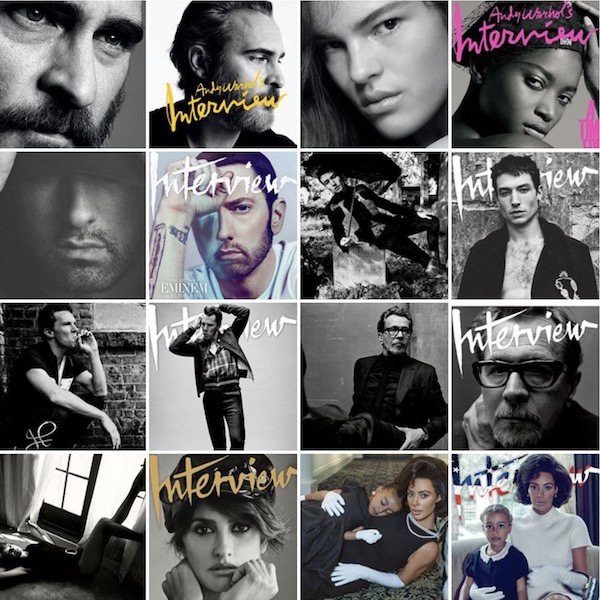 The end of the road came after a lock out for non-payment of rent, a lawsuit claiming $600,000 owed by a former editorial director plus allegations of sexual harassment and misconduct levelled against former creative director Karl Templer. He left the publication in April, two months after an explosive Boston Globe report accused him of acting very inappropriately with three female models. Several outlets reported that the magazine is entering Chapter 7 Bankruptcy. Court filings were not available at publication time, but Interview Inc. provided the following statement:

“Yesterday, Interview, Inc. (the “Company”), which owns and publishes Interview Magazine, and its two holding companies, sought protection under Chapter 7 of the United States Bankruptcy Code. The Company has been operating at a financial loss, and had been funding its losses and costs of its operation through loans obtained from its secured lender. The losses, however, continued to mount, and the Company did not believe its financial condition would improve in the foreseeable future.”

The magazine offices were closed yesterday Phone calls placed to a number listed on Interview‘s website went unanswered; the line appeared to have been disconnected.