The winner of the Art Fund UK’s most popular acquisition in 2018 is an Anglo-Saxon gold pendant, found in Winfarthing, Norfolk and purchased by Norwich Castle Museum and Art Gallery. It was announced this morning 18 December. The work of art was bought with Art Fund support in the last 12 months. It is currently on display at the British Library as part of its Anglo-Saxon Kingdoms exhibition.The Art Funds shortlist of works for the honour of Britain’s favourite work of art included contemporary work by Grayson Perry, Turner Prize winner Lubaina Himid, Yinka Shonibare MBE and Kehinde Wiley.

Other artists Artemisia Gentileschi’s Self-Portrait as Saint Catherine of Alexandria at the National Gallery, Leonora Carrington’s Portrait of Max Ernst at National Galleries of Scotland, an unknown artist’s Am, not I a man and a brother at the International Slavery Museum, a painting by the Scottish artist John Bellany and Eric Ravilious’s painting of Beachy Head. 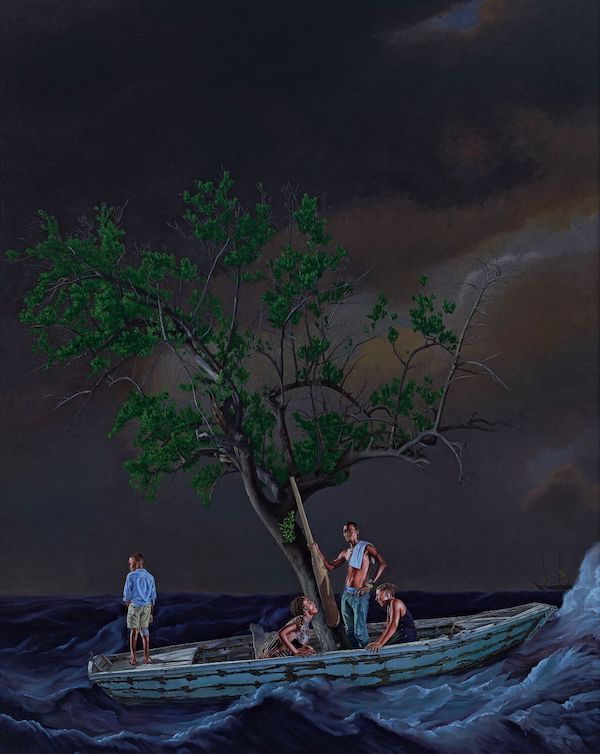 The gold pendant was voted the nation’s favourite acquisition of the year from a shortlist of 10 works of art and objects that the Art Fund helped UK museums to buy in 2018. 5,000 members of the public voted.
Dr Tim Pestell, Senior Curator of Archaeology at Norfolk Museums Service, said: ‘We are absolutely thrilled that the Winfarthing Pendant has been named as Britain’s favourite work of art in the Art Fund’s annual poll, especially so given the quality of this year’s shortlist which contained some truly remarkable works. It’s intriguing to think what the pendant’s seventh-century creator would make of the lasting appeal of their masterpiece, well over a millennium after it was first crafted. We’d like to say a huge thank you to everyone that voted for this unique treasure, and we’re looking forward to it going back on display in the Anglo-Saxon and Viking Gallery here at Norwich Castle in spring 2019, after it returns from its loan to the British Library for Anglo-Saxon Kingdoms: Art, Word, War.’

Discovered in December 2014 by a metal detector enthusiast, the seventh-century gold and garnet pendant is the highlight of a trove of artefacts unearthed in Winfarthing, near Diss. The excavation, carried out by Norfolk County Council’s Find Identification and Recording Service, found the grave to belong to an aristocratic Anglo-Saxon lady who died between AD 650-675 and was buried among some of her most valued possessions.

The pendant was declared treasure under the 1996 Treasure Act and was purchased in 2018 by Norwich Castle Museum and Art Gallery with support from the National Heritage Memorial Fund, Art Fund and the Friends of Norwich Museums.

Art Fund is the national fundraising charity for art. In the past five years, alone Art Fund has given £34 million to help museums and galleries acquire works of art for their collections. It also allows museums to share their collections with wider audiences by supporting a range of tours and exhibitions and makes additional grants to help the training and professional development of curators. Art Fund is independently funded, with the core of its income provided by 139,000 members who receive the National Art Pass and enjoy free entry to over 240 museums, galleries and historic places across the UK, as well as 50% off admission to significant exhibitions and subscription to Art Quarterly magazine. In addition to grant-giving, Art Fund’s support for museums includes the Art Fund Museum of the Year (won by Tate St Ives in 2018) and a range of digital platforms.