The Turner Prize-winning artist Sir Anish Kapoor has spoken out against the use of an image of his Chicago sculpture “Cloud Gate” in a right-wing NRA (National Rifle Association) pro-gun video.

The video plays to the basest and most primal impulses of paranoia, conflict and violence – AK

The work of art appears in a brief clip which references the city’s most famous resident, former President Barack Obama. The video is narrated by the NRA spokesperson Dana Loesch a reactionary conservative talk radio host.

Today (Monday), the artist spoke out for the first time, condemning “the NRA’s nightmarish, intolerant, divisive vision” that “perverts everything that Cloud Gate — and America — stands for.” “It plays to the basest and most primal impulses of paranoia, conflict and violence, and uses them to create a schism to justify its most regressive attitudes,” wrote Kapoor. “Hidden here is a need to believe in a threatening ‘Other’ different from ourselves.” ( Read Full statement below) 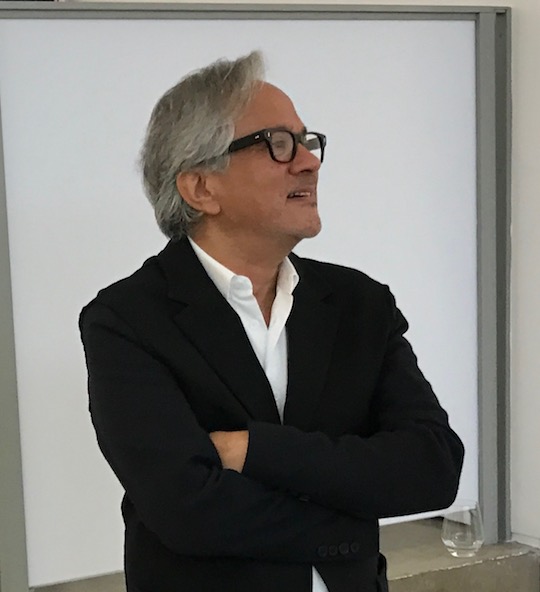 “Last year an image of my work Cloud Gate (in Millennium Park Chicago) was used without my consent in a politicised advertisement for the National Rifle Association (NRA), entitled The Clenched Fist of Truth. The NRA’s ‘advertisement’ -as they describe the video on their own website – seeks to whip up fear and hate. It plays to the basest and most primal impulses of paranoia, conflict and violence, and uses them in an effort to create a schism to justify its most regressive attitudes. Hidden here is a need to believe in a threatening ‘Other’ different from ourselves. I am disgusted to see my work – in truth the sculpture of the people of Chicago – used by the NRA to promote their vile message. Recent shootings in Florida, Las Vegas, Texas, and a number of other towns and cities, make it more urgent than ever that this organization is held to account for its ongoing campaign of fear and hate in American society.

Cloud Gate reflects the space around it, the city of Chicago. People visit the sculpture to get married, to meet friends, to take selfies, to dance, to jump, to engage in communal experience. Its mirrored form is engulfing and intimate. It gathers the viewer into itself. This experience, judging by the number of people that visit it every day (two-hundred million to date), still seems to carry the potential to communicate a sense of wonder. A mirror of self and other, both private and collective, Cloud Gate – or the ‘Bean’ as it often affectionately referred to -is an inclusive work that engages public participation. Its success has little to do with me, but rather with the thousands of residents and visitors who have adopted it and embraced it as their ‘Bean’. Cloud Gate has become a democratic object in a space that is free and open to all.

In the NRA’s vile and dishonest video, Cloud Gate appears as part of a montage of iconic buildings that purport to represent ‘Liberal America’ in which the ‘public object’ is the focus of communal exchange. Art seeks new form, it is by its nature a dynamic force in society. The NRA in it’s nationalist rhetoric uses Cloud Gate to suggest that these ideas constitute a ‘foreign object’ in our midst. The NRA’s video gives voice to xenophobic anxiety, and a further call to ‘arm’ the population against a fictional enemy.

The NRA’s nightmarish, intolerant, divisive vision perverts everything that Cloud Gate – and America – stands for. Art must stand clear in its mission to recognise the dignity and humanity of all, irrespective of creed or racial origin.

Gun violence in the United States affects every citizen of your country-all religions, all cultures, all ages. The NRA’s continued defence of the gun industry makes them complicit in compromising the safety of the many in favour of corporate profit. I support Everytown for Gun Safety and their efforts to build safer communities for everyone across the United States.

Sir Anish Kapoor was born in Bombay, India in 1954 and lives and works in London. He studied at Hornsey College of Art (1973–77) followed by postgraduate studies at Chelsea School of Art, London (1977–78). Recent major solo exhibitions include Sakıp Sabancı Museum, Istanbul (2013); Martin Gropius Bau, Berlin (2013); Museum of Contemporary Art, Sydney (2012); Le Grand Palais, Paris (2011); Mehboob Studios, Mumbai and National Gallery of Modern Art, New Delhi (2010); Royal Academy of Arts (2009) and the Turbine Hall, Tate Modern, London (2002). He represented Britain at the 44th Venice Biennale (1990), for which he was awarded the Premio Duemila. He won the Turner Prize in 1991 and has honorary fellowships from the London Institute and Leeds University (1997), the University of Wolverhampton (1999) and the Royal Institute of British Architecture (2001). He was awarded a CBE in 2003 and a Knighthood in 2013 for services to visual arts.

The sculpture and AT&T Plaza are located on top of Park Grill, between the Chase Promenade and McCormick Tribune Plaza & Ice Rink. Constructed between 2004 and 2006, the sculpture is nicknamed The Bean because of its shape. Made up of 168 stainless steel plates welded together, its highly polished exterior has no visible seams. It measures 33 by 66 by 42 feet (10 by 20 by 13 m), and weighs 110 short tons (100 t; 98 long tons).

Kapoor’s design was inspired by liquid mercury and the sculpture’s surface reflects and distorts the city’s skyline. Visitors are able to walk around and under Cloud Gate’s 12-foot (3.7 m) high arch. On the underside is the “omphalos” (Greek for “navel”), a concave chamber that warps and multiplies reflections. The sculpture builds upon many of Kapoor’s artistic themes, and it is popular with tourists as a photo-taking opportunity for its unique reflective properties.

The sculpture was the result of a design competition. After Kapoor’s design was chosen, numerous technological concerns regarding the design’s construction and assembly arose, in addition to concerns regarding the sculpture’s upkeep and maintenance. Various experts were consulted, some of whom believed the design could not be implemented. Eventually, a feasible method was found, but the sculpture’s construction fell behind schedule. It was unveiled in an incomplete form during the Millennium Park grand opening celebration in 2004, before being concealed again while it was completed. Cloud Gate was formally dedicated on May 15, 2006, and has since gained considerable popularity, both domestically and internationally.