The exhibition will feature 21 sculptures as well as a selection of drawings and smaller works representative of Kapoor’s groundbreaking body of work created over the past 40 years. Presented together, this series of works will challenge the classical architecture of the house and the idyllic beauty of the grounds, while being in continuous dialogue and engagement with Houghton’s history. 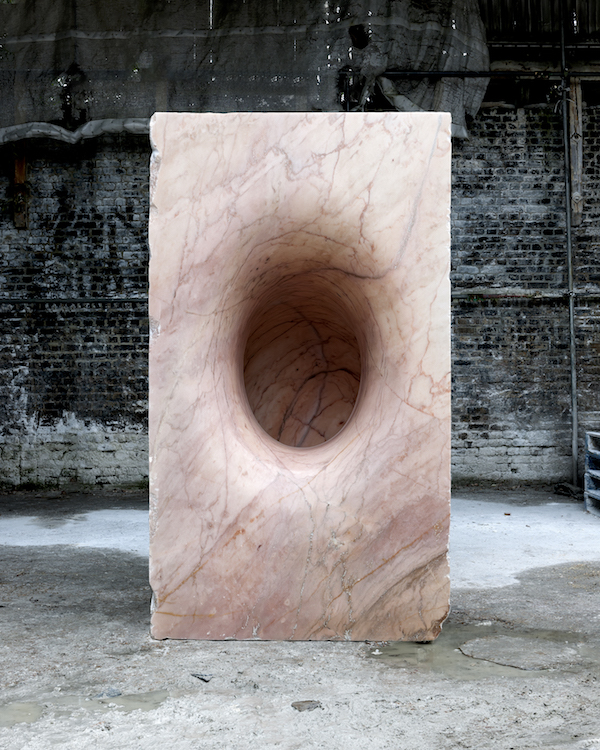 Anish Kapoor is one of the most influential sculptors working today, known for creating ambitious public sculptures adventurous in both form and engineering across vastly different scales and materials.

Curated by Mario Codognato, the exhibition at Houghton will feature some of Kapoor’s significant works in mirror and stone, including Sky Mirror (2018) – a 5-metre diameter mirror of stainless steel that reflects and transforms the space around it, turning the world upside down – and a series of carved marble sculptures created in 2001 – 2003 which will be displayed across the grounds. Several works will also be shown inside the house, including a series of dramatic sandstone sculptures which will be presented in the gallery spaces.

Lord Cholmondeley, of Houghton, said: “Anish Kapoor is a magician. His elegant reflective pieces throwback the world in mysterious ways. We are proud to have the opportunity to present an important group of Anish Kapoor’s work at Houghton, both inside the house and in the gardens and grounds.”

Houghton Hall was built by Sir Robert Walpole, Great Britain’s first Prime Minister in around 1722. Designed by prominent Georgian architects Colen Campbell and James Gibbs, it is one of the country’s finest examples of Palladian architecture. Houghton and its estate passed to the Cholmondeley family at the end of the 18th Century and remains a family home. The house and award-winning gardens have been open to the public since 1976.

Anish Kapoor was born in Mumbai, India, in 1954 and lives and works in London. He studied at Hornsey College of Art, London, UK (1973–77) followed by postgraduate studies at Chelsea School of Art, London, UK (1977–78). He represented Britain at the 44th Venice Biennale for which he was awarded the Premio Duemila and won the Turner Prize in 1991. In 2013 he received a knighthood for his services to the arts. Perhaps most famous for public sculptures that are both adventures in form and feats of engineering, he manoeuvres between vastly different scales, across numerous series of work. Immense PVC skins, stretched or deflated; concave or convex mirrors whose reflections attract and swallow the viewer; recesses carved in stone and pigmented so as to disappear: these voids and protrusions summon up deep-felt metaphysical polarities of presence and absence, concealment and revelation. Forms turn themselves inside out, womb-like, and materials are not painted but impregnated with colour, as if to negate the idea of an outer surface, inviting the viewer to the inner reaches of the imagination. Kapoor’s geometric forms from the early 1980s, for example, rise up from the floor and appear to be made of pure pigment, while the viscous, blood-red wax sculptures from the last ten years – kinetic and self-generating – ravage their own surfaces and explode the quiet of the gallery environment. There are resonances with mythologies of the ancient world – Indian, Egyptian, Greek and Roman – and with modern times, where 20th century events loom large.

Mario Codognato was since 2005 the chief curator of MADRE, the new museum of contemporary art in Naples, where he has curated, among others, the retrospectives of the work of Jannis Kounellis (2006), Rachel Whiteread (2007), Thomas Struth (2008) and Franz West (2010). He has previously worked at the contemporary art project at the Archaeological Museum in Naples, where he curated exhibitions of Francesco Clemente (2002), Jeff Koons (2003), Anish Kapoor (2003), Richard Serra (2004), Anselm Kiefer (2004) and the first-ever museum retrospective of Damien Hirst (2004). He has curated several thematic exhibitions, including Barock at MADRE in 2009 and Fragile? at the Cini Foundation in Venice in 2013. From 2014 to 2016 he was chief curator at the 21er Haus of the Belvedere in Vienna, where he has curated among others, the retrospective exhibitions of Olafur Eliasson, Tomas Saraceno and Sterling Ruby, and the exhibition “Sleepless” on the history and role of the bed in art. Since 2016 he is director of the Anish Kapoor Foundation.

Presented by Houghton Hall. Supported by Dorotheum. With support from Lisson Gallery.

How Much Do You Know About Anish Kapoor