The first retrospective for nearly a century of the Manchester-born painter Annie Swynnerton (1844–1933) has opened at the Manchester Art Gallery 23 February 2018– 6 January 2019.

In many ways, Swynnerton was pioneering because of the scarcity of women painters in a male-dominated profession. For one thing, women were excluded from painting nude life models, so she had to travel to Paris and Rome to hone her practice. As a painter of allegorical, figure and portrait paintings this was a necessity.

She represented women of all ages and walks of life, challenging conventions of beauty

Swynnerton studied at Manchester School of Art, Académie Julian, and in Rome. She was heavily influenced by George Frederic Watts and Edward Burne-Jones. John Singer Sargent championed her work and helped her to be the first elected woman member of the Royal Academy of Arts London in 1922. (Dame Laura Knight became the first woman elected to full membership of the Royal Academy in 1936). 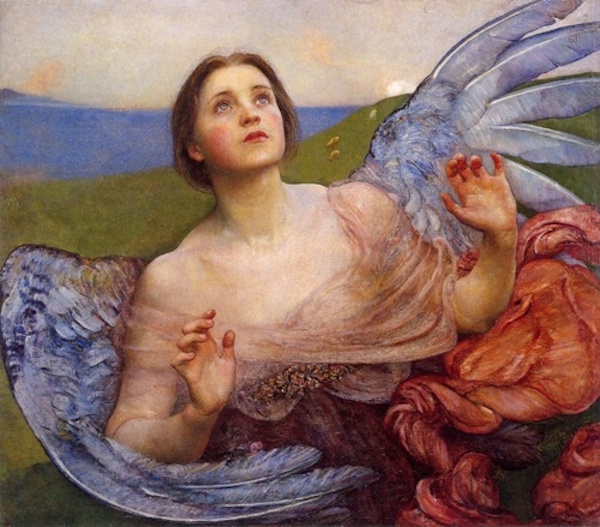 Her lengthy career led to painting portraits of Henry James and Millicent Fawcett (leading Suffragist and campaigner for equal rights for women). Her works are in collections in the England, Scotland, and abroad. She was married to sculptor Joseph Swynnerton, and they lived for many years in Rome.

Painting Light and Hope features 36 paintings from across Swynnerton’s career, including 13 from Manchester Art Gallery’s collection with further loans from public galleries including the Royal Academy Collection, Tate and the Walker Art Gallery, Liverpool. The exhibition also features a number of rarely seen paintings on loan from private collections.

Portraits showing the artist’s Manchester connections open the exhibition including Susan Dacre, with whom she co-founded the Manchester Society of Women Painters, and the Reverend William Gaskell, husband of novelist Elizabeth Gaskell. The exhibition also brings together landscapes, allegorical works and later portraits revealing her as a continually inventive artist who engaged with current art movements and forged her own independent style shaped by her experience of light and colour in Italy.

Swynnerton first visited Rome in 1874, living for extended periods there between 1883 and 1910. The impact of Italy comes through in the vibrant colours and gestural paint of her portrayals of women that are a highlight of this exhibition. She represented women of all ages and walks of life, challenging conventions of beauty and capturing female power, strength, hope and potential at a time when women’s roles and opportunities were changing. Her shimmering nudes, winged figures and portraits of suffragettes show the importance of female networks and solidarity to Swynnerton’s art. Her portrait of suffragist Dame Millicent Fawcett, founder of the National Union of Women’s Suffrage Societies, will be on loan from Tate.

As well as being a successful artist, Swynnerton was a passionate supporter of women’s right to vote for over three decades, signing the Declaration in Favour of Women’s Suffrage in 1889 and a claim for women’s suffrage in 1897, both organised by the Central Committee for the National Society for Women’s Suffrage. She also campaigned for better opportunities for women artists, setting up the Manchester Society of Women Painters, and challenging the Manchester Academy of Fine Arts to open up membership, exhibitions and training to women.

Swynnerton exhibited internationally, including at the Salon de la Société Nationale des Beaux-Arts, Paris in 1905. This brought her to the attention of Auguste Rodin who praised her work. Like Rodin, in her later paintings, Swynnerton experimented with figurative abstraction. Manchester Art Gallery’s Rodin sculptures Eve and The Age of Bronze will be on display during the exhibition run.