Art Basel Switzerland which is always an important barometer in the art market has reported that some of the world’s premier galleries experienced remarkable sales across all levels of the market.

The fair in Basel closed on Sunday, June 17, 2018, amid reports of significant sales to private collections and institutions by galleries across all market sectors. Once more, Art Basel drew in a particularly strong turnout of both established and new collectors, from over 100 countries, with exceptionally robust attendance from Europe and Asia. The show took place at Messe Basel from June 14 to June 17, 2018, and attracted an attendance of nearly 95,000 and once again proved to be a crucial meeting place for the international art world. 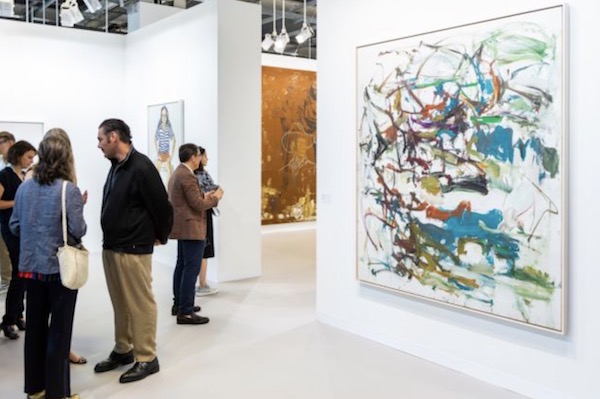 Galleries exhibiting in all sectors of Art Basel were positive at this year’s show:

‘This has been our most successful fair in the history of the gallery.’ Stefan von Bartha, Director, von Bartha, Basel, S-chanf

‘Our participation at Art Basel in Basel this year represents our first presentation in the Galleries sector, which allowed us to present our program in depth and bring powerful artworks by our best artists. The response was great — we met new people, and we had many visits from important institutions on the first day. This is clearly the best fair in the world!’ Thiago Gomide, Owner, Bergamin & Gomide, São Paulo 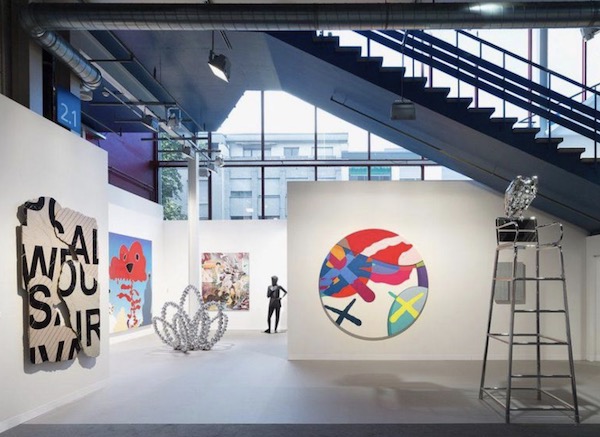 ‘I love the diversity of the platform, and the art is full of pleasant surprises. I have also been really pleased with the attendance and the level of interest we have been receiving the two artists from India and China, Nilima Sheikh and Qiu Zhijie. Reception from European collectors and museums have been particularly encouraging.’
Johnson TZ Chang, Founder and Director, Hanart TZ Gallery, Hong Kong

‘We had a fantastic experience this year at Art Basel in the Statements sector, where we exhibited work by Doreen Garner, introducing her work to many incredible collections in Europe, Asia and America. We placed the centrepiece of the booth with an amazing collection here in Europe, and look forward to the coming months and the opportunities that come from what began here in Statements.’ Jasmin Tsou, Founder and Owner, JTT, New York

‘I continue to be impressed by the very serious old and new European buyers, including many museums. You can tell there is trust in Art Basel as the original art fair that can only be built over time. The excellent museum shows such as Bruce Nauman at Schaulager, and Bacon-Giacometti at Fondation Beyeler held visitors’ attention around the city as well, and we’re pleased with the works we placed in institutions in the US, Europe and Asia. It was a great year for women artists—Mary Corse, Lee Bul, Teresita Fernández all had major sales.’  Rachel Lehmann, Co-Founder, Lehmann Maupin, New York, Hong Kong

‘We began the week with our John Baldessari show at the gallery during Zurich Gallery Weekend, which was extremely successful. Things kicked off very well at Art Basel, and we have made sales throughout the week, including the weekend.’ Victor Gisler, Owner, Mai 36 Galerie, Zurich

‘We were thrilled to be at Art Basel 2018 with two very strong and distinct presentations, including a solo presentation of works by the Brazilian artist Paulo Bruscky and an important work by Paul Ramirez Jonas in Unlimited. Galeria Nara Roesler is proud to continue in our support of these two artists, and there is no better forum for us to do so than among the international audience of art lovers at Art Basel.’ Alexandre Roesler, Partner and Senior Director, Galeria Nara Roesler, São Paulo, Rio de Janeiro, New York

‘This year’s Art Basel stands out as one of the most successful for Galerie Thaddaeus Ropac in our history of participating at this pre-eminent fair. Even before the fair opened, we noticed that the interest and enthusiasm for what we were bringing to the fair was at an all-time high, and there was a sustained palpable excitement of both the discerning collectors and the significant number of important institutions on our stand.’ Thaddaeus Ropac, Owner, Galerie Thaddaeus Ropac, London, Paris, Salzburg

‘Art Basel is a barometer for the art world, and it’s interesting to see collectors enthusiastically returning every year, looking for new works by our artists. I was especially pleased with the number of institutions and museums that visited the fair and our booth; and to see Marwan get the attention that he deserves and some of his works join prestigious collections.’ Andrée Sfeir-Semler, Owner, Sfeir-Semler Gallery, Hamburg, Beirut

‘For this year’s show, the gallery brought together a number of significant artists whose works have a timely political and social relevance to the current climate. At the same time, we showed George Condo, Sterling Ruby, Andro Wekua and Rosemarie Trockel in regards to the recent painterly discourse. It was a concept that the collectors really connected with that reflected in the sales. We were happy to have placed these important works in collections across Europe, Asia and the US, reaffirming Art Basel as the leading international fair.’
Monika Sprüth, Co-Owner, Sprüth Magers, Berlin, London, Los Angeles

‘It is wonderful to see a growing group of friends from our part of the world make the annual pilgrimage to Basel. Collectors seemed to have noticed the recent biennales in Dakar and Berlin, based on the interest at the fair in the work of Portia Zvavahera, Meschac Gaba and Moshekwa Langa. All in all, this has been our best year yet.’
Joost Bosland, Partner, Stevenson, Cape Town, Johannesburg

‘Art Basel in Basel has been fantastic. The most exciting aspect of this year’s edition has been the fact that we sold works to many of our Asian clients, with whom we have been building relationships over the past several years by participating in Art Basel in Hong Kong.’
Lisa Spellman, Owner, 303 Gallery, New York

‘We are very pleased with the fair’s ability to attract new collectors. Of course, we love to see our returning clients each year, but we are also very excited to place works in different countries and in new collections. This year we met new clients from India, China, Russia, Turkey and Bangladesh and are thrilled to be sending our artists’ works out into the world!’
Evelyn Lasry, Owner, Two Palms, New York

‘It was a privilege to participate in the Galleries sector for the first time in Art Basel as it definitely helped us promote our program dedicated to the arts of East Asia. The sales result was wonderful and it proved that the interest for modern and contemporary Asian art continues to grow among the collectors and institutions around the world.’
Hozu Yamamoto, Gallery Owner, Tokyo Gallery + BTAP, Beijing, Tokyo

‘It was magnificent to participate in the Feature sector this year. We met top museum curators who also bought works from the stand. We are so happy that we could introduce Marinus Boezem, a conceptual artist from the 1960s, to a new audience.’
Martijn Dijkstra, Co-Owner, Upstream Gallery, Amsterdam

‘It’s been our honor to participate at Art Basel’s Basel show for the first time. Our presentations at both the Statements and the Unlimited sectors have received great response from art institutions, curators and collectors. We’ve sold all the works on display.’
Zhang Di, Director and Partner, White Space Beijing, Beijing

Galleries
The main sector of the show presented 227 of the world’s leading galleries showing painting, sculpture, drawing, installation, photography, video and editioned works of the highest quality. Overall, the gallery sector was rejuvenated by ten galleries participating in Galleries for the first time. 47 Canal, Alexander Gray Associates, Bergamin & Gomide, Casas Riegner, Kadel Willborn, Kate MacGarry, KOW, Mendes Wood DM, mother’s tankstation limited and Tokyo Gallery + BTAP joined the main sector of the fair having previously exhibited in Feature and Statements. These additions reflected Art Basel’s efforts to steadily bring younger galleries and the next generation of Modern galleries into the main sector of the fair, where they can show the full range of their programs. For the full list of exhibitors in Galleries, please visit artbasel.com/basel/galleries.

Feature: 31 galleries presented ambitiously curated projects by both historical and contemporary artists in the Feature sector, with six galleries entirely new for the show. Highlights from the sector included: Jef Geys at Galerie Max Mayer, Lubaina Himid at Hollybush Gardens and Nil Yalter at Galerist. For the full exhibitor list for Feature, please visit artbasel.com/basel/feature.

This year marked the 20th anniversary of the Baloise Art Prize, which was awarded to Suki Seokyeong Kang at One and J. Gallery and Lawrence Abu Hamdan at mor charpentier. A jury of international experts awarded CHF 30, 000 to each artist, and their works were acquired by the Baloise Group and donated to MUDAM Luxembourg and the Museum für Gegenwart, Berlin.

Film: Consisting of 16 film and video works presented by the show’s participating galleries, Art Basel’s Film program was curated for the fourth year by Cairo-based film curator Maxa Zoller. This year’s program sought to attribute new meanings to found footage within filmmaking and brought together leading artists from across the world, with a strong focus on South Africa. The Art Basel Film program was screened at the Stadtkino Basel and was attended by about 600 visitors. For the full program, please visit artbasel.com/basel/film.

Conversations: Art Basel’s renowned talks series brought together leading artists, gallerists, collectors, art historians, curators, museum directors and critics from across the world. Programmed for the fourth year by Mari Spirito, Founding Director of Protocinema, Istanbul, the program featured 25 talks and served as a platform for dialogues and discussions on current topics such as sexism in the art world to blockchain technology, and offered perspectives on producing, collecting and exhibiting art. This year’s Premiere Artist Talk was devoted to Michael Rakowitz. Conversations was free and open to the public and attended by almost 3,000 people.

Visitors to Basel were offered a range of outstanding exhibitions by the city’s leading museums. Major exhibitions coinciding with Art Basel including VoltVOLTA’s homecoming to its original area in Basel, near the Voltaplatz, was a return to the values of what made the fair a substantial alternative to Art Basel and a link beyond Liste: quality and discovery from a spectrum of artists at a spectrum of entry-points. For the seasoned collector and nascent art-lover, there was much value to be found in the fair’s new home at Elsässerstrasse 215, as echoed by patron VIPs, veteran galleries, and newer colleagues alike. “On Monday morning we all had butterflies in our stomachs, but by day’s end it was clear that the move was overall a positive development,” stated VOLTA’s Artistic Director, Amanda Coulson. “It feels good to be back in a neighbourhood that we helped brand and will continue to have a hand in developing into the future.”

Here are some of the sales figures courtesy of Artnet

$3.9 million: Mark Bradford‘s You Must Have Fell and Hit Your Head (2001) at Mnuchin Gallery

In excess of $1 million: David Hockney’s The Big Hawthorn (2008) at Annely Juda

$650,000 each: Paintings by Robert Ryman from his 2008 series Large-small, thick-thin, light reflecting, light absorbing at Pace

$550,000: A painting by Per Kirkeby at Michael Werner Gallery

$100,000 each: Three paintings by Eddie Martinez at Mitchell-Innes & Nash

$86,000: A painting by Toby Ziegler at Galerie Max Hetzler

$19,000: A painting by Misheck Masamvu at Goodman Gallery

$1.5 million: A work by Carol Bove at David Zwirner

In excess of $1 million: Bruce Nauman’s Leaping Foxes (2018) sculptural work was purchased by the Emanuel Hoffmann Foundation via Sperone Westwater

$300,000: Teresita Fernández’s Untitled (Fence) 2018, bought by a member of the Phoenix Museum’s board, who has promised the piece to the museum, at Lehmann Maupin.

$180,000 each: Two sculptures by Yinka Shonibare MBE at Goodman Gallery

$35,000: A mirror work by Monica Bonvicini at Mitchell-Innes & Nash

$32,500: Mario Garcia Torres’s Who Said I Was All Nostalgia and No Fun? At Galleria Franco Noero

PHOTOGRAPHS, PRINTS, AND WORKS ON PAPER

$70,000: A photography work by Shirin Neshat at Goodman Gallery

$65,000 each: All works at the stand by Lenore Tawney at Alison Jacques Gallery

$36,000 each: Two of Mira Schendel’s untitled works on cardboard at Bergamin & Gomide