Art Below, the London based promoter/curators who are known for putting emerging art on the Underground, in the form of posters, has returned to New Orleans just in time for Mardi Gras. This Artlyst sponsored event is designed to give maximum exposure to a new lot of young artists, during the Big Easy’s busiest season.

Throughout the month of February, Art Below are displaying the work of 16 international artists on billboard space across New Orleans, Louisiana. February is an integral month for New Orleans as it is when the city hosts one of the biggest street carnivals in the world – the Mardi Gras – meaning ‘Fat Tuesday’, reflecting the tradition of the last day and night of eating, drinking and partying to the max  before everyone gives up their hedonist ways for 40 days and 40 nights

Ben Moore who curated the show says ‘I think the work that is on display in New Orleans this month resonates with the city in various ways – socially, politically, and culturally – Many of the artists who are displaying their work have some kind of connection with New Orleans, and if they don’t – well, they do now because their work is now present in the backdrop of the consciousness of the people and parades masquerading across the streets – I remember first going to New Orleans when I was 18 years old and having my palm read in the back streets of the French quarter – one piece of advice the old man had for me was ‘don’t stay awake longer than three days’ – When I returned in 2012 to do the first Art Below pop up in New Orleans during Mardi Gras I feared that might happen but I was surprised at how the Mardi Gras was wrapped up just after sunset and the street cleaning began! I was asleep by midnight!’ 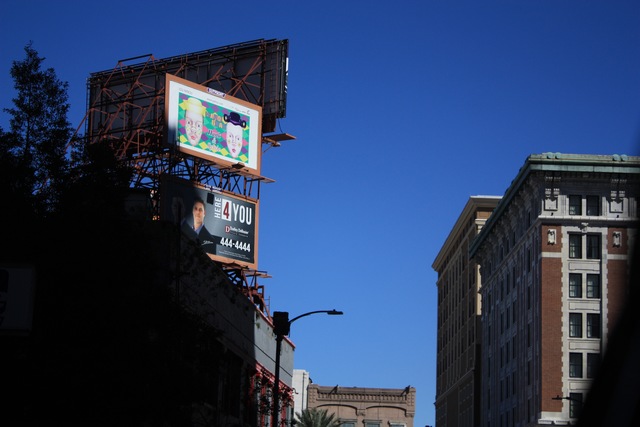 Lou Patrou an artist based in New York who has been drawing and painting faces since the 1960s talks about his experiences of New Orleans: ‘When I was last in New Orleans, (in the 1970s) it was a crazy place, it was dark and seedy like New York City was – lot’s of strippers, hookers and strip clubs all around. – we used to call them Sailor bars.’ 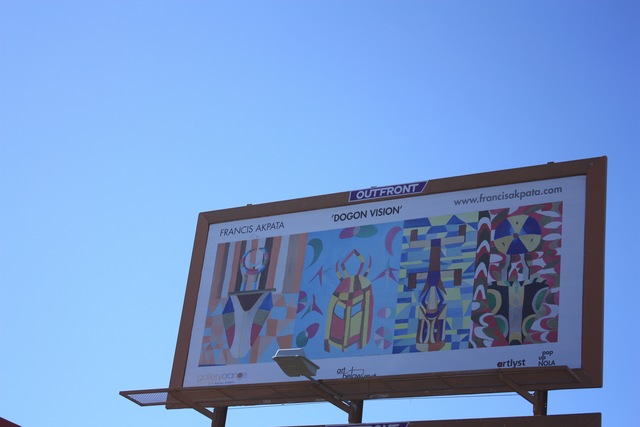 Much of the work on display resonates with the African culture that is forever present in the fabric of New Orleans society. For Francis Akpata a Nigerian artist based in London –  this will be the second time that he has exhibited in New Orleans with Art Below – His work ‘Dogon Vision’ is inspired from the patterns and fabrics of the Dogon tribe Mali, West Africa. 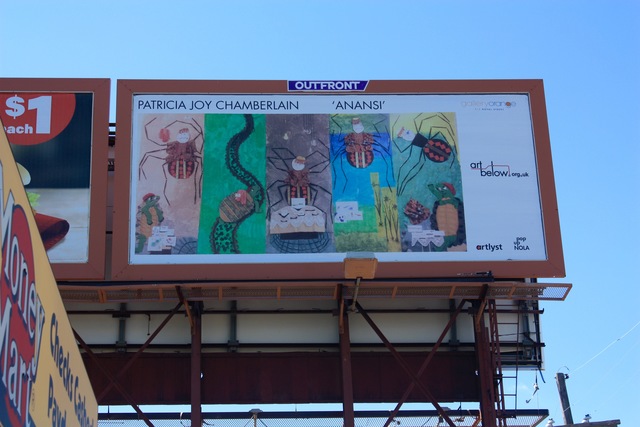 Coventry based artist Patricia Joy Chamberlain work titled ‘No Dinner for Anansi’ is baed on an African Myth – She worked with children aged between 2 and 4 to create this unique collage which measures 3 x 2 meters and is now viewable in the form of a billboard on the streets of New Orelans.

‘I take Mexican and Guatemalan folk art figures and masks and give them a new life in my pastel paintings. This ties directly to New Orleans and Mardi Gras because masks are an integral part of Mardi Gras culture.  During early Mardi Gras celebrations hundreds of years ago, masks were a way for their wearers to escape class constraints and social demands.  While wearing masks, carnival goers were free to be whomever they wanted to be and to mingle with any individual they wished.  My painting is called “Charade, ” which also alludes to hiding behind a false identity, just like those who don the Mardi Gras mask.   This is the first time I have done anything in this part of the country’ 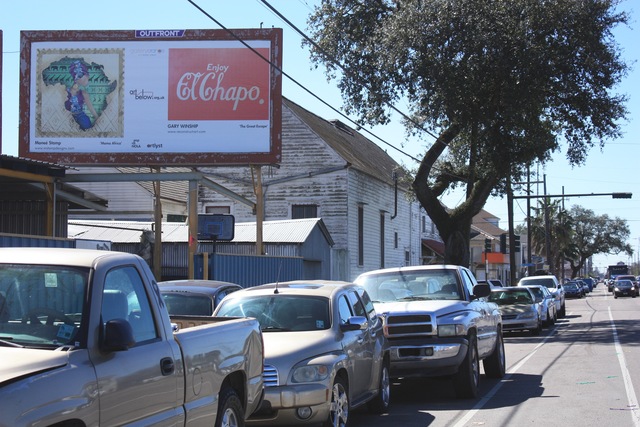 Monee Stamp ‘Mama Africa’ and Gary Winship ‘The Great Escape’ Location: North Broad Street. The work of Karen Thomas a french artist based in Montpellier and US artist Diana Whiley pay homage to  the vibrant music scene – the star feature of New Orleans – a legacy that is African-American at its core.

Ben Moore, on the placement of the billboards remarked; ‘When I plan where the different works are going to be positioned I try and find an interesting dialogue between the work and the space in which it will inhabit for example I postitioned ‘Cars and Stripes’ in the forecourt of a used car dealer.  I positioned Noah da Costa whose work is concerned with concrete buildings under the backdrop of the mid city skyscrapers whilst Sirenes (Norway)  and Lisa Cody Rapport (US) works well against the backdrop of the traditional New Orleans town house’

Running alongside the billboard display the artist’s work is also on show as framed giclee prints at Gallery Orange based on Royal Street in the heart of the french quarter. 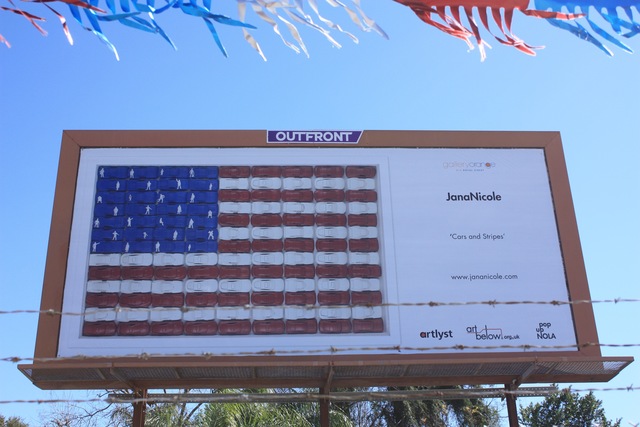