Art Night 2017 has announced their programme for London’s most atmospheric art event. The East End will again be transformed with free art, performance and music by some of the world’s leading artists for the night of Saturday 1 July 2017. Art Night was inspired by the international Nuit Blanche movement, first initiated in Paris in 2002. From Riga to Toronto, via Melbourne and Tokyo, this free-to-attend nocturnal celebration of arts in the city was staged in more than 30 cities worldwide and keeps expanding around the globe.

“For Art Night 2017, I wanted to explore the theme of ‘Fusion of Horizons’ – Fatoş Üstek

This year’s line-up includes Jake and Dinos Chapman animating a vacant warehouse at London Dock, guided meditation with Ian Whittlesea in the Bascule Chamber of Tower Bridge, and Melanie Manchot invites the public to join a mass dance class hosted in Exchange Square at Broadgate. Art Night 2017 is a collaboration with the Whitechapel Gallery and curated by independent curator and writer Fatoş Üstek. The festival is generously supported by international auction house Phillips.

Audiences for Art Night 2017 will be able to experience a trail of art, architecture, dance and music from the early evening until dawn. The artists include:

Charles Avery will show objects and elements from his fictional Island in locations across East London, ranging from installations in public areas of St Katharine Docks to the transformation of White Mulberries café into the bar of The Egg Eating Egret. 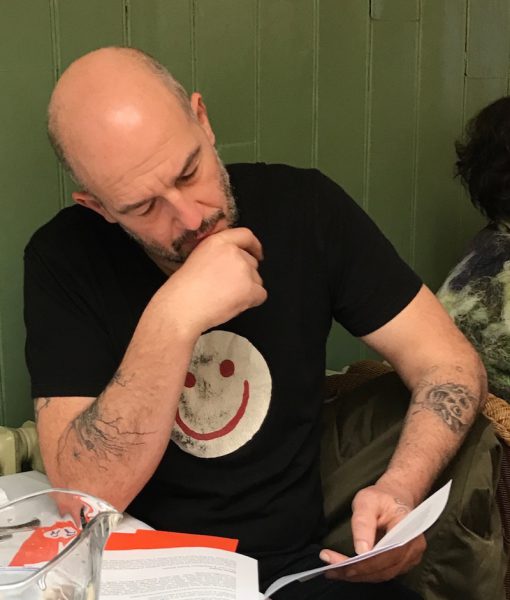 Jake Chapman at the press conference for Art Night 2017

Jake and Dinos Chapman will create a new video installation The Misshapeness of Things to Come in a listed warehouse at London Dock, accompanied by a live performance by Jake Chapman’s band. A selection of the Chapmans’ defaced prints will be inserted into the existing furnishings of Dennis Severs’ House, an 18th century candlelit Huguenot house.

Benedict Drew will work with experimental musicians for a durational performance with video and live music as part of his major multi-media installation at Whitechapel Gallery, housed in the art nouveau building designed by Charles Harrison Townsend in 1901.

Anne Hardy will create an immersive installation consisting of sound, sculpture and light in the former headquarters of the Nicholls & Clarke building, courtesy of British Land and an exclusively managed Location House site.

Melanie Manchot will present a new commission that invites audiences to take part in a mass dance performance at Exchange Square, Broadgate.

A Club Night at Village Underground will feature artist Carsten Nicolai a.k.a. Alva Noto and other DJs in collaboration with Boiler Room.

Lindsay Seers will present a video installation with performative elements in the ceremonial setting of the Grade-II listed Masonic Temple at Andaz London.

Korean artist Do Ho Suh will produce an installation for East London, composed of elements from his extensive practice.

Turkish artist Güneş Terkol will work with Middlesex Street Estate residents to create a new work for the windows of The Cass, London Metropolitan University, and a permanent mural for the Estate.

Ian Whittlesea will invite audiences to take part in an illuminated meditation inside Tower Bridge’s Bascule Chamber, inspiring them to see the world differently by descending into the depths of the Bridge.

Iwona Blazwick, Director of Whitechapel Gallery, said: “As an institution which prides itself on bringing great art to the people of East London for over a century, we are delighted to be working with Art Night, a festival which brings art and heritage to life for one special summer night. It is a project that enables us to engage even further with our diverse audiences and local heritage, and to offer artists the opportunity to create engaging works of art outside of the confines of the gallery walls. We are excited to invite everyone on a journey to rediscover the city out of hours and through art.

Fatoş Üstek, Curator, said: “For Art Night 2017, I wanted to explore the theme of ‘Fusion of Horizons’, inviting visitors to engage in multifarious dialogues whilst bringing their own aspirations and dreams. I have formulated the festival experience as a series of situations that are evocative of horizons that lie ahead, through which we see and understand the world around us. Fostered by the commissions, the festival celebrates the multiplicity that the East End holds, with its diverse architectural, societal, psychological and linguistic profile.”

A group of Art Night Guides will be present at each site, guiding audiences and answering questions about the works and sites. The Art Night Guides programme is supported by Art Fund, drawing on their Student National Art Pass network. Art Night is supported by public funding from the National Lottery through Arts Council England, with additional support provided by Bloomberg Philanthropies.

Fatoş Üstek is the curator of Art Night 2017 with the Whitechapel Gallery and Unlimited Productions. She is currently editing the fig-2 publication that commemorates the 50 projects in 50 weeks that she curated in 2015 at the Institute of Contemporary Arts, London. Formerly, Üstek acted as associate curator for the 10th Gwangju Biennial, South Korea. Other projects include an opera in five acts at DRAF, London; the Now Expanded exhibition trilogy that took place at Kunstfabrik, Berlin; Tent Rotterdam and DRAF, London. Üstek is chief-juror for the Celeste Prize 2017, as well as jury for the sculpture section at the 2017 Arte Laguna Art Prize, Venice. Üstek is founding member of Association of Women in the Arts (AWITA); on the Block Universe Advisory Board; member of AICA UK, and ICI Alumni, and part of the Curators Network. She contributes regularly to international art magazines, publications and exhibition catalogues.