London once again is gearing up for Art Night 2018 this Saturday 7 July from 6 pm to 6 am. Art Night is London’s largest free contemporary arts festival. Each year the festival partners with a leading cultural institution and curator, focusing on a different area of London to explore its distinctive identity, culture and architecture through various forms of art.

This year, Art Night heads south of the river for the first time

The 2018 trail will transform the Thames riverbank between the South Bank and Battersea Power Station, via Vauxhall and Nine Elms, taking place in iconic and off-the-beaten-track venues. Ralph Rugoff and the Hayward Gallery team have curated projects by 12 internationally renowned artists to coincide with the institution’s 50th anniversary.

Presented alongside these 12 projects, the Art Night Open programme offers local galleries, organisations, independent artists and curators the opportunity to take part in the festival responding to the 2018 curatorial themes and cultural trail. 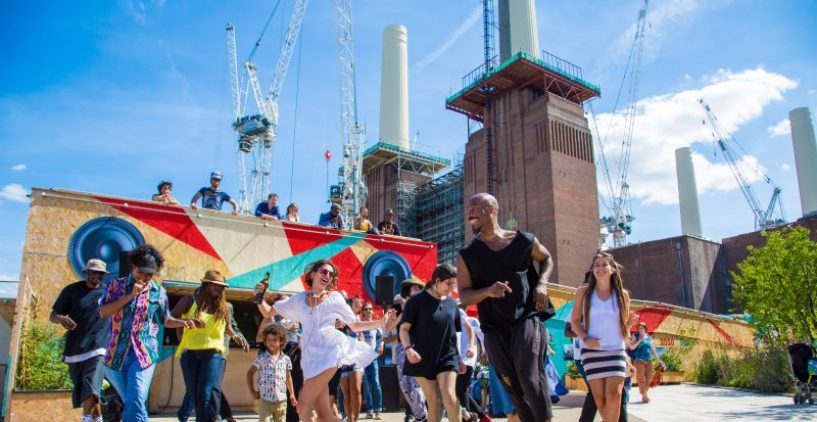 Ralph Rugoff, Hayward Gallery Director, said:
“Building on the success of the previous iterations of this all-night festival as well as the Hayward Gallery’s own history of presenting ambitious off-site projects by contemporary artists, Art Night 2018 should light up the night with some very adventurous art.”

Artworks will be sited across a dozen exceptional and historic sites along the trail, from cultural landmarks such as the Hayward Gallery and the Garden Museum, to more unusual spaces including New Covent Garden Market, the British Interplanetary Society, Embassy Gardens, and the iconic Battersea Power Station. A group of Art Night Guides, supported by Art Fund, will be on hand across the trail to guide visitors throughout the night, with a dedicated MBNA Thames Clippers boat running a bespoke route until 4am.

Hayward Gallery Director Ralph Rugoff and the curatorial team have taken their cue from the immediate context of the local area, to ask questions about the emotional and political associations of ‘home’, including residency, refuge and security; and even the quest to create habitats on other planets. This edition of Art Night also explores the rich history of gardening and urban produce in the area between the South Bank and Battersea Power Station, which continues to supply vegetables, fruit and flowers to the whole of London through New Covent Garden Market, and contains the oldest continually cultivated gardens in the city. 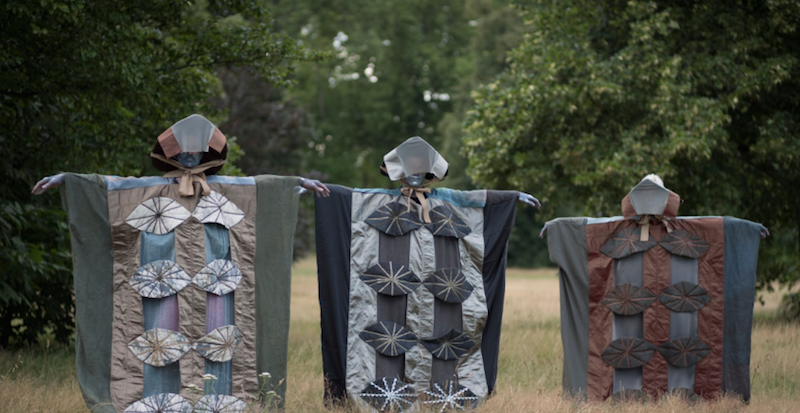 The 2018 programme comprises new commissions by artists including Jeremy Deller (b. 1966, UK) who will be presenting a new performance in a second collaboration with the Melodians Steel Orchestra; Tamara Henderson (b. 1982, Canada), inspired by the taxonomies of plants and their diverse geographies and climatic conditions, will respond to the New Covent Garden Market with a ‘Floral Ensemble’ musical performance; and a public procession and performance by Marinella Senatore (b. 1977, Italy) for thousands of people to take part in along the Art Night trail.

Further highlights of the programme curated by the Hayward Gallery team include:
● Dwelling (2014), a single-channel video work by Yuan Goang-Ming (b.1965, Taiwan), in which a comfortably furnished living room explodes in slow motion, projected outdoors at Hayward Gallery.
• Suzanne Treister (b.1958, London) will transform the area surrounding Battersea Power Station with a new site-specific commission, consisting of an 80 meter long mural, wrapped along the riverfront hoardings at Circus West
Village. Incorporating watercolours from herSURVIVOR (F) project (2016-ongoing), the mural will combine these with images of the power station’s iconic chimneys.
● Halil Altindere (b. 1971, Turkey) will present Space Refugee at the British Interplanetary Society in Vauxhall, a multimedia installation focusing on Muhammed Ahmed Faris, the first Syrian Cosmonaut in space, now a refugee in Turkey.
● Prem Sahib (b.1982, UK) will install a maze-like structure in a public space in Vauxhall based on the footprint of a contemporary one-bedroom apartment, and evocative of the local club scene. 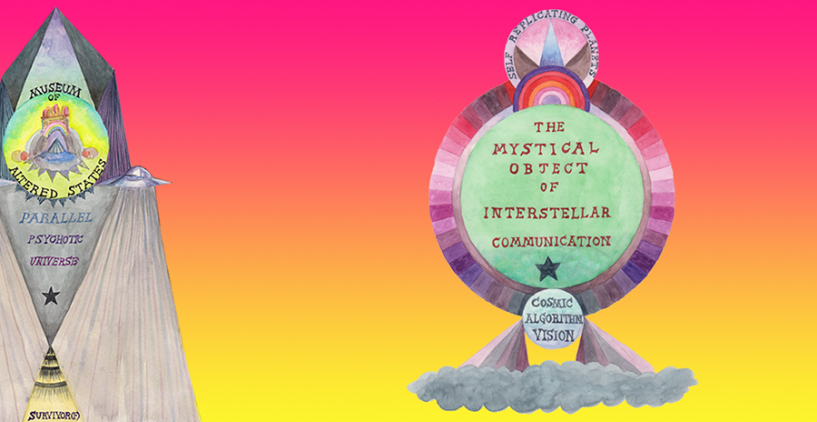 ● An event hosted by artist and activist Liv Wynter (b.1992, UK), at the nave of the newly reopened Garden Museum, with a series of live performances including poetry, rap, music and dance, touching on themes of politics and class, activism and labour, sexuality and gender.
● Cécile B. Evans (b. 1983, USA) will stage the production of the final episode of her three-part video and installation work titled Amos’ World – constructing a TV set at Spectrecom Studios for audiences to take part in a live taping session with set pieces, chroma blue screen, and live performers.
● Lara Favaretto (b. 1973, Italy) will present her installation I poveri sono matti (2005-8) for the final time, before burning the work in private. The work – a red and blue gypsy caravan emitting a recording of the popular World War II-era polka, Rosamunde – will be suspended from a crane.
● Previously shown at the 15th Istanbul Biennial, Life Track (2015) is a video installation presented by Vajiko Chachkhiani (b. 1985, Georgia) in a public space along the Art Night 2018 trail.
● In the Embassy Gardens Marketing Suite, Miao Ying (b. 1985, China) will be presenting a virtual reality (VR) project defying the laws of gravity and inviting the audience for a session of ‘lifestyle hypnotism’.

Presented alongside these 12 special artist projects curated by Hayward Gallery’s Director Ralph Rugoff and the Exhibitions team, the Art Night Open programme offers local galleries, organisations, independent artists and curators the opportunity to take part in the festival, responding to the 2018 curatorial themes and cultural trail.
Over 50 cultural institutions and local venues will be included in this year’s Art Night Open programme, activating the 2018 trail with contemporary art – ranging from immersive multimedia installations and interactive experiences to screenings, performances and experimental music. Continuing along the curatorial themes, of ‘home’ and ‘urban landscape’, as outlined by the Hayward Gallery’s Exhibitions team, Art Night Open projects will take place in both unusual and compelling venues and outdoor spaces throughout the trail. 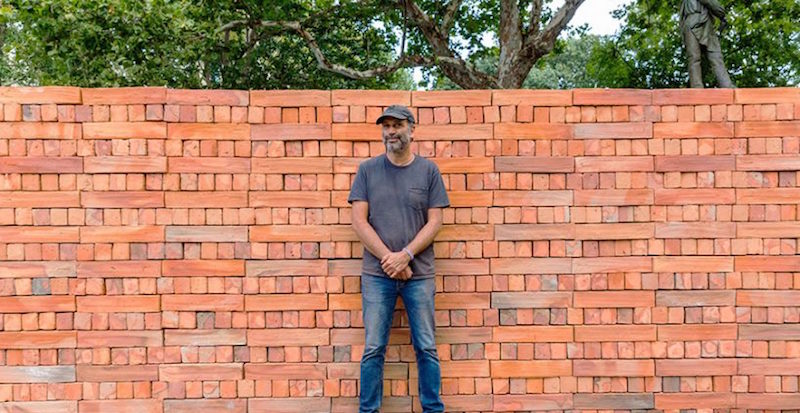 Highlights of the Art Night Open programme include the UK premiere of Mexican artist Bosco Sodi’s (b. 1970, Mexico City) performative installation Muro (2018), a 2 meter high by 8 meter long wall consisting of 1600 clay bricks built by the artist in the riverside square of the National Theatre on the South Bank. Once installed, passers-by will be invited to dismantle the wall brick-by-brick throughout the night, taking part of the artwork home. Further down the trail, Future\Pace Art Group Random International will be unveiling a permanent outdoor commission titled Self and Other (for Albert Embankment) (2018) in the Albert Embankment Plaza at St James’ Merano Residences, which will be activated throughout the night by dance performances by Studio Wayne McGregor.
In a new collaboration to celebrate the festival’s third edition, Art Night and DRAF (David Roberts Art Foundation) present an evening of video screenings at Battersea Power Station’s Village Hall from 6.00 – 11.00pm. Art Night x DRAF includes works by artists Neïl Beloufa, Cyprien Gaillard, Lars Laumann, Nicolas Provost, David Shrigley and Frances Young. The event will be followed by a Club Night in collaboration with Lisson Gallery (open to 4am); featuring a special screening of Hans Berg and Nathalie Djurberg’s Waterfall Variations and music sets by artists Hans Berg and Haroon Mirza.
Featured spaces activated by Art Night Open will include: the British Film Institute (BFI); the National Theatre’s riverside square on the South Bank; London’s historic Vauxhall Pleasure Gardens; the member’s room of the Kia Oval Cricket Ground; the facade and rooftop of New Covent Garden Market; Battersea Power Station and its Village Hall, located in a former railway arch at Circus West Village; the King George V room at the London Marriott Hotel County Hall; the Bargehouse at Oxo Tower Wharf; and Waterloo’s Leake Street Tunnel.
Local arts organisations including Beaconsfield Gallery; Gasworks; Morley College; Newport Street Gallery; Pump House Gallery; Studio RCA; and Sunday Painter will be participating in the festival with late-night exhibition openings, UK premieres and special live performances. 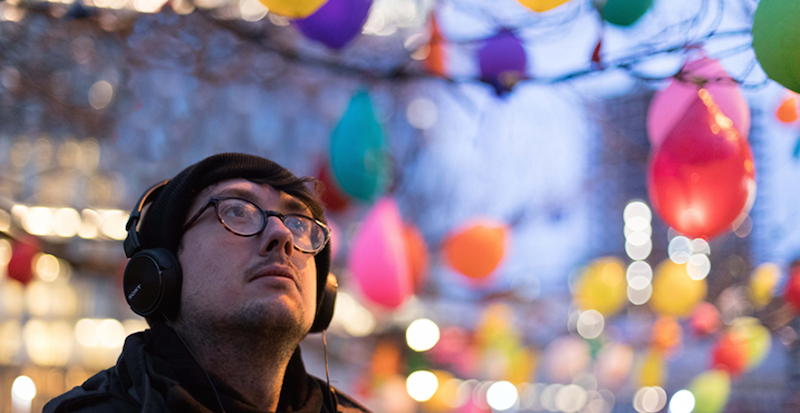 Further highlights of the Art Night 2018 Open programme include:

● Selected artists showreels will be screened throughout the night at the British Film Institute (BFI). Exploring the themes of ongoing struggles in the artistic pursuit, curator Louise Chignac will present works by Pierre Huyghe and Laure Prouvost amongst others, while Daata Editions’ Queertopia curated by Gemma Rolls-Bentley will review the existence of queer communities and their spaces
● Zabludowicz Collection will present a collaborative audio-visual performance by artists Peter Burr and Oliver Coates creating a new immersve environment at Aures London in Leake Street
● London-based artist Evan Ifekoya will present their first solo exhibition in London at Gasworks with a special performance for Art Night: a live collaborative sound work with Hannah Catherine Jones, envisaged as a time capsule for the post- apocalyptic future
● Newport Street Gallery extends its opening hours until midnight, exhibiting work by Helen Beard, Sadie Laska and Boo Saville, and will host a special DJ set at the gallery’s in-house restaurant Pharmacy 2, with Boo Saville playing music selected by the exhibiting artists. The restaurant has a bespoke Art Night menu created by Mark Hix
● A new site-specific interactive performance by artist duo Sarah Cockings and Harriet Fleuriot will transform the reception area of Nine Elms Point, a development by Barratt London
● Larry Achiampong will present a new performance and installation at StudioRCA Riverlight, responding to the theme of ‘otherness’ – developing a landscape fused with references to science fiction, video games, and future narratives
● Anna Skladmann will exhibit a site-specific installation on the building front of the New Covent Garden Market raising questions on botanical classification systems; exploring notions of nature and society, cultivation and the machine using specimens sourced from the market
● As part of the programme curated for Art Night by Pump House Gallery in Battersea Park, Adam Christensen will showcase a new performance in response to Nicolas Deshayes’ site-specific sculptural installation, engaging
with Deshayes’ use of bodily form and urban infrastructure
● Grad will launch ShadowMemory, a new digital art project inviting audiences to explore the surrounding urban areas through an app – with a diverse collection of digital narratives, created by artists including Timothy Maxymenko, Katia Reshetnikova and eeefff, unfolding as the user follows the routes on foot along the Art Night trail.

Download the Visit London app to plan your night and have all the Art Night 2018 projects in your pocket.

Please view a map to plan your night Here

Art Night 2018 Families and anyone not up for an all-nighter can also see a selection of work during daytime hours, with several sites and venues re-opening on Sunday from 11am–6pm.