Art Night 2017 is one of the UK’s largest free arts festivals. It is sponsored by Phillips and supported by the Whitechapel Gallery allowing anyone with a spirit of adventure to take a magical mystery tour to the edgier side of the London art scene. London’s East End is transformed with art, performance, and music by some of the world’s leading artists. From tonight at 6:00 pm (Saturday 1 July 2017 until 4 am). The festival is curated by Fatoş Üstek.

“For one special night this summer, I am excited to invite you to explore our neighbourhood out of hours and through art” – Iwona Blazwick, Director, Whitechapel Gallery

Art Night was inspired by the international Nuit Blanche movement, first initiated in Paris in 2002. For one night only, internationally acclaimed artists have transformed unusual spaces across east London, from historic and iconic sites to secret locations and public areas.
The highlights include Jake and Dinos Chapman animating a vacant warehouse at London Dock, Ian Whittlesea leading guided meditation sessions in the Bascule Chamber of Tower Bridge, Melanie Manchot inviting the public to join a mass dance performance in Exchange Square, a new installation by Lindsay Seers in a hidden Masonic Temple next to Liverpool Street, and a one-off performance by Benedict Drew with a group of leading experimental musicians at Whitechapel Gallery. 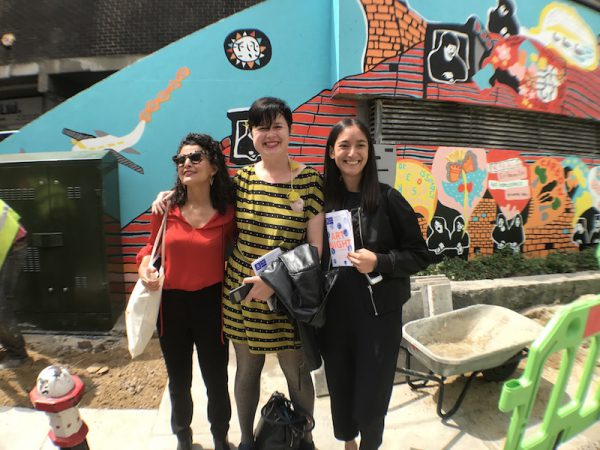 The curators and organisers Art Night 2017

With cultural venues, galleries and local businesses joining the Associate Programme, there are 60 additional events taking place on the night throughout the East End, making Art Night one of the largest free art festivals in the UK.
Highlights of the Associate Programme include Thomas More Square being transformed into an immersive utopian garden by Estela Oliva, a night of film screenings with Frieze Magazine at the new Curzon Aldgate cinema, a political poster campaign and workshop at Ace Hotel London called Time for Outrage!, an interactive installation by Candida Powell-Williams at Devonshire Square, and new virtual reality works by artists Christian Lemmerz and Paul McCarthy presented by Khora Contemporary at creative workspace Second Home – with music and cocktails until midnight.
The programme draws inspirations from the East End’s rich history and the cosmopolitan and creative environments of today. Many of the festival’s commissions are site-specific works, which respond directly to the area’s fascinating buildings and locations.
Charles Avery is showing objects and characters from his fictional Island across east London; from sculptures, performers, and a flyposting campaign, to the transformation of White Mulberries café at St. Katharine Docks into the bar of The Egg Eating Egret – serving free egg cocktails to visitors. 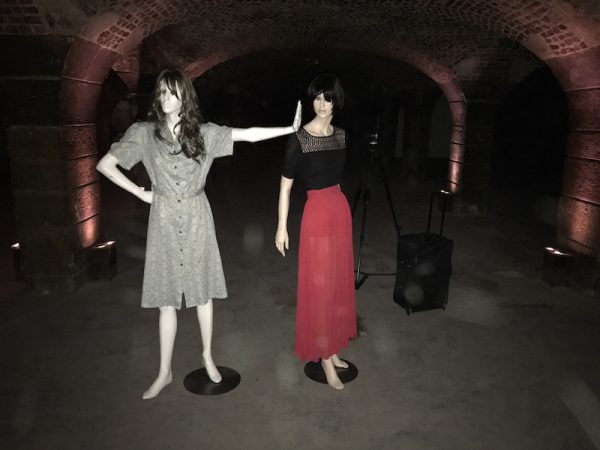 Jake and Dinos Chapman have created a new video installation The Misshapeness of Things to Come in a listed warehouse at London Dock, accompanied by a live performance by Jake Chapman and his band. A selection of the Chapmans’ defaced prints has been inserted into Dennis Severs’ House, an 18th century candlelit Huguenot house.
Benedict Drew is working with experimental musicians for a durational performance with video and live music as part of his major multi-media installation at Whitechapel Gallery. 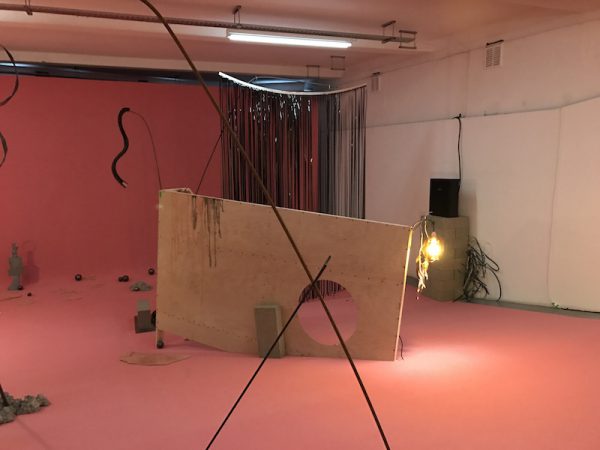 Anne Hardy has created an immersive installation consisting of sound, sculpture, and light in the former headquarters of the Nicholls & Clarke building, courtesy of British Land, and an exclusively managed Location House site. 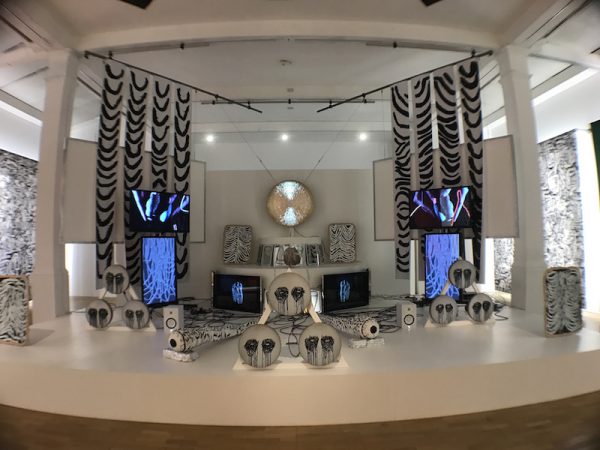 For The White Chapel Building, a recently reinvented office space, Lawrence Lek is presenting a virtual reality installation exploring the utopian potential of future workspaces.
Melanie Manchot is inviting audiences to take part in a collective dance performance at Exchange Square, Broadgate, in collaboration with 10 dance schools from around the East End, each representing a different style, from Flamenco to Irish Dance and Argentine Tango.
A club night at Village Underground features artist Carsten Nicolai a.k.a. Alva Noto and other DJs in collaboration with Boiler Room. 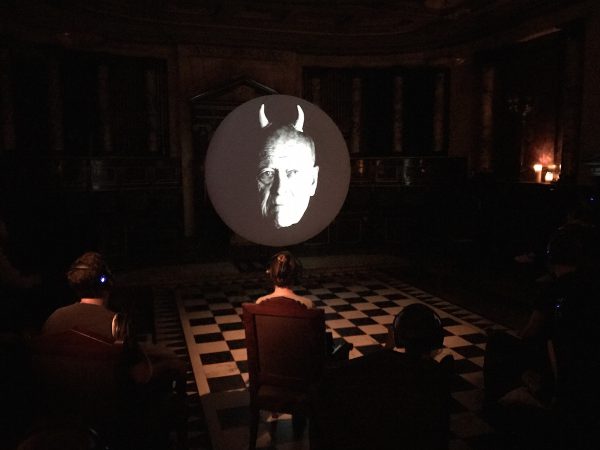 New video installation by Lindsay Seers and unannounced performances are taking over the ceremonial setting of the Grade-II listed Masonic Temple at Andaz London.

Korean artist Do Ho Suh is presenting a video installation that responds to the architecture of Christ Church, Spitalfields. 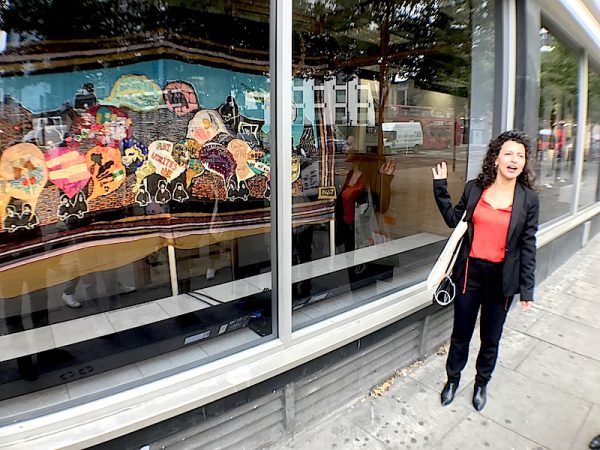 Turkish artist Güneş Terkol has worked with Middlesex Street Estate residents to create a new work exhibited in the windows of The Cass, London Metropolitan University, and a permanent mural for the Estate. 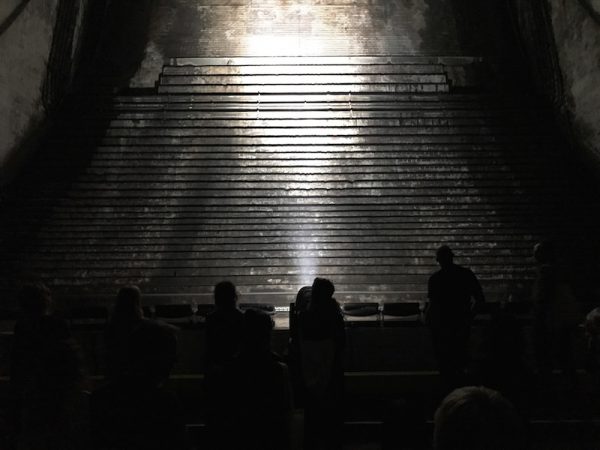 Ian Whittlesea is inviting audiences to take part in an illuminated meditation inside Tower Bridge’s Bascule Chamber, inspiring them to see the world differently.
A group of Art Night Guides will be present at each site, guiding audiences and answering questions about the works and sites. The Art Night Guides programme is supported by Art Fund, drawing on their Student National Art Pass network.
Art Night is supported by public funding from the National Lottery through Arts Council England, with additional support provided by Bloomberg Philanthropies.
Justine Simons, Deputy Mayor for Culture and the Creative Industries, said: “Art Night 2017 is a great way to explore east London at night. These free art installations by internationally renowned artists celebrate the dynamic creativity of the East End. I encourage locals and visitors to embrace the streets as their own and discover a new side to our city. There’s no doubt that this exciting festival contributes to the capital’s reputation as an international powerhouse for culture, and shows that London is open to creativity, talent and ideas from around the world.”
Iwona Blazwick, Director, Whitechapel Gallery, said: “For one special night this summer, I am excited to invite you to explore our neighbourhood out of hours and through art. For over a century, the Whitechapel Gallery has prided itself on bringing great art to the people of east London and beyond. We are delighted to be working with Art Night, and to be extending our programme outside the Gallery walls into unusual spaces.”
Cheyenne Westphal, Chairman, Phillips, said: “Art Night is well on its way to becoming an established part of the contemporary art calendar in London, underscoring the city’s position as the creative capital of Europe and giving Londoners the chance to see and experience facets of their city in a new light. As part of the contemporary art ecosystem in London and Europe, Phillips is thrilled to be the main sponsor of Art Night for the second year. We are committed to supporting contemporary arts and culture in the UK capital and beyond through our global programme of arts partnerships.”

Art Night is a new annual contemporary arts festival that transforms London for one unforgettable night, presenting acclaimed international art in unusual locations across the city. Each year a leading cultural institution and a curator working in a different part of London for the festival, exploring the area’s history, culture, and architecture. The first edition took place on Saturday 2 July 2016 and was guest-curated by the Institute of Contemporary Arts (ICA) with curator Kathy Noble. Art Night was inspired by the international Nuit Blanche movement, first initiated in Paris in 2002. From Riga to Toronto, via Melbourne and Tokyo, this free-to-attend nocturnal celebration of arts and the city was staged in more than 30 cities worldwide and keeps expanding around the globe.

Art Night was founded by Unlimited Productions – a collective of young cultural entrepreneurs from all around Europe, who decided to join forces to share their passion for art and London with the public. Unlimited produces projects that explore the relationship between arts and urbanism, working with curators and artists to create accessible cultural experiences. Unlimited launched Urban Tales in 2015, a series of events introducing the concept of Art Night. The first chapter, The Bank, invited the public to explore an empty 1920’s bank in the heart of the City of London. For Urban Tales 2, Unlimited took over London’s only lighthouse to showcase a site-specific contemporary opera. Art Night 2017 is presented in collaboration with Whitechapel Gallery whose curators include Lydia Yee, Chief Curator and Emily Butler, Mahera and Mohammad Abu Ghazaleh Curator.

For over a century the Whitechapel Gallery has premiered world-class artists from modern masters such as Pablo Picasso, Jackson Pollock, Mark Rothko and Frida Kahlo to contemporaries such as Sophie Calle, Lucian Freud, Gilbert & George and Mark Wallinger. With beautiful galleries, exhibitions, artist commissions, collection displays, historic archives, education resources, inspiring art courses, café/bar and bookshop, the Gallery is open all year round, so there is always something free to see. The Gallery is a touchstone for contemporary art internationally, plays a central role in London’s cultural landscape and is pivotal to the continued growth of East London and one of the world’s most vibrant contemporary art quarters.

Fatoş Üstek is the curator of Art Night 2017 with the Whitechapel Gallery and Unlimited Productions. She is currently editing the fig-2 publication that commemorates the 50 projects in 50 weeks that she curated in 2015 at the Institute of Contemporary Arts, London. Formerly, Üstek acted as associate curator for the 10th Gwangju Biennial, South Korea. Other projects include an opera in five acts at DRAF, London; the Now Expanded exhibition trilogy that took place at Kunstfabrik, Berlin; Tent Rotterdam and DRAF, London. Üstek is chief-juror for the Celeste Prize 2017, as well as jury for the sculpture section at the 2017 Arte Laguna Art Prize, Venice. Üstek is founding member of Association of Women in the Arts (AWITA); on the Block Universe Advisory Board; member of AICA UK, and ICI Alumni, and part of the Curators Network. She contributes regularly to international art magazines, publications and exhibition catalogues. www.fatosustek.com | Twitter: @FatosUstek

10-11pm Jake Chapman and his band Funhole at London Dock

All events are free and open to all, except the Club Night at Village Underground.

For a complete line-up and more Information see www.artnight.london