Several artists have pulled their work from the current group exhibition at the Design Museum in Kensington, London. The move was in protest to the Museum allowing arms dealers to host an event at the space, the former home of the Commonwealth Institute.

The group were joined by representatives of movements in Syria, Hong Kong and Bahrain who have been repressed using UK-manufactured weapons. They verified that their work has indeed been removed, collected it and ensure the statement they have asked for has been put in its place.

The Design Museum has not ruled out working with the arms, tobacco and fossil fuel industries in the future

Around a dozen artists attended, including Peter Kennard, Tim Fishlock (Oddly Head), This Ain’t Rock’n’Roll, the Space Hijackers, Keep it Complex Make it Clear, Occupy Design Collective, Bristol Streetwear, the Craftivists Collective, Dr D and BP or not BP? Many others gave permission for their work to be collected too.

The Hope to Nope exhibition, which runs until 12th August 2018, explores “how graphic design and technology have played a pivotal role in dictating and reacting to the major political moments of our times.”

The unprecedented move by artists follows revelations that on Tuesday 17th July the museum hosted an arms industry event, timed to coincide with the Farnborough International arms fair. The event was organised by Leonardo, which is estimated to be the world’s ninth largest arms company. Leonardo has armed human rights-abusing regimes around the world, including Saudi Arabia, Turkey and the Philippines. 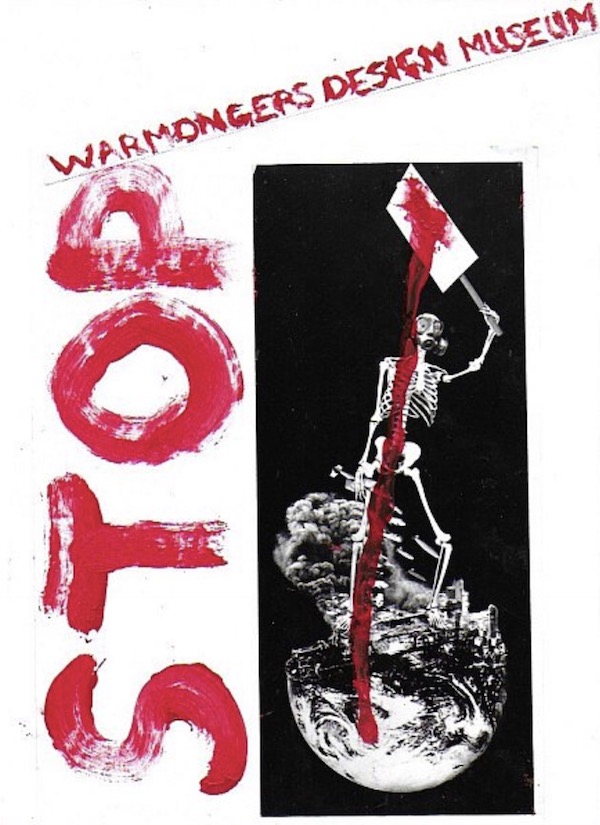 The group of over 40 artists have come together as the Nope to Arms Collective and are responsible for a third of the art on display in Hope to Nope. The artists first demanded that their work is removed in a public letter to the museum on 25 July. They include highly-respected designers Shepard Fairey, Milton Glaser and Jonathan Barnbrook.

The museum responded by announcing they were reviewing their due diligence policies and committing ‘not to have any arms, fossil fuels and tobacco corporate hires in the museum for the period of time during which we undertake our review’.

The artists responded on Monday that this move does not go nearly far enough, and told the museum: “As museum directors, you have the authority to decide immediately that arms, fossil fuels and tobacco companies are not appropriate sources of funds for the museum. It should be clear without needing a policy review that the core products and business practices of these industries are inextricably linked to death and destruction, which is why they are widely acknowledged to be unacceptable partners for cultural institutions. By being on your walls in the context of the Leonardo event, our work takes on a new meaning: of complicity in the arms trade. This is completely unacceptable to us.”

The artists requested that the museum remove their work by August 1st and display a specific explanatory statement in its place.

Malu Halasa, who loaned work from the anonymous Syrian poster collective Alshaab Alsori Aref Tarekh (‘The Syrian People Know Their Way’), said: “I gave high-resolution files of Syrian posters to the exhibition in good faith. I had no idea that the museum would be entertaining arms dealers while showing an exhibition of resistance posters and art. For me and the artists I represent this is akin to serving cocktails on the corpses of the over 400,000 people who have died in the over eight-year-long conflict.”

In response, the Design Museum has agreed to remove the artists’ work, but has not yet acknowledged that there was anything problematic with hosting an event for the arms industry.

The artist Dread Scott, whose flag in support of Black Lives Matter appears in the exhibition, explained this clearly in a message to the museum: “To host an arms manufacturer while you had an exhibition that includes projects that explicitly oppose the current political direction of the world—a world where rising fascism and nationalism are leading to increasing war and threats of war—was truly shocking. It should have been an ethical red line that the Design Museum should not have crossed. If the EDL or BNP wanted to hire your facilities I hope and assume that you would reject that. Weapons dealers should be pariahs and have no business being welcomed into cultural spaces.”

The Design Museum has not ruled out working with the arms, tobacco and fossil fuel industries in the future, claiming that Charity Commission rules prevent them from making ethical funding decisions of this kind. In fact, the opposite is true and the Charity Commission and Institute of Fundraising recommend that charities ensure that their funding sources are in line with their mission and values, and encourage charities to put ethical funding policies in place.

The museum has also accused the collective – which includes pro-democracy activists from Syria and Hong Kong – of curtailing free speech by removing their own work from the exhibition. In response, Stephanie Turner, Kiran Chahal and Nii Sackey, co-designers of the Grenfell Wall of Truth, told the museum: “By removing our work we are not censoring the exhibition. We are instead actively celebrating its concept and highlighting the power of protest. Our act of removing our work from an organisation that is currently at odds with our core values highlights that we embody the exhibition and the concepts within it.”

Andrew Smith of Campaign Against Arms Trade said: “By hosting arms companies the Design Museum was giving moral and practical support to an industry that fuels war and conflict. The anger of the artists is reflective of the widespread contempt that people have for the arms trade. It’s time for the Design Museum to live up to its ethics and put human rights ahead of profits.”