The Turner Prize winning art collective Assemble: are offered a major new survey of their work at the Architekturzentrum in Vienna. The architecture of Assemble is a unique combination of social activation with poetic spaces, and environmental with economic sustainability. The way we build and the relationships between how things are made and how materials are assembled is a reflection of a society’s social, economic and political situation — as Assemble acknowledge. Their projects are prototypes for different ways societies can build.

“Assemble brought the Turner Prize to the people’s living room.”

Even their debut project The Cineroleum, a temporary cinema erected by the collective at a disused petrol station, attracted widespread attention. Shortly after the completion of their various studies at Cambridge University, The Cineroleum marked the founding of Assemble in 2010 with its current constellation of 18 members. Not long after they created Yardhouse, also self-built, as affordable studio space and a cultural landmark in East London, as well as the Blackhorse Workshop, another of several social initiatives in their early career. For the Granby Four Streets project, they are working with a local neighbourhood initiative, a Community Land Trust, on the architectural, social, and economic reclaiming of an area of Victorian terraces in Liverpool. The Granby Workshop developed as part of this project and has, in the meantime, become a local community-led business. Handmade tiles, door handles, lamps or mantelpieces made of recycled materials were originally produced for the renovation of derelict Victorian terraced housing and are now being sold nationwide. The Granby Four Streets project brought Assemble the coveted Turner Prize while also bringing home an important accolade to a working class district of Liverpool. One resident described it like this: “Assemble brought the Turner Prize to the people’s living room.” 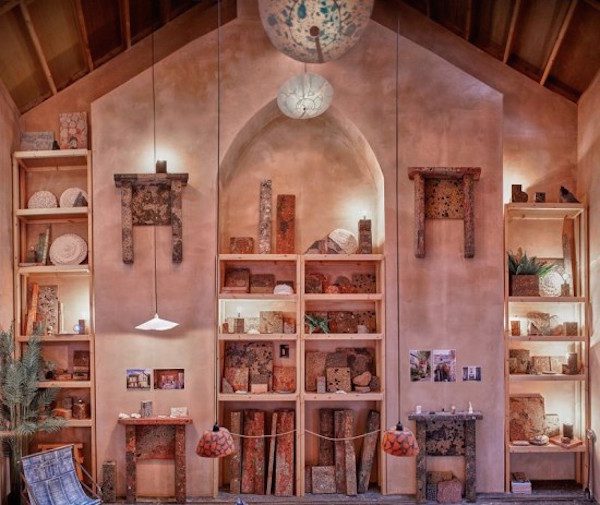 Assemble have not only experimented with surprising and always low-cost materials in the Granby Workshop. For the music venue and rehearsal space OTOProjects, demolition rubble found on the site was filled into rice sacks used, with the musicians themselves, to build supporting walls with excellent intrinsic acoustic properties. In their current project, an art gallery at Goldsmith College in London, mundane corrugated fibre cement boards provide a previously unknown glamour factor.
Assemble have set as their goal the reclamation of a strong proactive capacity for the architecture and for the users. A feeling of growing helplessness has spread among architects in recent years: the building industrial complex appears to have become too powerful, the pressure to keep costs down too great and the system too overregulated. With their expressive and yet pragmatic optimism, Assemble works on a shift from investor-led to user-driven architecture and urban development. What, for example, would architecture look like planned with the participation of children? As the medium of language proved unsatisfactory for their participatory role, six to twelve year-olds became the builders of their own Baltic Street Adventure Playground. “Better a broken bone than a broken spirit” is the motto of the playground by Assemble, which kids can continue building on a daily basis.
“The city often feels fixed, and overpowering, but it is really a pliant, mobile and temporary arrangement, a place which not only has been very different from how it is now, but soon will be very different again. Understanding this is a key part of realizing our own power in relation to the world around us, and our collective capacity to improve, change and extend the conditions of our day-to-day lives.“ Assemble, 2016
In the exhibition at the Architekturzentrum Wien, Assemble made ten of their realised “prototypes” as large scale installations conveying a three-dimensional tactile experience. Videos, sketches and drawings, and other documentation show the interactive communal processes where the materials come together. Samples of the materials add a further tactile dimension to the exhibition. The projects on show are covered in a special issue of the Az W journal Hintergrund, providing a deeper insight into the work of Assemble.
What can Vienna learn from Assemble? To find out, a visiting professor’s post has been established for them at Vienna University of Technology. Intense architectural research on the city’s historical raw material provided a focus, for the Winter Semester, on the brick and its social, economic and environmental contexts. For the Summer Semester students are forming a self-build collective. How could Vienna build? They are erecting an experimental brick and loam pavilion in the Az W courtyard parallel to the opening of the exhibition. It is envisaged as a public workshop and an alluring meeting place for chatting and exchanging thoughts over the summer months.
Projects by Assemble in the exhibition: Cineroleum (London, 2010), Sugarhouse Studios (London, 2012–), Baltic Street Adventure Playground (Glasgow, 2013), OTOProjects (London, 2013),Yardhouse (London, 2014), Blackhorse Workshop (London, 2014), Granby Four Streets (Liverpool, 2014–), Granby Workshop (Liverpool, 2015–), Granby Wintergarden (Liverpool, 2016–), Goldsmiths Art Gallery (London, 2014–)
Assemble. Wie wir bauen Veranstaltungsort: Architekturzentrum Wien – Alte Halle Ausstellung: 1. Juni 2017 – 11. September 2017