The new over-life size statue group of Princess Diana, just unveiled at Kensington Palace, to celebrate what would have been her sixtieth birthday, shows the late princess surrounded by three children. None of them are hers. One is male and Black; another is female and barefoot. The message of universal love is plonkingly obvious. The group offers yet another example of the current banality of new public sculptures. It is the work of Ian Rank-Broadley, who has previously made images of four generations of the House of Windsor, and who has also made postage-stamp designs depicting the Queen. One might therefore be tempted to think of it as the product of royal conservatism, out of step with the way things are today. The members of the House of Windsor are much better known for their passion for gee-gees than they are for their interest in contemporary art. 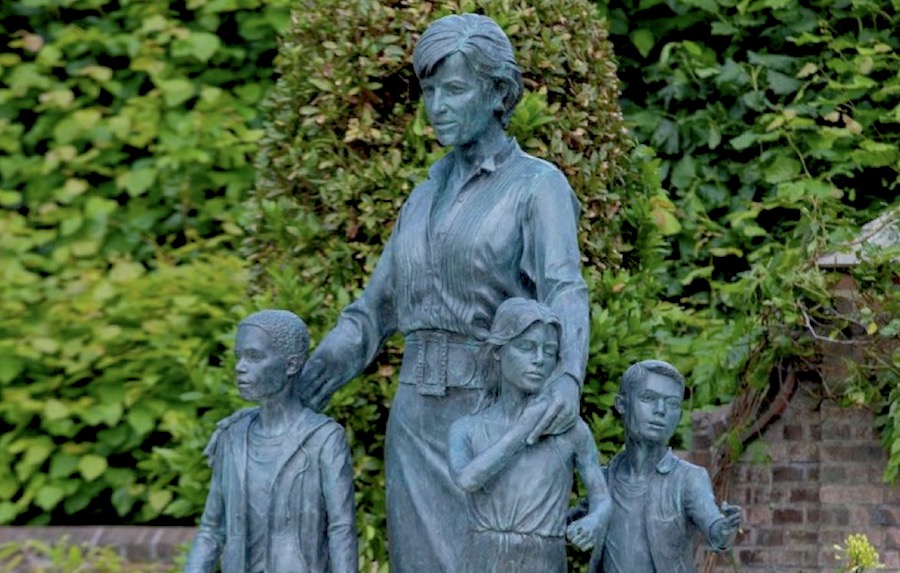 Statue Of Diana Princess Of Wales by Ian Rank-Broadley

If one looks a bit further, however, at other public sculptures, often made by artists who are much more regularly in the public eye and who are embraced by the promoters of new art, the banality of the message offered is very much the same. Take, for example, the recent sculpture by the leading YBA Gillian Wearing, which depicts the suffragette Millicent Fawcett (1847-1929) see top photo. There she stands, with an accusing look on her face, outside the Houses of Parliament. She is holding out a banner which says, in extra-large capital letters: COURAGE CALLS TO COURAGE EVERYWHERE. Waring’s recent self-portrait (2018) of herself, bearded and disguised as Durer, is a lot more amusing.

I’m sure Boris Johnson if he happens to be passing by, is grateful for the reminder offered, although Fawcett doesn’t look like the kind of girl he usually fancies. He is, after all, gambling with Covid right now.

Another, and weirder example, is Maggi Hambling’s statue of a semi-naked Mary Wollstonecraft, the ‘Mother of Feminism’, recently unveiled at Newington Green in Islington. The style of the figure, like that in the two other sculptures I have just described, is impeccably naturalistic. Still, the lady is rebelliously flashing her genitals – a gesture that seems a little tame, however, if you happen to know Marcel Duchamp’s Fountain – an appropriated urinal presented as art.

These three examples offer a single message: ‘If you really want to communicate, you’ve got to use familiar forms, things the mass audience is used to. This applies particularly to public sculpture – things in the great outside. Your audience hasn’t come to this location, especially to look at art. They’re present for all sorts of other reasons. You’ve got to pander to what you presume to be their taste. Art is not central to their lives. Make things easy for them.’

They glance, and then they pass on. There’s nothing (the audience thinks) upsettingly unfamiliar here. Just something that may arouse a fleeting sense of conscious virtue. In fact, public sculptures of this type do nothing to upset the proverbial applecart. Upsetting applecarts was, of course, the chief aim of the pioneer Modernists, but those days are long gone. What these supposedly contemporary artists want to do is to preach to the converted. The revolution in art is safely over.