The official Banksy website has confirmed that a mural which appeared on a Port Talbot wall is the work of the elusive Street Artist. Banksy has had a busy year with work popping up around the globe, a Paris mural To Coincide With World Refugee Day and a 20m high mural in New York to highlight to the detention of Zehra Dogan, a Kurdish artist, to name but a few. Now only 100 miles away from his Bristol hometown a new work highlighting environmental issues has been unveiled.

“I just want to protect it, and it is here for everybody,” says garage owner Ian Lewis

‘Season’s greetings’ is a piece which appeared on a breeze-block wall in South Wales. The artist used his verified Instagram account to confirm: “Season’s greetings” – with a video of the artwork. 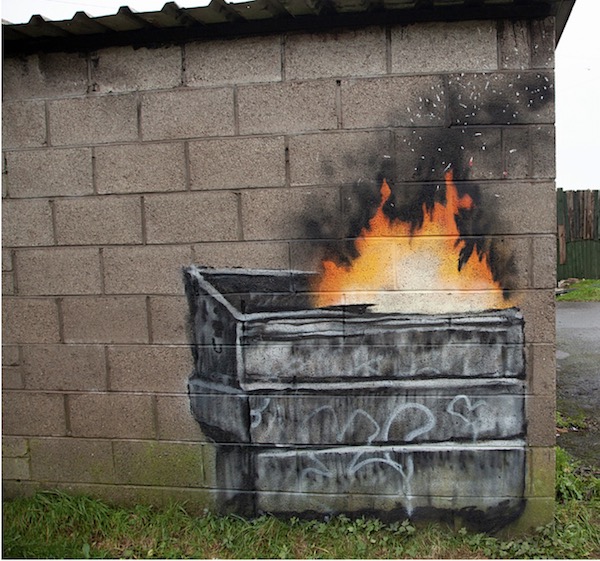 The dual aspect image depicts a child innocently playing in the snow while the other side reveals the snow is a polluting fire emitting ash. The child is breathing in the fumes as he tries to catch snowflakes on his tongue. The owner of the garage has received a valuable Christmas present and said he’s ‘not slept’ over fears it might be vandalised.

Ian Lewis, who built the garage in the 90s to prevent his car being damaged, said he found out about the possible Banksy “yesterday morning on my Facebook account”.

“I didn’t think much of it at the time, I knew a little bit about Banksy but I never thought it would be him – if it is him,” he said.

“I am very pleased, I think it is a smashing bit of artwork. It is good for the town and I just want to protect it, and it is here for everybody.”

“I just want to protect it, and it is here for everybody,” says garage owner Ian Lewis Plaid Cymru councillor for Aberavon, Nigel Thomas Hunt said the whole town had been “buzzing” with speculation that the work was by Banksy.

“The placing of the work is very clever, in between the blast furnace and the M4, yards from where Richard Burton was brought up and where we’ve had bonfires for years,” he said. “You can look at the painting and see the furnaces in the background.”

Anthony Taylor, deputy leader of Neath Port Talbot council, said: “The council has been liaising with the property owner throughout the day and has put in place fencing to assist in protecting this artwork whilst they consider what their next steps might be.

“We have also been in contact with other local authorities who have previously had Banksy artworks within their area, to take advice.”