Banksy’s Balloon Girl or Girl With A Balloon as it is officially titled, has been voted the nation’s favourite artwork. The populist poll sponsored by a new device which displays art as a TV screensaver when idling, spoke to over 2000 art enthusiasts to reach the verdict.

The study also found that contemporary artists had replaced old masters as the public’s favourites. Constable’s landscape, The Hay Wain was voted second. The 1821 masterpiece from the National Gallery collection has been a firm favourite for over a century.

The List firmly places art in the people’s hands

The kitsch ‘Singing Butler’ by Scottish painter Jack Vettriano takes third place. This over exposed Athena image appears on everything from greeting cards to throw pillows to mugs. Its syrupy mixture of pastiche Art deco and Hopperesque sentiment reinforces much of what a poll of this nature exposes. 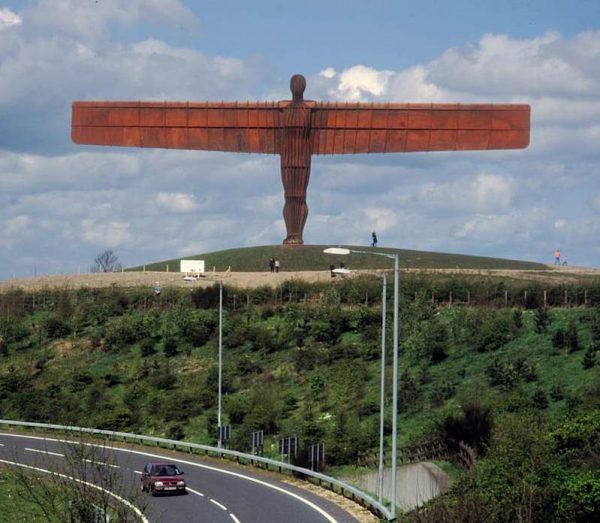 Antony Gormley ANGEL OF THE NORTH, 1998

JMW Turner’s The Fighting Temeraire, showing a warship tugged to the scrapyard, Thomas Gainsborough; Mr and Mrs Andrews, John Everett Millais; Ophelia, George Stubbs; Mares and Foals and John William Waterhouse; The Lady of Shalott are the only works over 100 years old on the top 20 list. Most works are contemporary with a few British Modern names like L S Lowry and Henry Moore thrown in for good measure.

The lack of YBAs such as Damien Hirst and Tracey Emin or Turner Prize winners is telling. For some reason, Album Jackets were allowed to be judged. The classic 1960s album sleeve by Sir Peter Blake for Sg Pepper along with Hipgnosis and George Hardie’s Dark Side of the Moon prism for Pink Floyd and Jamie Reid’s Never Mind the Bollocks album cover blur the line between Graphic Design and Fine Art.

Antony Gormley’s The Angel of the North and David Hockney’s A Bigger Splash is prominent on the list as is the graffiti artist Stik. Voters chose from a shortlist of artworks drawn up by Samsung

5• Antony Gormley; The Angel of the North

9• Hipgnosis and George Hardie; Dark Side of the Moon album cover

17• Stik; A Couple Hold Hands in the Street