A New Banksy mural has appeared, timed to the second at Marble Arch where climate activists have been protesting for the last few weeks. Extinction Rebellion has made an enormous impact on London and support has swollen since they first came on the scene.

The stenciled artwork depicts a young girl planting a seed, along with the words “From this moment despair ends and tactics begin” was found on a wall overnight. Until Thursday, the spot had been occupied by climate activists. 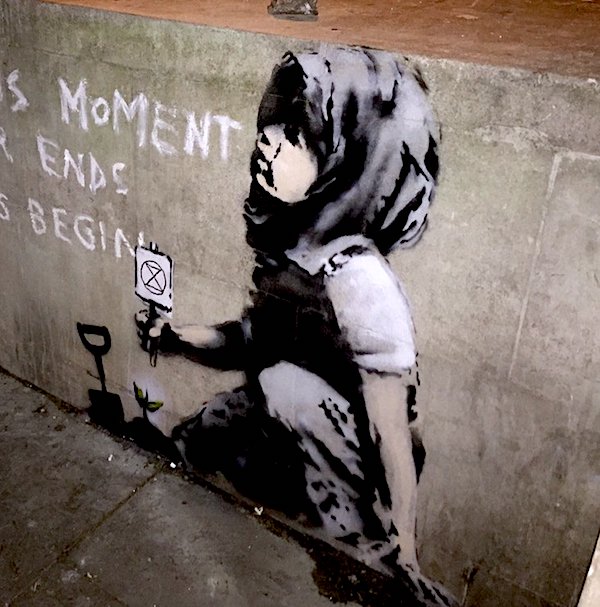 Extinction Rebellion’s branch from Bristol – where many believe the graffiti artist is from – tweeted they thought he created the mural while protesters were at Speakers Corner for Thursday’s “closing ceremony”.

More than 1,100 people have been arrested since 15 April as protesters blocked traffic at sites including Oxford Circus, Waterloo Bridge and Parliament Square.

Extinction Rebellion Say on their website: Human activity is causing irreparable harm to life in this world. A mass extinction event, only the sixth in roughly 540 million years, is underway. Many current life forms could be annihilated or at least committed to extinction by the end of this century. The air we breathe, the water we drink, the earth we plant in, the food we eat, and the beauty and diversity of nature that nourishes our psychological well-being, all are being corrupted and compromised by the political and economic systems that promote and support our modern, consumer-focused lifestyles.

We must act while we still can. What we are seeing now is nothing compared to what could come. Effects on global human society, if the climate and ecological emergency are not addressed, may spiral out of control.

Increased risk of wars and conflicts, but our leaders are failing in their duty to act on our behalf. Our current systems of governance is compromised by a focus on profits and economic growth. Politicians can be influenced by lobbies of powerful corporations and the media are hampered by the vested interest of corporate advertisers undermining our democratic values.

We have run out of the luxury of time to react incrementally.

We must radically and immediately begin reducing emissions and improving carbon absorption, drawing it down and locking it up again.

Only a peaceful planet-wide mobilisation of the scale of World War II will give us a chance to avoid the worst-case scenarios and restore a safe climate.

The task before us is daunting, but significant changes have happened before.

Banksy is an anonymous graffiti artist from Bristol, who uses subversive epigrams and dark humour to provide political and social commentary on streets, walls, and bridges of cities throughout the world. Banksy’s work grew out of the Bristol underground scene, which involved collaborations between artists and musicians. Banksy authentication and artist enquiries or reports of stolen work should be directed to Pest Control. The latest work has not appeared on the official Banksy website, the usual confirmation of an authentic Banksy, but stylistically this looks like the real deal! More to follow.