Banksy has donated £205,000 from the sale of a wall-sized artwork to anti-arms campaigners. The piece titled ‘Civilian Drone Strike’, was first unveiled at the Stop the Arms Fair art exhibition in east London. The subject of the work depicts drones destroying a child’s drawing of a house, with a child and dog panicking.

“It’s time to shut it down for good.” – Andrew Smith CAAT

The world’s largest arms fair, the Defence and Security Equipment International takes place annually in London.With more than 1,600 exhibitors from 54 countries selling tools of destruction, it is the focal point of anti-war protest every year. 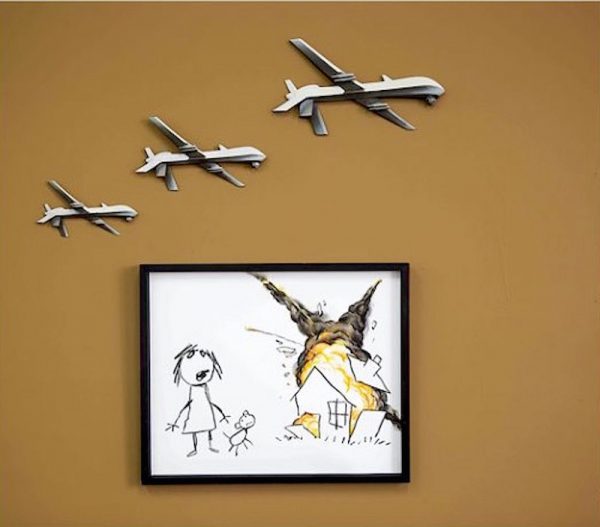 The money raised from the Banksy sale will be split between Anti-Arms Campaigners one of the exhibition’s organisers, Campaign Against Arms Trade (CAAT), and the human rights group Reprieve. Andrew Smith from CAAT said the money would be used “to ensure we mobilise even more people against the next arms fair so that we can stop it from happening”.

He added: “It’s time to shut it down for good.”During last week’s Defence and Security Equipment International (DSEI) fair, Mr Smith said it was “shameful that the government is welcoming despots and dictatorships to the UK to buy weapons”. He added: “If the government cares for human rights and democracy then it’s time to end its support for arms fairs like DSEI.”

Banksy is a legendary Bristol-born graffiti artist. His work typically includes satirical social and political commentary, and ranges from murals to sculpture and installation, often playing with the contextual aspects of the work. The artist’s first solo show was held in 2002 at Los Angeles’ 33 1/3 Gallery, and in 2003 he was commissioned to design to cover of Blur’s ThinkTank. Today, Banksy’s work appears internationally; most notably, he painted nine sardonic images on the Palestinian side of the West Bank barrier. In Summer 2009, Banksy took over the Bristol Museum and Art Gallery with an exhibition attracting over 300,000 visitors. His Dismaland project in Weston Super Mere attracted tens of thousands of visitors and boosted the local economy by £20m. The prophetic street artist created a centrepiece fire-ravaged Disney-like castle with payday lender stalls and a remote-controlled boat game which highlights the plight of immigrants. The show on the pier featured a Jimmy Savile Punch and Judy, highlighting domestic abuse scripted by the journalist Julie Burchill.

A number of high-profile artists and activists contributed work to the Art the Arms Fair exhibition, including Peter Kennard, Guerilla Girls and Darren Cullen.The art event closed on Friday.