“Major new Basquiat show opens at the Barbican – a place that is normally very keen to clean any graffiti from its walls.” – Banksy

The Street Artist Banksy has created two new artworks inspired by Jean Michael Basquiat. The murals were executed on a wall in the Barbican Centre in central London. The Murals were inspired by the largest Basquiat exhibition ever mounted in the UK which opens later this week.

The first artwork depicts a big wheel with people queueing up at a ticket booth underneath. Basquiat’s trademark crown motifs, found on some of his paintings replace the attractions passenger baskets. The second Banksy is captioned: “Portrait of Basquiat being welcomed by the Metropolitan police – an (unofficial) collaboration with the new Basquiat show.” It is inspired by Basquiat’s Boy and Dog in a Johnnypump – one of his best-known artworks. Banksy has often portrayed police officers stop and search as a repeating theme in his artwork. 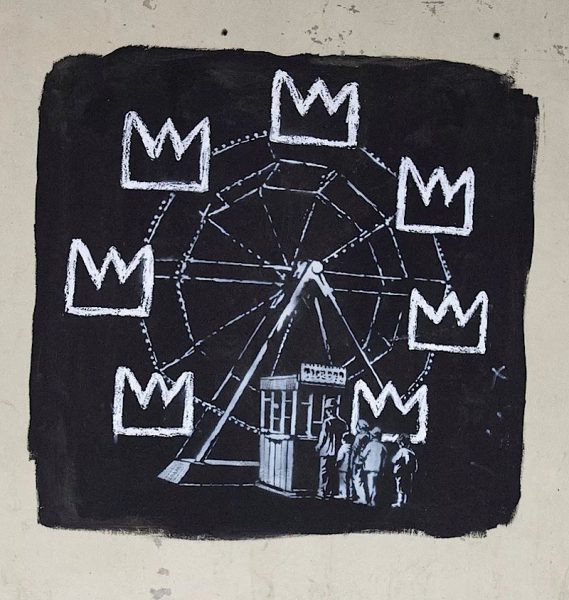 The new murals come days after Banksy donated £250,000 to anti-arms campaign organisations in protest to the arms-trade which is central to the British economy.  In a recent series of posts on Instagram, Banksy has confirmed the work as genuine.

Banksy is a legendary graffiti artist. His work typically includes satirical social and political commentary, and ranges from murals to sculpture and installation, often playing with the contextual aspects of the work. The artist’s first solo show was held in 2002 at Los Angeles’ 33 1/3 Gallery, and in 2003 he was commissioned to design to cover of Blur’s ThinkTank. Today, Banksy’s work appears internationally; most notably, he painted nine sardonic images on the Palestinian side of the West Bank barrier. In Summer 2009, Banksy took over the Bristol Museum and Art Gallery with an exhibition attracting over 300,000 visitors and hour-long queues all the way down the road. The artist has experimented with film, achieving an Oscar nomination for his documentary Exit Through The Gift Shop. He also created a theme park inspired installation aptly named Dismaland an ironic play on Disneyland. Consistently controversial, Banksy is described by some as genius and others as a vandal. Regardless of whether he is inspiring admiration or provoking outrage, his name is one that is well-known around the world.

The first large-scale exhibition in the UK of the work of American artist Jean-Michel Basquiat(1960­-1988) opens at the Barbican on 21st September. One of the most significant painters of the 20th century, Basquiat came of age in the late 1970s in the post-punk underground art scene in downtown New York. By 1982, he had gained international recognition and was the youngest ever artist to participate in Documenta 7 in Kassel. His vibrant, raw imagery, abounding with fragments of bold capitalised text, offers insights into both his encyclopaedic interests and his experience as a young black artist with no formal training. Since his tragic death in 1988, Basquiat has had remarkably little exposure in the UK; not a single work of his is held in a public collection. Drawing from international museums and private collections, Basquiat: Boom for Real brings together an outstanding selection of more than 100 works, many never seen before in the UK.