Banksy has spoken out about an unsanctioned, ticketed show featuring his work which has opened in Moscow. The street artist who has cultivated anonymity has reached out via his Twitter account.

“People either love me or they hate me, or they don’t really care.” – Banksy

The exhibition which opened in June states on their website, that it is a personal exhibition by Banksy, a famous street artist who changed the notion of modern art, will open in the Central House of Artists. Approximately 100 exhibits, including unique original works, 3D objects, rare prints and photographs by Banksy, and much more, will be exhibited for the first time in Russia. Banksy has denied any affiliation with or endorsement of a current exhibition dedicated to him in Moscow.

The description of the exhibition continues, “The exhibition comprises the collection of Lilley Fine Art, (a gallery in Co. Antrim), several museums of modern art, as well as different private collections from around the world. For the first time ever, a unique multimedia space introducing visitors to the creative work of this legendary graffiti artist will be arranged at the exhibition.

A man of mystery and of a catch-me-if-you-can type, a provocateur and prankster, he has changed the public opinion of street art. Banksy’s artworks, full of irony and wit, aimed against politics, war and capitalism are becoming the desired catch for journalists, photographers, vandals, art critics and collectors. The so-called Banksy effect, a great interest to street-art and street artists started in 2006 has blown up the art market – graffiti works made on the brink of kitsch are sold at prestigious auctions at record-breaking prices. Banksy’s art is modern mythology wrapped in mysteries, intrigues, provocative acts, and scandals.

Wednesday afternoon, Banksy’s official Instagram page showed an online chat which he denied any affiliation with. The artist was unclear about the existence of the show and stated, “You’re funny. What the hell is that?” ,in reference to his name on banners outside the museum.

The ticketed exhibition he continued, “You know it’s got nothing to do with me right? I don’t charge people to see my art unless there’s a fairground wheel.”Tickets to the show are $10 for weekend admission or about $20 for a personally guided tour.

Banksy ended the banter by saying, “Hmm—not sure I’m the best person to complain about people putting up pictures without getting permission.” 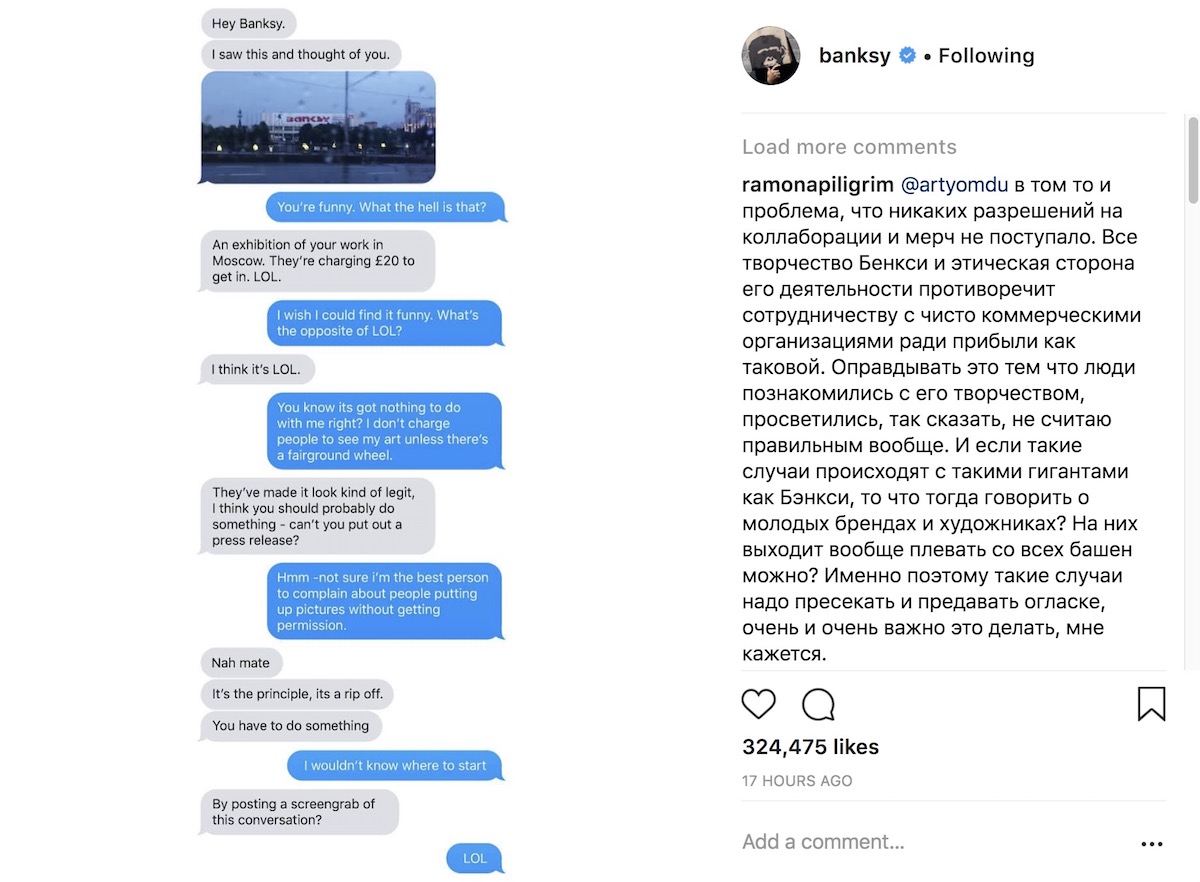