A mural by Banksy that was stolen last year from the Bataclan music hall in Paris has been found by police in central Italy. The painting, which depicts a young Madonna-like figure was painted as a tribute to the victims of the 2015 terror attack at the venue.

The Bataclan artwork was cut out and removed from one of the venue’s emergency doors by a group of hooded people using angle grinders.  La Repubblica reported it was found in a farmhouse in the Abruzzo region. The district attorney of the Italian city of L’Aquila, Michele Renzo, said: “The finding was possible following investigations conducted by the district prosecutor in collaboration with the police and the French judiciary.” The mural had been stolen in January 2019.

Meanwhile, Banksy, Bristol’s international artist/influencer has suggested a plan which should appeal to both critics of the sudden removal and dumping of the statue of slave-trader Edward Colston and the protesters.

The elusive artist has posted a sketch on Instagram of how he would like to see the bronze memorial hauled up from the water and returned to its plinth with modifications. He says: “We drag him out the water, put him back on the plinth, tie cable round his neck and commission some life-size bronze statues of protestors in the act of pulling him down. Everyone will be happy. A famous day commemorated.” 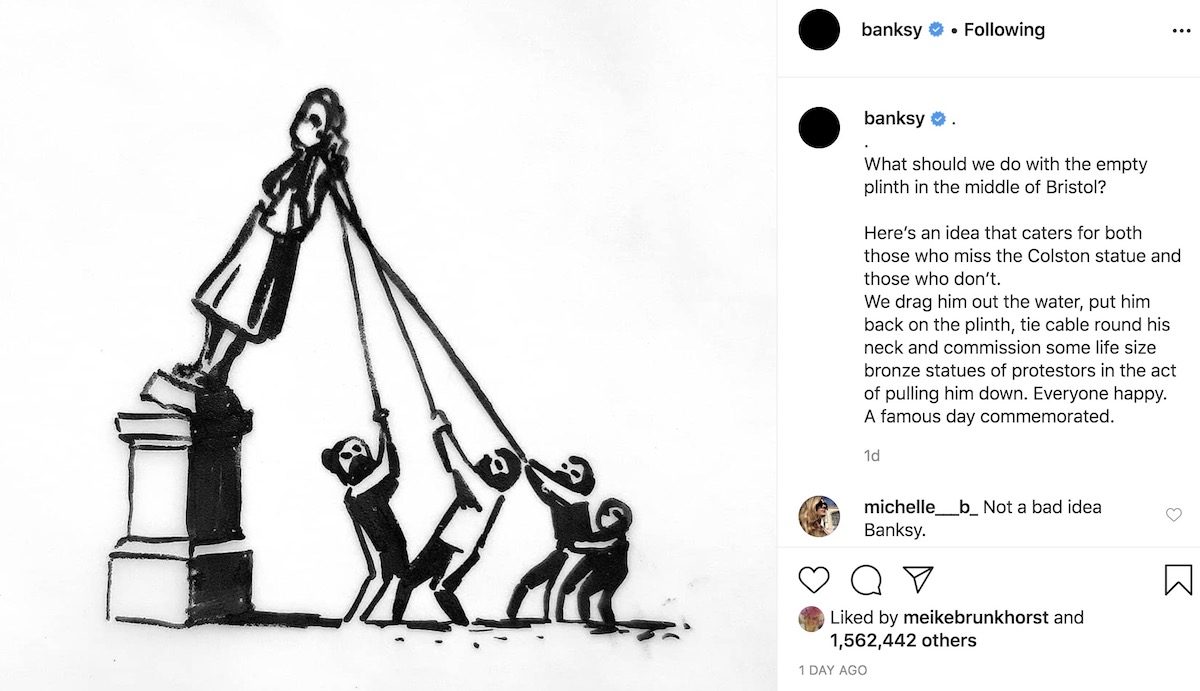 The 17th-century slave trader Edward Colston stood in the city centre until Sunday when it was torn down by protesters and rolled into the River Avon amid cheers from onlookers. Home Secretary Priti Patel called the tearing down of the statue “utterly disgraceful.”

The protesters said; “What we want goes beyond tokenism – we want institutions and organisations in the city to examine their history and acknowledge their individual roles in the slave trade and beyond.” Colston was a member of the Royal African Company, which transported about 80,000 men, women and children from Africa to the Americas. On his death in 1721, he bequeathed his wealth to charities and his legacy can still be seen on Bristol’s streets, memorials and buildings.