Banksy’s earliest mural in Bristol ‘Well Hung Lover’ has been vandalised by a rival graffiti artist. Black paint has been painted over one of the figures’ legs and the word KAPE and ‘FUCK Banksy’ is visible lower down. The legs are part of a nude man who is pictured hanging from a window ledge while a jealous husband looks for his partner’s lover.

Damage was revealed by John Nation a tour-guide on the Wall Tour on Saturday afternoon. He said; “It was only a matter of time before this happened. The Well hung lover gets dogged with. F*** Banksy as seen just now. That said this has been up since 2006 so it’s been up for a while. Good topic for my tour starting very soon”.

Nick Cole added; ” Is Graff forever? or is it for now? many works of art, are covered by works of art. although this may be deemed as desecration by vandals, criminals. or is Graff history just repeating? vandals is part of Graff history.

This is not the first time the artwork has been defaced. in 2009 seven blue paintballs were fired at it – reportedly by a rival graffiti artist – only three of which were deemed safe to remove. In 2009, just days into the Banksy Versus Bristol exhibition at Bristol Museum and Art Gallery, the mural was defaced by seven blue paintballs fired at the artwork from a bridge at the bottom of Park Street with a paintball gun. The vandal was never caught, though it was rumoured to have been carried out by another rival graffiti artist.

Banksy is one of most discussed, debated and acclaimed cultural figures of our age. His anonymous persona has captivated international audiences since the late 1990s. An urban artist, his media ranges from painting on canvas, screen-prints and sculpture to large installations and even the occasional livestock. His artwork reveals a unique mix of humour and humanity; it is created for the masses and affords a voice for those in – and indeed outside – of society who would otherwise not be heard. A recent example is his commentary on the refugee crisis and the after effects of Dismaland. His anonymity and refusal to conform mean that he is as difficult to nail down as is his artwork, and thus a survey of his works has never been officially or unofficially exposed in a private museum to a public audience. 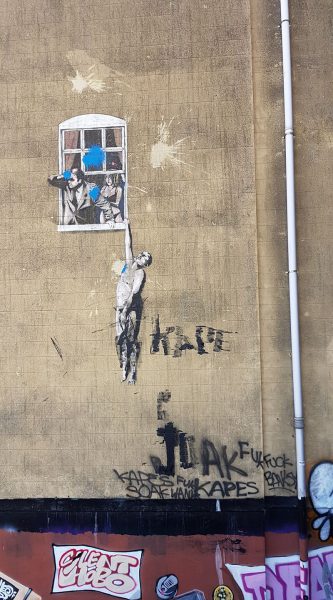