A studio in St Ives, Cornwall used by Dame Barbara Hepworth has been given Grade II-listed status. The former cinema and dance hall known as the Palais de Danse was purchased by the artist in 1961, at the height of her career. The space was able to accommodate the sculptor’s largest works and was adapted as her primary workspace. Hepworth used the studio, which was opposite her home, to create prototypes of major commissions, often cast in bronze.

The 45th anniversary of Hepworth’s death in 1975, aged 72 has been marked by this change of status to her workspace. The building has in the past been used as a school, cinema, dance hall, auction room, concert venue and ballet school. The Wakefield artist lived in Trewyn Studios in St Ives from 1949 until her death in a fire, on 20 May 1975. Pieces produced there included the famous Single Form, which was finished in 1963, which sits outside the United Nations Secretariat Building in New York. 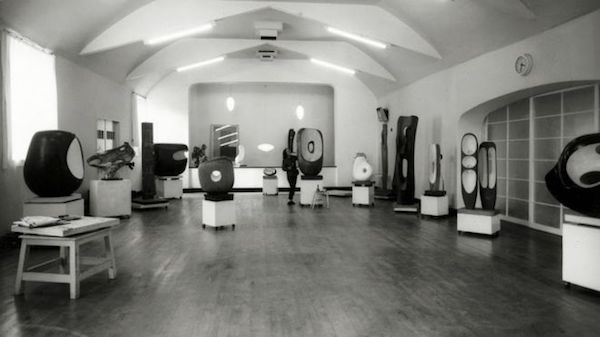 The Palais and Trewyn “represent almost all periods in Hepworth’s personal and creative life” and were “an important legacy of her contribution to the public and artistic communities of St Ives”, Historic The Palais de Danse was given to the Tate St Ives gallery by Hepworth’s family in 2015.

The building, dating back to the late 18th Century, was a navigation school in the early 19th century and converted into a cinema in 1910, before becoming a dance hall in 1925. From 1939, it was used for auctions and concerts. It was briefly a ballet school and continued to be used for dance until Hepworth bought it in 1961. It has been largely undisturbed since her death. Historic England regional director Rebecca Barrett said the listing would help maintain a building that provided “a unique insight into Hepworth’s creative process”.

Hepworth studied at Leeds School of Art from 1920–1921 alongside fellow Yorkshire-born artist Henry Moore. Both students continued their studies in sculpture at the Royal College of Art in London. Both became leading practitioners of the avant-garde method of Direct Carving (working directly into the chosen material) avoiding the more traditional process of making preparatory models and maquettes from which a craftsman would produce the finished work.

From 1924 Hepworth spent two years in Italy, and in 1925 married her first husband, the artist John Skeaping, in Florence; their marriage was to last until 1931. From 1932, she lived with the painter Ben Nicholson and, for a number of years, the two artists made work in close proximity to each other, developing a way of working that was almost like a collaboration. They spent periods of time travelling throughout Europe, and it was here that Hepworth met Georges Braque and Piet Mondrian and visited the studios of Picasso, Constantin Brancusi, and Jean Arp and Sophie Taueber-Arp. The experience was a hugely exciting one for Hepworth, for she not only found herself in the studios of some of Europe’s most influential artists, which helped her to approach her own career with renewed vigour and clarity, but also found there mutual respect. The School of Paris had a lasting effect on both Hepworth and Nicholson as they became key figures in an international network of abstract artists.