Bellotto masterpiece, ‘The Fortress of Königstein from the North’, which was due to be exported from Britain, has been saved for the nation and goes on display in Trafalgar Square today (Tuesday 22 August 2017).

Bernardo Bellotto’s works are among the very greatest of 18th-century view paintings, and The Fortress of Königstein from the North is undoubtedly one of the finest examples.  It stands out as a highly evocative and beautiful depiction of a fortified location within an extensive panoramic landscape and has no real parallel in European painting.

Bellotto was once overlooked in favour of his more famous uncle, Canaletto

If Bellotto was once overlooked in favour of his more famous uncle, Canaletto, today he is recognised as one of the most distinctive artistic personalities of his century. The acquisition of this masterpiece by the National Gallery will cement Bellotto’s reputation with both British and international visitors, giving him a significant place on the walls at Trafalgar Square that is long overdue.

The National Gallery is very strong in 18th-century view paintings, however, almost all of our works are of Italian sites. Bellotto’s The Fortress of Königstein from the North is the first major 18th-century landscape at the National Gallery to depict a Northern European view, and so this acquisition creates a bridge between northern and southern European painting in the collection. 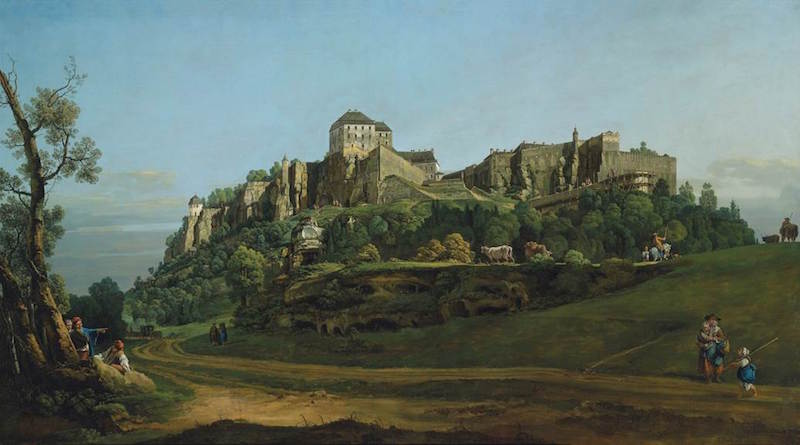 Bellotto masterpiece, ‘The Fortress of Königstein from the North’

The £11,670,000 acquisition has been made possible thanks to a generous legacy from Mrs Madeline Swallow, a £550,000 grant from Art Fund, contributions from the American Friends of the National Gallery and The National Gallery Trust, and the support of Howard & Roberta Ahmanson, The Deborah Loeb Brice Foundation, The Manny & Brigitta Davidson Charitable Foundation, The Sackler Trust and other individual donors, trusts and foundations.

The vast (132.1 by 236.2cms) panoramic painting which depicts the Fortress of Königstein, near Dresden and is one of a series of five large-scale views of the ancient hill-top fortress commissioned by Augustus III, King of Poland and Elector of Saxony, in about 1756. Here, the Fortress is seen perched atop a crag, its fortifications providing an imposing contrast to the verdant landscape that surrounds it, in which peasants talk and work. Bellotto combines topographical accuracy in the fortress with pastoral invention in the figures. Imbued with a monumentality rarely seen in 18th-century Italian view painting, The Fortress of Königstein from the North dramatically illustrates the very different direction in which Bellotto took the Venetian tradition of the veduta.

The escalation of the Seven Years’ War in Saxony – a war that reshaped the balance of power in Europe – just after the series was commissioned meant that the views of Königstein were never delivered. All five paintings were imported into Britain, probably during Bellotto’s lifetime, and they all remained in this country until 1993 when one of them was sold to Washington.* Unlike Canaletto, today Bellotto is underrepresented in the UK: there are just thirteen Bellotto paintings in our public collections, nearly all Italian views and mostly minor works.

Visitors can see The Fortress of Königstein from the North from today as part of a special display in Room 40 dedicated to its purchase. In early 2018 it will move to Room 38 and hang alongside works by fellow Italian view painters, his uncle Canaletto and Canaletto’s successor in Venice, Francesco Guardi.

The Fortress of Königstein from the North will also be the focus of wide-ranging public programmes engaging audiences nationwide, including a touring exhibition and educational programmes at museums across the UK: locations to be confirmed shortly.

Arts Minister John Glen said, “This stunning painting demonstrates Bellotto’s masterful technique and striking composition. I’m delighted to hear that thanks to the Government’s export bar process it has been saved for the nation and will now be displayed at the National Gallery for the public to enjoy.”

Stephen Deuchar, Art Fund Director, said, “The acquisition of this masterpiece of grand European topography is an important save for the nation’s collections, and Art Fund trustees are delighted to have made a major contribution towards securing it for the National Gallery and for the pleasure of its visitors from around the world.”

National Gallery Director, Dr Gabriele Finaldi, says “This superb painting, which has been saved for the nation, shows Bellotto as one of the greatest view painters of his time. It is a truly significant acquisition for the National Gallery by an artist whose career took him to several European capitals, including Venice, Dresden, Vienna, Munich and Warsaw.”

Born in Venice in 1722, Bellotto had a precocious talent. He received his earliest training with his uncle Canaletto and was accepted into the Fraglia dei Pittori (Venetian painters’ guild) aged just 16. In the 1740s he travelled extensively around the Italian peninsula, producing views of various cities. He was called to Dresden in 1747, and the subsequent year was appointed Court Painter to Augustus III, King of Poland and Elector of Saxony, receiving the highest annual salary ever paid by that court to an artist. Following the escalation of the Seven Years’ War, Bellotto worked at the courts of Vienna and Munich, before returning again to Dresden. He spent the last thirteen years of his life in Warsaw.

Although contemporaries appear to have had some difficulty distinguishing between Bellotto’s Venetian views and those of his uncle, there are marked differences between their styles. Bellotto tends towards a more silvery light, a cooler palette, and a greater sense of monumentality (even when a composition is derived from a Canaletto prototype, Bellotto tended to increase it in both size and scale). One of the most distinctive elements of Bellotto’s pictures is his use of impasto, particularly in the sky, where broad brushstrokes denote clouds and changing light on the horizon.

Today, Bellotto is best known for his views of Northern Europe, and the series of views he painted for Augustus III during the first Dresden period mark the height of his achievements. All are large-scale works characterised by panoramic compositions, strongly contrasted use of light and shadow, and meticulous attention to architectural detail. Such was Bellotto’s precision that his late views of Warsaw played a crucial role in that city’s reconstruction after the Second World War.