I know it might be difficult to divert your attention away from Dominic Cummings and his Odyssean explanation for a journey he chose to take because he thought he could, so pretend this news item is Barnard Castle to help adjust your’ outlook”. Unlike DC, this glimmer of hope is available to enjoy in plain sight and now viewable in West Hampstead. An arts project focused on human rights awareness has had their name and mission statement, “Through Arts We Rise” painted, sprayed and blessed by the world’s foremost street art lettering demi-god, Ben Eine. Due to inside knowledge (Thank you Joe Bloggs Artist) I was given a tip-off that I didn’t even need to drive to the point of creation but could stroll up the road to West Hampstead Thames link, and take a few pics of the creative process, so here are those, along with a social distance interview with the mighty Kosovan Lady, Alketa Xhafa Mripa at the helm of the project 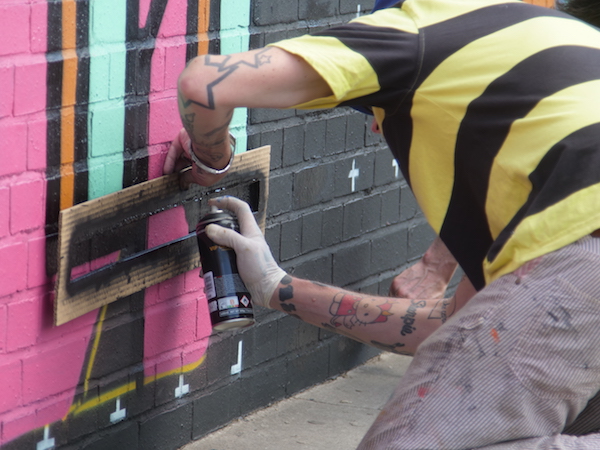 “My work is about human rights issues and social injustices. This year I created a kind of a hub, a community group called “Through Arts We Rise”, which again is going to deal with human rights issues and injustice, which is precisely what I do with my art. I’m opening up to more artists and activists to join in the group. Our first work is our first projects from through our three races shedding light to the homelessness issue.”

“In January, I came up with the projects and then the lockdown happened and everything. So we had to postpone it more or less. But the ideal initial idea was to do a mural because the group is in West Hampstead. I wanted to create something in West Hampstead. And this is a spot where John, John or the spider-men, as it was known, or the Bookman stayed for more than 20 years. So John was not homeless, he had the flat, but he chose. It was a choice to live on the streets. So he and his dog, sugar-free like sugar stayed on the bridge. So I thought, where better way to do this than on the bridge where he stayed a tribute to him because he died last year. So a tribute to him one year since we lost him. At the same time, raising awareness about homelessness in general. Why homelessness? Because he’s seen it is like the most vulnerable people in our society. And usually, you’re kind of fast walk them. 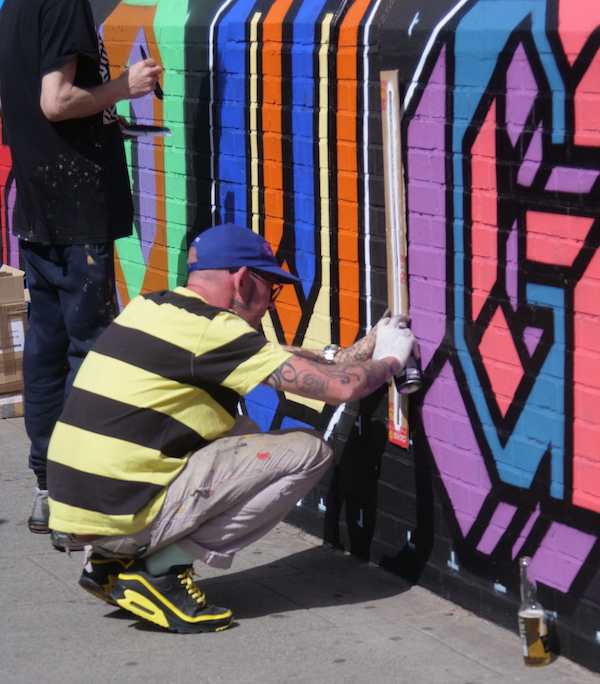 And I really wanted to bring those faces in those stories, those eyes behind those faces, behind those portraits to light. So I started researching and I really because I wanted to do a mural. I wanted to get the best buzz graffiti artists out. They would do this mural. As I was searching, I came across Ben Eine and decided to email him explaining about my background and what the project is about and if he Would you like to join in? My surprise is that he loved the projects and for what it is. Count me in. I contacted Zaboo. Same thing. I said I’m doing this and this and that. The portraits for the homeless. She said, yeah, that’s great. She joined them. So I’m one lucky girl to have them too. It’s worth mentioning to remember that this is voluntary work. They’re not making any money only on providing the sprays and stuff. They’re doing this for free. So as you can see, it’s a great kind of. This is what class-B rise is, connecting these people to bring to life social important injustices in this world. So I know people as they pass, they really can’t look down. They’re going to look up and straight to the portraits in front of them and they are here to stay alive. Right. Every person.”

Born in London, Ben Eine is one of the most successful street artists in the world and is regarded as a pioneer in the exploration of graffiti letterforms. Originally, a writer, Eine started his career over 25 years ago, leaving his first tag all over London before developing his distinct typographic style. Eine aimed to point out that street art is distinct from graffiti. He believed “street artists want to add something to the environment.