The Ben Uri Gallery and Museum, known internationally for its extensive collection of Jewish immigrant art is to sell off part of its permanent collection to fund wider plans to include immigrant and refugee artists from all global backgrounds. The gallery celebrated its centenary in 2015.

The Ben Uri has a history of selling off their family jewels. In 1984 the gallery sold Mark Gertler’s masterpiece The Merry Go Round to Tate

As part of BURU, the current Museum Collection has been subject to an exhaustive, curatorial-led re-assessment, alongside the Collecting definitions and policies. The redefinition has resulted in a definitive refinement of the Collection, representing some 700 works accounting for some 10% of the total insurance value, which will be the subject of disposal via sale (starting with Sotheby’s in November and December this year) over the coming years and free of charge, inter-museum and community gift transfers. These institutions will be selected on the basis they, unlike Ben Uri, will be able to generate meaningful public benefit from them. The majority of the works identified for new homes have rarely been exhibited. 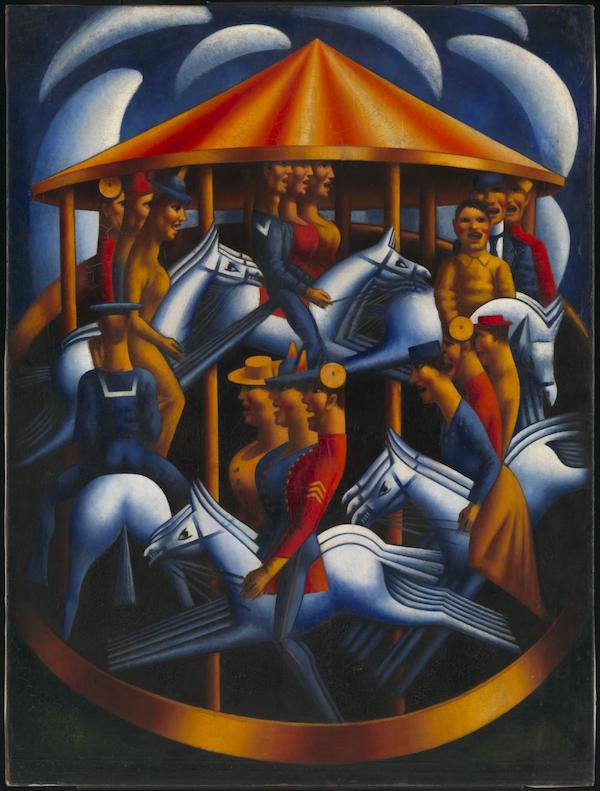 The Ben Uri has a history of selling off their family jewels. In 1984 the gallery sold Mark Gertler’s masterpiece The Merry Go Round now in the collection of Tate Britain.

The residual Collection will benefit from an increased acquisitions budget to grow the representation of immigrant artists in parallel with our research focus. The ambition is to build the country’s most authoritative collection of works by immigrant artists to Britain since 1900.

The gallery will also launch the museum sector’s first formal Research Unit on the immigrant contribution to British Visual Arts culture since 1900. The Research Unit (BURU) is charged with compiling and publishing the first on-line, fully-illustrated dictionary of the immigrant contribution, Jewish and all; addressing artists across all media, teachers, scholars, critics, publishers, suppliers and patrons. Europe and Russia will be the first areas to be addressed.

Ben Uri first started formal research on the immigrant artist experience in 2003, inspired by the Jewish experience in the early years of the 20th century, from which Ben Uri emerged in 1915, and the second wave of Jewish immigrant/refugee artists escaping or surviving the Holocaust. Ben Uri was the first museum to appoint a separate Research Fellow for the Study of Immigrant Artists (in the name of Eva Frankfurther (1930-1959) in 2011. This elevation of priority fits perfectly within the museum’s focus of Art, Identity and Migration.

The museum will be opening a month-long exhibition celebrating essential acquisitions in this field since it reopened in 2002, after 6 years without a gallery. The exhibition opens on the 31 October, running until 2 December at its gallery in Boundary Road, off Abbey Road, St John’s Wood London NW8 0RH. These include masterworks by Auerbach, Bomberg, Chagall, Epstein, Gertler, Grosz, Herman, Rosenberg, Solomon, Soutine and Wolmark, alongside contemporary immigrant artists including Guler Ates, Tam Joseph, Hormazd Narielwalla and Zory Shahrokhi.

This will be the last full-scale exhibition at Ben Uri in Boundary Road as from February next year the gallery will open to the public, free of charge, every Monday, study days, events and by appointment. Ben Uri will continue to curate and tour full-scale survey exhibitions both nationally and internationally.

Ben Uri will launch the museum sector’s first Arts and Dementia Institute. This follows ten years working in the sector and five years since shifting from activity/entertainment to defined, researched and critically assessed art interventions within residential and care homes. The Institute is charged with generating the first UK (if not, we understand, internationally) accredited set of programmes/art interventions that have inbuilt adaptability of engagement which can trigger and or improve cognitive behaviour past the moment of impact.

One unique feature of our programming is the careful selection of artworks used (in full-scale reproduction form) to recognise, and best engage the client groups’ heritage, characteristics and, where known, interests. The works selected are from the Ben Uri Collection as it is dominated by two distinctive features often found to be highly relevant to the client groups – 65% made up of immigrant artists, being 281 artists from 34 countries of birth – and 24% of the artists being women, compared to 4% nationally. One of many distinctive features is that we do not use the classic, iconic works of art history. We carefully select from our diverse collection to best reflect the recipients’ backgrounds.

The issues of how our society (and globally) addresses ageing, loneliness, social isolation and those living with dementia are critical within the spectrum and growing understanding of mental health challenges, both from the personal perspective and the cost to the NHS. The initiative is designed to develop intuitive, adaptable, thoroughly researched, accredited and, equally important, cost refined and effective interventions that can be rolled out nationally through NHS commissioning bodies and the private sector alike.

Results of our work to date give us the evidence and confidence we can further develop our programmes to materially lift the average benefit of art interventions nationally, through dedicated and thoroughly researched programming.

“It is now close to 20 years since we relaunched Ben Uri in 2001 with strategies to move from a volunteer-based community art society, founded in the Jewish East End of London in 1915, to the centre of the mainstream secular museum world. – Executive Chair, David Glasser commented:

The strategy was to build the museum’s collection qualitatively, programming and reputation to raise donor support to afford proper gallery premises in central London.

We concluded after our centenary exhibition at Kings College in Somerset House, which attracted over 30,000 visitors in 2015, that the property market had outpaced our potential to secure such premises and that the museum/charity’s long-term value would be best served and shared by redefining our public engagement and consolidating resources.

This could be achieved either through a strategic merger, most likely with a university that shares our research focus and has a complementary collection – or alternatively, independently concentrating on three core areas of focus; research on the modern and contemporary Jewish and other immigrant contribution to British visual arts since 1900, our clearly redefined collection, and our work on arts and dementia interventions.
This new strategy puts distinctive and meaningful, widely engaging public benefit at its heart, based on a critical analysis of return on investment from assets employed.”

Ben Uri was founded in 1915 in the Jewish ghetto of Whitechapel, in the East End of London, by a Russian immigrant artist, Lazar Berson, who came to London from Paris in 1914. Berson was a member of the Ecole de Paris and shared an apartment with the famous sculptor Jacques Lipchitz.
Ben Uri, registered charity #280389, was the cornerstone of the Jewish community’s cultural activity until the late 1970s. Ben Uri Art Society, as it was then, lost its gallery in 1995 when the synagogue building, in which it was housed, was sold.

A new Board of Trustees was elected in October 2000, led by current Executive Chair David Glasser to deliver a radical strategy to reshape and reposition the institution.

The charity/museum was relaunched in 2001 by the new Board, changed its name to Ben Uri Gallery and Museum and its operating standards and programming to match.

It rented its current temporary gallery in St. John’s Wood in June 2002. It was to all extents a ‘startup’ museum piloting its way into the centre of Britain’s mainstream arena.

Since 2001 Ben Uri has curated 90 exhibitions, toured to 20 different cities across three continents, published over 40 books and catalogues distributed nationally and internationally, and produced over 50 short films. Its research on immigrant artists is recognised internationally. It has pioneered a new approach to using art differently through its Arts and Dementia programming being thoroughly researched and planned, in due course, to be a national standard.