NO GERMANS IN BERLIN?

I spent some time in Berlin and Hanover last week – both are recommended. Proof, were it needed, of how very international Berlin’s art scene is came with the range of artists on show at the end of the current season. Whether it be major institutional exhibitions (Bruce Nauman, Mona Hatoum, Rudolf Stingel, Olafur Eliasson, a city-wide celebration of African artists), well-established artists in commercial spaces (Linda Benglis, Damien Hirst, Gary Hume), increasingly highly-regarded figures (R H Quaytman, Kelley Walker, Sofia Hultén), new contenders (see below) or the Biennale itself, Germans were in a small minority. My examples above include none, and it wasn’t hard to identify interesting five non-German artists whose work I knew little of, along with one German in Hanover… 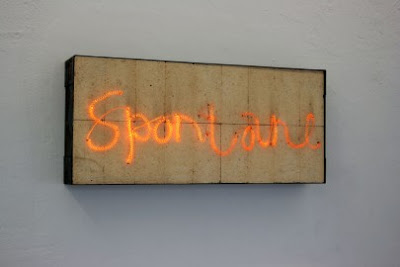 FEINKOST stands somewhat apart from most of the gallery groupings, but fits well with a trip to the Berlin Wall memorial exhibition. Recent Glasgow graduate Kate V Robertson (born Edinburgh, 1980 ) makes beautiful use of the airy two bays and its material substance with an installation of sculptures from materials playing on precarious states of transition. One wall seems to peel away, a black lightbulb turns out to be a novelty bicycle horn, and the ceiling is held up by a Brancusian column of paper. ‘Spontane’, a fragile neon-type piece, is made from the nickel chromium wires found in toasters – so it’s no surprise that a nearby work exploits the aesthetics of having been burnt. Meanwhile, a leaf ticks on the wall and a latex brick – perhaps referencing Berlin’s reconstructive efforts – repeatedly puffs up and collapses. Each piece feels as if it is on the way both from one state of being to another and on to the next piece in the narrative of the space. 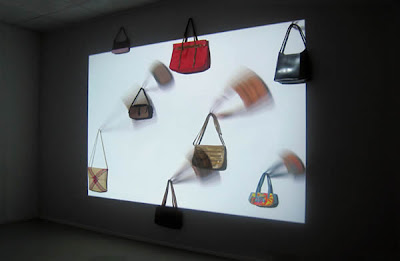 The Temporäre Kunsthalle is a three year gallery project located on the site of East Germany’s People’s Palace, which was controversially torn down to be replaced shortly by a version of the eighteenth century Prussian palace which preceded it. The last show, curated by artist John Bock, is a teetering three storey walk-in Gesamtkunstwerk (or total artwork) featuring 63 contributors. You would expect such madness as rooms of sexy socks by Matthew Hale and burnt pizzas by Martin Kippenberger, and Bock delivers plenty. The black humour includes Heike Aumüller’s film of a man cutting off his own head and carefully dropping it into a plastic bag, lightened somewhat by the adjoining installation by Berlin-based Icelandic artist and musician Egill Sæbjörnsson (born Rejkjavik, 1973). In that, eight handbags hang on the wall, with a video projection of the same bags superimposed on them. The projected handbags spin round, dance and leap across to other bags to a wittily appropriate score of bells and voices. Like the whole project, it’s too much fun to puzzle unduly about the meaning…

The six venue Berlin Biennale was pledged to focus on ‘what is waiting out there’ – in the context of reality becoming an increasingly problematic state as we suspect it of illusion. Perhaps that theme was tackled best by Amsterdam-based American artist Mark Boulos (born Boston, 1975), who rather forbiddingly declares that his installation of two synchronised films confronting each other is about Marx’s concept of commodity fetishism (whereby, just to remind you through Boulos’s words, ‘commodities seem to have metaphysical properties even though they are material things… because they obscure the labour relations which produce and distribute them’). ‘All That Is Solid Melts into Air’ (a title from the Communist Manifesto) compares two groups struggling to control oil. First, guerillas in the Niger Delta, who aim to redistribute oil company wealth to the local communities and subscribe to primitive spiritual beliefs; and second, stock market traders at Chicago Mercantile Exchange, frenetically dealing in future oil which doesn’t exist yet and may never. Both groups, Boulos’s work suggests, are at a remove from the world as it exists: the reality of oil and the wealth it creates ‘melts into air’ at both ends of the process. All of which comes across much more powerfully in the work than in the theory: it’s a hypnotically easy quarter hour to watch. 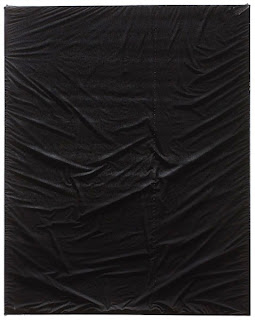 There was hardly any painting in the Biennale, and you could argue that Berlin-based Dutch artist Vincent Vulsma’s thirteen-strong series ARS NOVA E5305-B is on the margins of the practice. Vulsma (born Zaandam, 1982) is more conceptual than painterly: another recent project involved symbolically bisecting tribal shields from Papua New Guinea. Vulsma didn’t unpack the Chinese-made canvasses from which these paintings take their name, but sprayed their shrink-wrap covers with black paint. That made the shrinkwrap buckle and fold. Next, he sprayed the folds white. As the paint was allowed to dry, the shrink-wrap contracted again, but retained an image, like a trompe l’oeil of drapery, of the process it passed through. Thus the painting represents its own making in a particularly literal way, whilst suggesting that – just as in Boulos’s account of the oil industry – there is a secret reality at work. 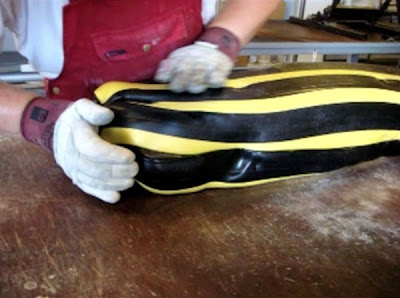 The area behind the Hamburger Bahnhof Museum für Gegenwart has recently been colonized by big galleries. They include Haunch of Vension, who have a magnificently-scaled and advantageously painting-free Damien Hirst show (albeit diluted by Hirst sharing with his friend Michael Joo). TANAS, which specializes in contemporary Turkish art, was a gallery new to me showing an artist – Ebru Özseçen (born Ismir, 1971) – I didn’t know. Özseçen’s ‘Kismet’ is an extensive overview of 15 years’ wide-ranging work in video and installation. One of her interests is the fetishistic attraction of unusual forms of craftsmanship. My wife was with me, and while she was particularly taken by ‘Bitter Chocolate Love’, a film of viscous black chocolate being filtered through a silk stocking, I preferred ‘Baby Lakritz’, which shows an intermediate sculptural form from the production of liquorice. But perhaps that just reflects our differing tastes in sweets… 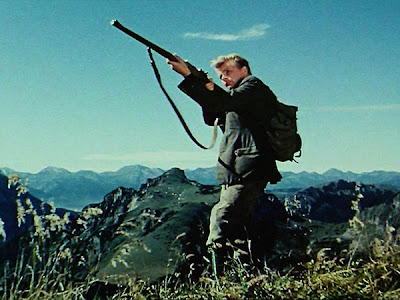 Hanover is, unsurprisingly, more locally-focussed than Berlin. Its current highlight is the Kestner Gesellschaft: a retrospective of Larry Sultan’s photographs, and a show from Carsten Nicolai which includes a walk-on installation of mirrors and an intricate and amusing dance by a spotlight. Five galleries are hosting a 68-artist mixed exhibition of art from Saxony. My favourite was ‘Silberwald’ (Silver Forest), Christoph Girardet’s three-screen video collage made from seventy 1950s German films returning to traditional homeland values. Such is the uniformity of the source material that Girardet is able to conjure a narrative of a hunter and his love interest in suitably empathetic nature scenes so that it runs in parallel across the three screens, and with the source film on each scene constantly changing. The result is a hypnotic exposure of the mechanics by which cultural values – such as the concept of the idealised ‘homeland’ – are constructed. Girardet (born near Hanover in 1969) has a substantial history of experimental film-making behind him, which on this evidence is well worth investigating.