Administrators from the London-based firm ReSolve, have been called in to sort out the financial mess at Blain|Southern, one of London’s top art galleries. A meeting for all creditors, including some of the artists, has been scheduled for this week.

I walked by the gallery earlier today and many of the books and catalogues have been removed from the once immaculate entrance to the gallery, which has remained shuttered since last week when a statement from Harry Blain, Founding Director, Blain|Southern was released. A sign in the window reads The gallery is closed please call 0207 493 4492 for any enquiries during office hours. We apologise for any inconvenience. The name of the artist Michael Simpson is still clearly seen on the gallery wall. A haunting reminder of the gallery’s last hurrah.

‘I have reached the difficult decision to close Blain| Southern’s galleries in London, Berlin and New York – HB

Ten years ago, together with Graham Southern, I established Blain|Southern. Throughout our partnership, it was an honour to collaborate with so many talented artists and build an exhibition programme that reflected and celebrated the breadth of contemporary art practice worldwide. Alongside the programme, the gallery facilitated new commissions, public loans and museum exhibitions for our artists while supporting their broader activities. 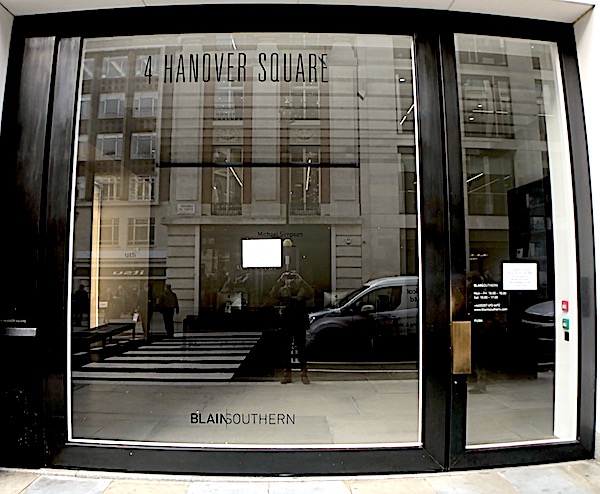 Despite the support of dedicated gallery staff, I deeply regret that I have been unable to secure the gallery’s future long term. I want to thank all the artists, collectors, institutions, museums, staff and everyone who has worked with the gallery over the last decade.’

The gallery, one of London’s best, had an undercurrent of trouble since the Autumn when the gallery’s co-founder Graham Southern decided to leave the long term partnership. Director Sir Charles Saumarez Smith, the former Director of the National Gallery soon followed. The exit of their excellent head of press Toby Kidd was also a surprise. The gallery had been operating with a skeleton staff for months. Still, it was apparent that things were falling apart when the highly regarded Director of Exhibitions Craig Burnett left suddenly before Christmas. A parade of artists marched out the door, including Sean Scully, The Chapman Brothers, and Mat Collishaw, who all used Instagram to quit.

An industry insider told Artlyst that the problems came to a head when the Irish/American artist Sean Scully asked to be paid for work sold by the gallery amounting to £4m. The gallery was unable to pay, and this led to a legal notice being served. Apparently, this was just the tip of the iceberg. The gallery clearly overstretched themselves with the opening of an excessive New York Gallery space in the former Cheim and Read premises. The gallery was said to be $13m in the red before launch. Reading between the lines, HSBC the gallery’s bank must have called in outstanding loans that the business took out in July 2019.