I have just returned from an outing to Bloomberg’s new European headquarters in London and it certainly doesn’t disappoint. The building designed by Sir Norman Foster is almost entirely sustainable, and filled with Contemporary art treasures commissioned by Michael Bloomberg himself along with two other curator/advisers.

Artists include Michael Craig-Martin, Olafur Eliasson, Arturo Herrera, Cristina Iglesias, David Tremlett and Pae White who have created site-specific works for Bloomberg’s building. The works are complemented by an existing work by Ben Langlands & Nikki Bell and a new commission by Isabel Nolan for Bloomberg SPACE. The building, situated in the heart of the City of London. Space will now be a purpose-built gallery for new commissions and exhibitions.

The series of six new commissions – a broad range of large-scale installations – each developed to be integral to the building’s outdoor and interior spaces – build on Bloomberg’s commitment to supporting international contemporary artists and art projects across the world. The ground-breaking new London building defines a new generation of 21st-century office design.

The artists were encouraged to think about their projects holistically— not as isolated objects to be temporarily dropped into position, but as a substantial and lasting expression of the features and history of the site. The artists’ works are woven throughout the complex in areas where Bloomberg employees and visitors will have the opportunity to encounter and enjoy them.

The new commissions include: 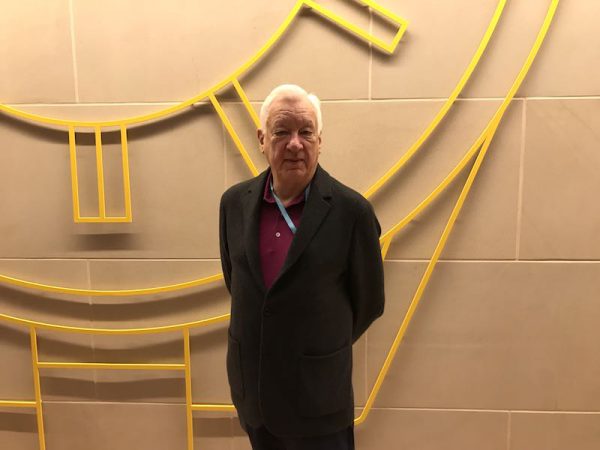 Michael Craig-Martin, Lexicon Located on the walls of floors 2, 3 and 4. Lexicon, an installation in 12 parts, takes everyday objects and enlarges them to a monumental scale. Each component has been strategically positioned on the interior stone walls of floors 2, 3 and 4. Several of these objects have been bisected — suggesting that they slipped between successive floors of the building, while others stand on their own. The final effect strikes a playful balance between familiarity and mystery, engaging our imagination and memory. 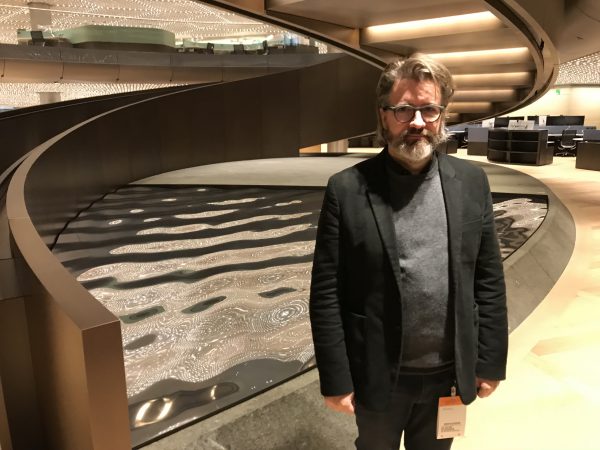 Olafur Eliasson ‘No future is possible without the past’

Olafur Eliasson, No future is possible without a past Located in the Vortex and the ramp base on floor 2. Olafur Eliasson’s work for Bloomberg London consists of two parts, both of which are integrated into the primary paths of arrival and circulation for all visitors and employees. The first part crowns the central vortex, the dynamic foyer where people gather and then disperse after entering the building. This undulating surface of milled and polished aluminium, measuring more than 400 square feet, comes to life by reflecting fragments of the vortex and the bustling activity below, highlighting the presence of visitors as active co-producers of the space. The second intervention is located directly above its counterpart, at the base of the dramatic ramp that spirals from the second floor up to the eighth. Also made of milled and polished aluminium, it creates the effect of a pond’s surface on which daylight shimmers, as if it were the top of the rippling water surface visitors previously viewed from below when they entered the building. 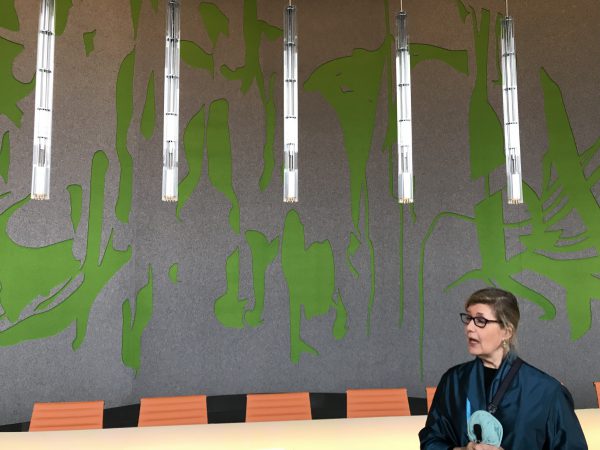 Arturo Herrera, Sortario Located on the 6th floor in the dining room. Sortario is a “wall painting,” crafted from two layers of machine-cut wool felt, which combines bold, abstract shapes with subtle references to Roman artefacts uncovered on site by archaeologists during the construction of Bloomberg London. 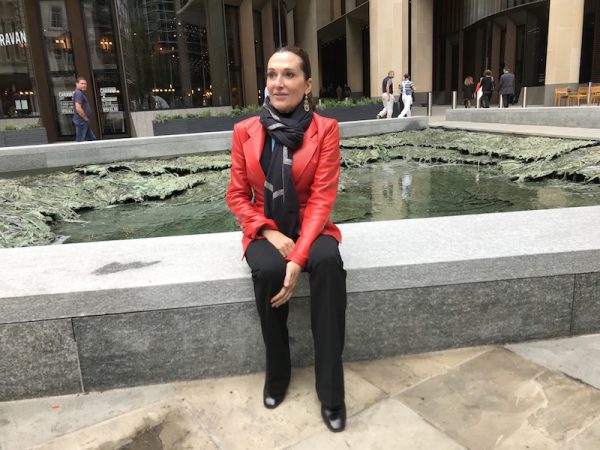 Cristina Iglesias, Forgotten Streams Located in two of the public plazas around the site This sculpture spans across the Bloomberg site as a three-part work. Water ebbs and flows over multiple layers of cast bronze, sculpted from branches and leaves. The artist was inspired by the ancient Walbrook river which wound through this site for hundreds of years. 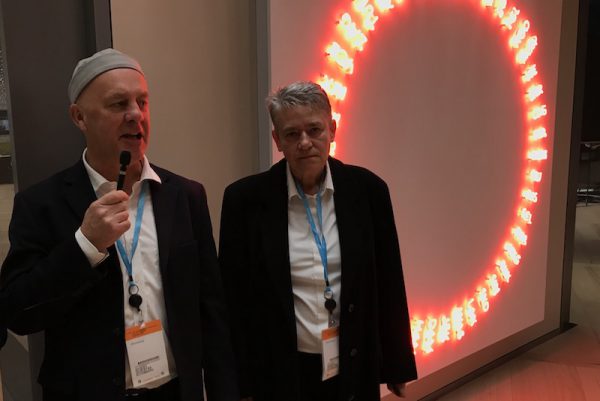 Ben Langlands & Nikki Bell, Frozen Sky Located on the 6th floor Frozen Sky functions as a constellation of the world’s urban centres. Its 45 three-letter acronyms are the codes used by air transport authorities to identify international destinations around the globe. As it moves through its circular sequence of neon and light, the work evokes travel and communication, space and time — suggesting the persistent transience of contemporary urban life. 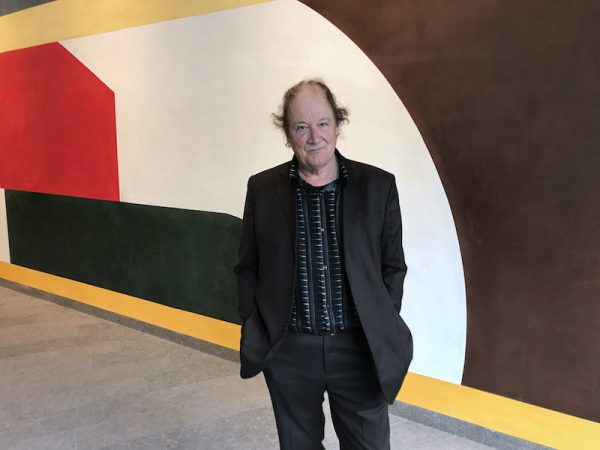 David Tremlett, City Drawing #1 Located in the south building reception hall and the elevator lobby.
The artist planned this monumental wall drawing to respond to the architectural conditions of the space — its volume, proportions and circulation. Working on site for several weeks, he and his assistants applied a range of coloured pastel crayons directly onto the walls, by hand. The geometric composition abstractly reflects on the architecture of the Bloomberg building, as well as the Roman ruins at its foundation. 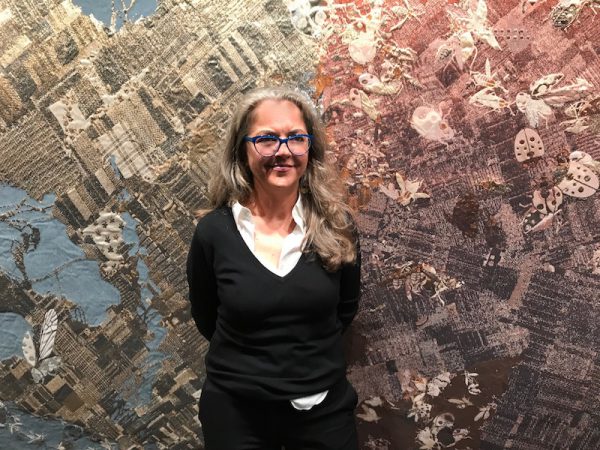 Located on the ground floor in the auditorium’s pre-function space.
The suite of three tapestries weaves together the artist’s fascination with historic textiles and the natural world. They are inspired in part by traditional textile “samplers” that would have been stitched by hand. Each tapestry is approximately 10 feet high and spans a width of approximately 40 feet. Together, the three tapestries envelop visitors as they enter the space. 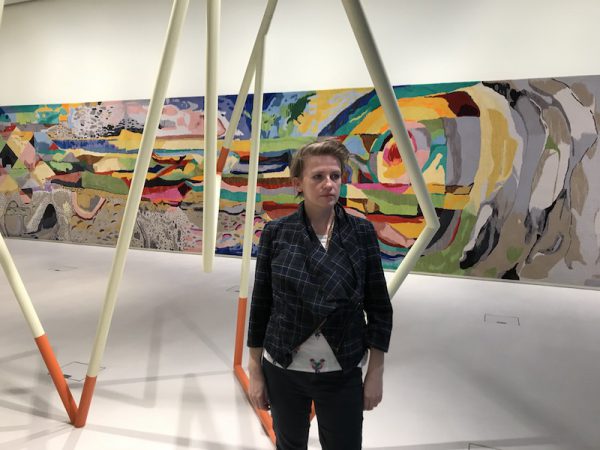 Isabel Nolan ‘Another View From Nowhere’

Bloomberg Space is taken over by Isabel Nolan with her ‘Another View from Nowhere’ which is based on a response to the history of the site. This is the very first Bloomberg commission in the new building.