High value bluechip contemporary art displayed at alternative venues is usually something that excites us here at Artlyst; however, we draw the line at the gentrification of sleazy Las Vegas casinos, as they seemingly take on the role of museum, in this vast gambling theme-park.

Las Vegas has never been comfortable just being Las Vegas

First, there was the Bellagio owned by Steve Wynn, who is notoriously known for putting his elbow through a $100m 1942 portrait of Marie-Theresa Walter, Picasso’s 21-year-old mistress. The hotel gallery is described on their website as, “Bellagio Gallery of Fine Art is Las Vegas’ premier exhibition space—where great art goes on vacation. BGFA is committed to presenting intimate exhibitions featuring works by some of the world’s most compelling artists. Organised in partnership with museums and foundations from around the world, past exhibitions have included “Picasso: Creatures and Creativity,” “Fabergé Revealed,” “Painting Women: Works from the Museum of Fine Arts, Boston,” “Warhol Out West,” “Figuratively Speaking: A Survey of the Human Form” and “Classic Contemporary: Lichtenstein, Warhol and Friends.” 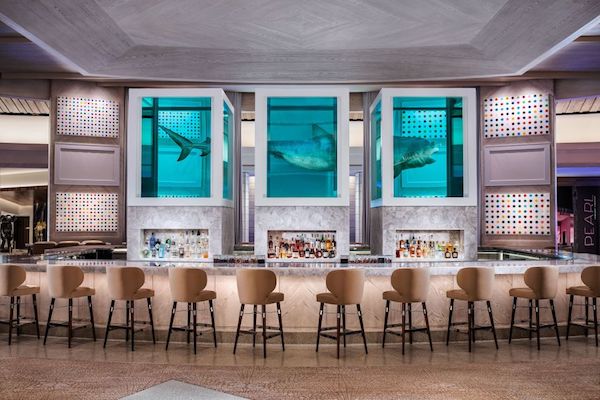 The latest to take on the persona of cultural respectability is the newly renovated Palms Casino Resort who have installed millions of dollars worth of bling art as an incentive to entice tourists inside this over decorated clip joint. The $620 million revamp of the casino was unveiled this week with eyebrow raising consequences for living artists, Christopher Wool, Richard Prince, Takashi Murakami and Damien Hirst and Dead artists Andy Warhol and Jean-Michel Basquiat. Works worth millions may give a clue that the odds are stacked against the punters if they can afford to decorate the walls with work that wouldn’t go amiss in a national modern art collection. Let us not forget Art is the largest unregulated market after narcotics.

The Unknown bar in the Palms has been fashioned around YBA artist Damien Hirst’s 1999 sculpture “The Unknown (Explored, Explained, Exploded)” This is a shark tank with a section of shark floating in each of the three tanks. (A similar piece, with just one shark in one tank, sold for $15,300,000 in 2008.) and if you were wondering what ever happened to Hirst’s kitsch Sun Disc relief sculpture, centrepiece in the ‘Treasures from the Wreck of the Unbelievable’ extravaganza, a collateral event at last year’s Venice Biennale, bingo! It’s on show in the resort’s High Limit Gaming Lounge. Hirst also designed the bar’s coasters, matchbooks and swizzle sticks, so sez the NY Post.

The casino was recently purchased by art collecting brothers Frank and Lorenzo Fertitas. “we thought we should give people a chance to see stuff that is more niche,” Curator Tal Cooperman who is inspired by ‘Street Art’ explained, “They taught me a lot about blue-chip art and now I’m bringing in ideas from the street.”

Las Vegas has never been comfortable just being Las Vegas. It has for many years masqueraded as a faux city of culture with a reproduction of the Eiffel Tower and Roman villas at Caesar’s Palace ‘better than the originals’. Now Contemporary Bling Art seems to be the next fad and with the announcement that Steve Wynn is to become an ‘Art Dealer’ I’m sure he’ll find plenty of takers for his stock, hey he may even be the new Larry Gagosian.