An Italian bomb squad swooped on the Golden Lion winning Lithuanian pavilion at the Venice Biennale yesterday after a group of British Journalists and artists complained to the authorities about a Russian man’s erratic behavior.

Authorities quickly cleared the area and closed the pavilion. The local newspaper La Nuova reported that several people in the queue claimed the man acted in a threatening way before flashing a device in his jacket and pressing a button suggesting he had a bomb. The venue at Campo de la Celestia was shut and over 100 people were told to vacate the area.

Artlyst journalist Sue Hubbard an eye-witness said; “A Suspicious bloke tried to push into the queue, then started ranting about ‘you Europeans’ – He was possibly referring to Eastern Europeans? Someone was worried he had some sort of device on him, he was reported and all went into lockdown”. 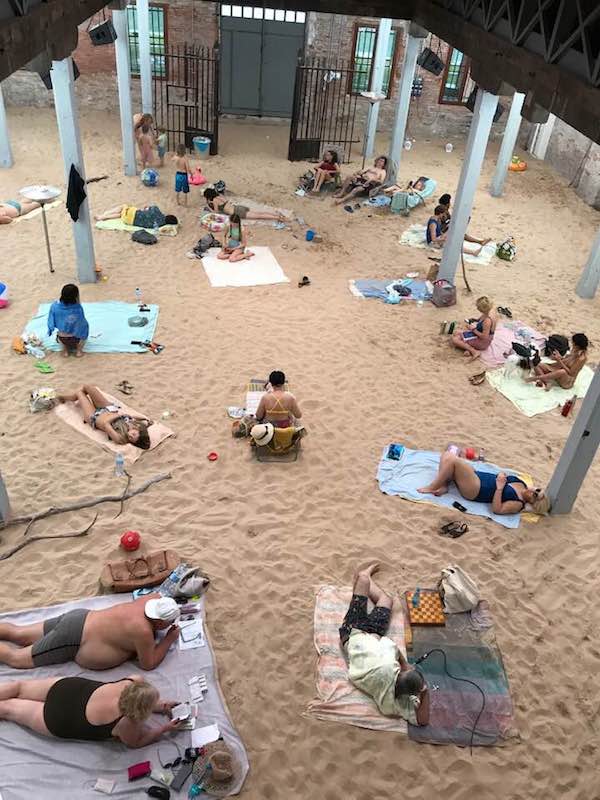 At 12.30pm military personnel padlocked the entrance gate to the pavilion site, located within military grounds, that have only been used for military purposes for the last 70 years. The Lithuanian Pavilion transforms the interior of a historic quayside building within the Marina Militare complex into an artificially lit beach scene replete with sand and all the paraphernalia associated with seaside holidays.

If this wasn’t bad enough, today the Biennial Commission has threatened the organisers of the Lithuanian pavilion with full closure after curators, and the artists decided to have the pavilion only open on Saturdays. They have also considered closing it completely. It has also been reported that the organisers are late with paying the rent for the venue hire. Not a good start for the winners of such a grand international prize.

About the Lithuanian Pavilion

In the unique setting of the Marina Militare, located adjacent to the Arsenale, Rugilė Barzdžiukaitė, Vaiva Grainytė and Lina Lapelytė have presented a durational opera performance, Sun & Sea (Marina). While initially appearing light-hearted, this highly innovative take on the operatic form – described as “counter-monumental” and “anti-baroque theatre” – addresses some of the most pressing ecological issues of our time. Presented by Nida Art Colony of Vilnius Academy of Arts, Sun & Sea (Marina) is curated by Lucia Pietroiusti, Curator of General Ecology and Live Programmes at the Serpentine Galleries, London.

With a bird’ s-eye view of the performance from a mezzanine gallery above the stage, audiences look down on the assembled characters who appear as a typical group of holiday-goers, of varying ages, from different walks of life, attired in colourful bathing suits and sunbathing under the full glare of the sun over a mosaic of towels. Surveying this fleshy tableau vivant from their sun-like vantage point, audiences observe the frailty of the human condition. As the libretto unfolds we are introduced to each individual in turn, through-sung performances (performed whilst lying down) that reveal private preoccupations, ranging from trivial concerns about sunburn and plans for future vacations to nagging fears of environmental catastrophe, which surface as though from the depths of the characters’ troubled consciousness. Frivolous micro-stories on this crowded beach give way to broader, more serious topics and grow into a global symphony, a universal human choir addressing planetary scale issues; tired bodies offering a metonym for a tired planet.

This is not the first collaboration for the three artists, who have known each other since teenage years growing up in Kaunas, the second largest city in Lithuania. Their contemporary opera Have a Good Day! – created between 2011 and 2013 and still touring the world – won six international awards in Europe. It has toured more than twenty festivals and was broadcast on BBC Radio 3 and the Lithuanian National Radio. In 2018 at the Golden Cross awards in Lithuania, the artists were awarded Borisas Dauguvietis prize for their innovative and original ideas. In their collaborations, the artists pay special attention to the relationship between documentary and fiction, reality and poetry as well as the overlap of theatre, music and visual arts. Themes that appear in Sun & Sea (Marina) have run through the artists’ works, such as Rugile Barzdžiukaitė’s award-winning film essay, Acid Forest, which replaced the human’s filmic viewpoint with that of birds, or in Have a Good Day!, an opera in which complex questions such as gender, ageing and labour were addressed through individual checkout counter workers’ songs, all offering an insight into their everyday lives and preoccupations.

This project marks the second time that Vilnius Academy of Art’s Nida Art Colony has produced Lithuanian Pavilion in Venice. In 2015, during the 56th International Art Exhibition of La Biennale di Venezia, the Colony presented Dainius Liškevičius’ project Museum. The head of Nida Art Colony, art critic Dr Rasa Antanavičiūtė, will serve as the Commissioner of the national pavilion together with Honorary Commissioner Jean-Baptiste Joly, founder of Akademie Schloss Solitude, where the development of Sun & Sea began in 2016. Sun & Sea (Marina) follows the Swamp Pavilion, the Lithuanian pavilion for the 2018 Venice Architecture Biennale, which also focused on environmental issues.