A new Botticelli painting has been discovered in an English Heritage property collection. For years it lay beneath yellowing varnish and it wasn’t until this was stripped away that the work was attributed to the Renaissance master’s studio.

Stylistically it was too similar to be an imitation – Rachel Turnbull, English Heritage

The work was thought to be a later copy of the Madonna of the Pomegranate, painted by Sandro Botticelli in 1487. The larger original, which is on display at the Uffizi Gallery in Florence is one of the artists best-known works. It is now thought to be the closest version of Botticelli’s 1487 masterpiece, which shows a melancholy Virgin Mary holding a baby Christ and a pomegranate, flanked by angels. 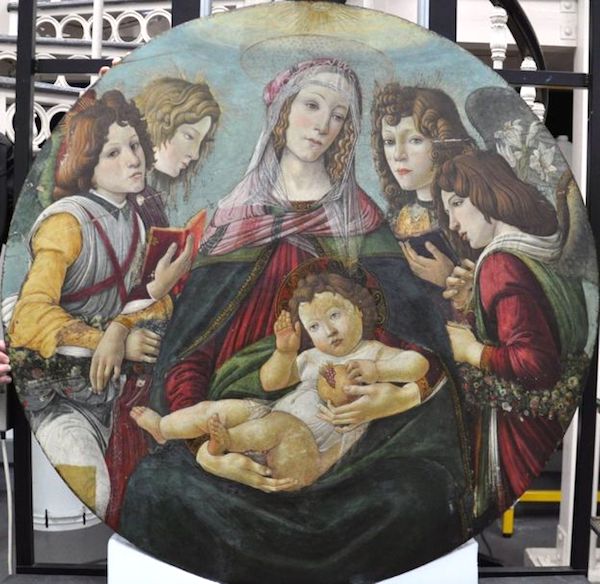 Conservators have now reattributed the work after undergoing xray and chemical technology leading to the painting’s reevaluation. It was bought by the diamond merchant Julius Wernher in 1897 and kept with his art collection at his villa in Greenwich.

English Heritage said it had consulted experts at the Victoria and Albert Museum and the National Gallery to confirm the painting’s origins. Rachel Turnbull, English Heritage’s senior collections conservator, said: “Stylistically it was too similar to be an imitation, it was of the right period, it was technically correct and it was painted on poplar, a material commonly used at the time.

“After removing the yellowing varnish, X-ray and infrared examination revealed under-drawing, including changes to the final composition uncommon in straight imitations.”

“Botticelli, like other contemporary Florentine painters, had an active studio which issued versions and adaptations, presumably at lower prices, of works that were popular,” according to Professor Paul Joannides, emeritus professor of art history at the University of Cambridge.

“It is only relatively recently, with more highly developed methods of technical examination, that the status of such pictures can be  at least to an extent determined.”