Charlie Schaffer has won the prestigious BP Portrait Award 2019. It was announced last night at the National Portrait Gallery, London. The painting titled ‘Imara in her Winter Coat’ is a portrait of the artist’s close friend.

The first prize portrait was selected from 2,538 submissions from 84 countries. The judges admired the mannerist style of this portrait, which has a strong sense of a living presence in Schaffer’s composition. The judges went on to say, ‘the skillful depiction of a combination of several different textures including faux-fur, hair and skin are revealed by prolonged looking, and together these produce an image that is traditional, but clearly contemporary.’

Presenter Sandi Toksvig awarded Charlie Schaffer with £35,000 and a commission, at the National Portrait Gallery Trustees’ discretion, worth £7,000 (agreed between the National Portrait Gallery and the artist). Born in London in 1992, Schaffer studied at Central Saint Martins and then the University of Brighton where he graduated in 2014 with a degree in Fine Art. This is the first time he has been selected for the BP Portrait Award exhibition. Schaffer’s practice is mainly concerned with the act of painting, and how the process that allows the painter and sitter to spend time with one another forms unique and intense relationships.

The artwork can be seen at the National Portrait Gallery from Thursday 13 June when the BP Portrait Award 2019 exhibition opens to the public. Admission to the show is free.

A second prize of £12,000 went to Norwegian painter, Carl-Martin Sandvold, for The Crown, a self-portrait in existential thought. The judges were particularly impressed by the assured handling of paint and keen observation, creating a portrait that had made a memorable impression, and lingered in mind. The third prize of £10,000 went to Italian artist, Massimiliano Pironti, for Quo Vadis?, a portrait of his maternal grandmother, Vincenza, a former miller and factory worker now aged ninety-five. The judges were captivated by the excellent depiction of the subject, in particular, the sitter’s hands in contrast with the surrounding textures including rubber, tiles, and curtains.

The BP Young Artist Award of £9,000 for the work of a selected entrant aged between 18 and 30 has been won by 30-year-old Brighton based artist Emma Hopkins for Sophie and Carla, a portrait that depicts the photographer Sophie Mayanne and her pet dog. The judges liked the way negative space had been used in the picture, and how the artist had refreshed the traditional depiction of the nude with a compelling mutual gaze between the artist and sitter.

The winner of the BP Travel Award 2019, an annual prize to enable artists to work in a different environment on a project related to portraiture, was Manu Kaur Saluja for her proposal to travel to the Golden Temple at Amritsar, India. Saluja intends to make portraits of the men and women from all walks of life who volunteer to work in the temple kitchens that operate year-round, providing meals to over 50,000 people free of charge, every day. The prize of £8,000 is open to applications from any of this year’s BP Portrait Award-exhibited artists, except the prize-winners.

Originally from London, Schaffer studied at Central Saint Martins before graduating with a degree in Fine Art from the University of Brighton in 2014. He has gone on to win the Brian Botting Prize ‘for an outstanding representation of the human figure’ three times.

Schaffer’s portrait Imara in her Winter Coat portrays Imara, an English Literature student he met after moving permanently to Brighton. Schaffer said: “She immediately struck me as someone who is uncompromisingly open and who wants to learn about anything and everything.” Sittings for the portrait took place over four months, with Imara posing in her warmest winter coat to withstand the studio’s cold conditions. Schaffer set out to paint only Imara’s face but subsequently added the coat after being inspired by Titian’s Portrait of Girolamo Fracastoro in the National Gallery, London, with its pyramidal composition and the subject’s similar attire. 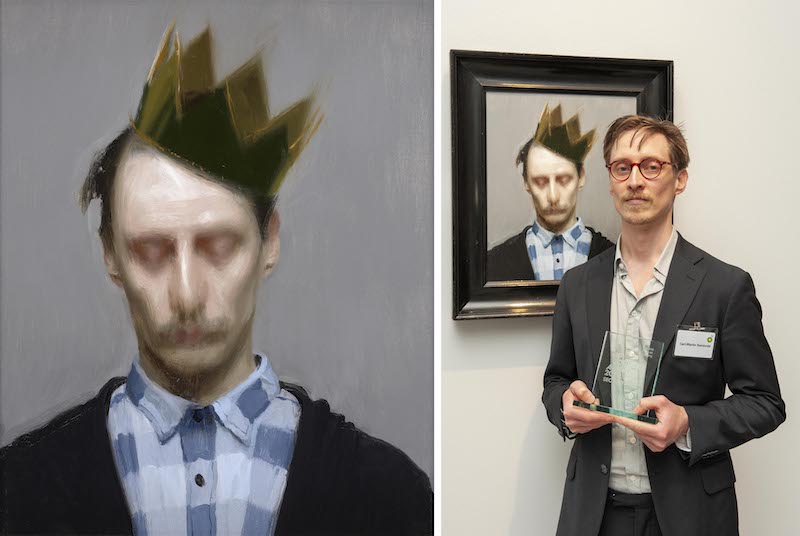 Carl-Martin Sandvold’s practice began on the streets of Oslo, where he made urban street art during his teenage years. Beginning his training in Norway, he continued his studies at the Florence Academy of Art and the Grand Central Academy of Art in New York, before returning to Florence for a stint at the Charles H. Cecil Studios. Currently, Sandvold’s studio is located on the site of Edvard Munch’s former estate on the outskirts of Oslo.

Sandvold’s self-portrait The Crown reflects his interest in ‘the challenges of life, the strangeness of being alive and other existential issues’. Central to Sandvold’s portraiture is the belief that we are all trying to reconcile the love of life with the knowledge of death, saying: “The crown symbolises the peak of power, achievement and material abundance. In this portrait, it suggests that none of these things really solve anything.” 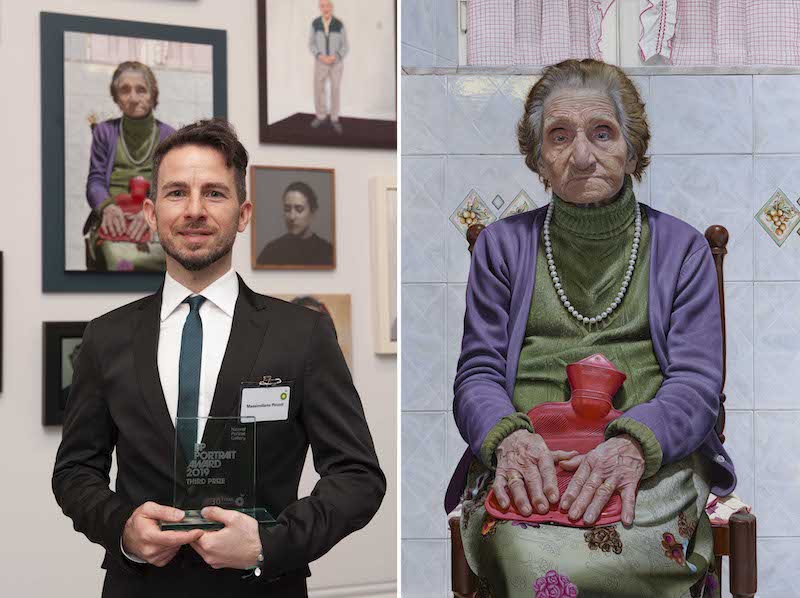 Massimiliano Pironti was born in Colleferro, a town south of Rome, Italy. Pironti taught himself oil painting as a teenager before attending an art school in Frosinone where he focused his attention on portraiture. The picture is not his sole occupation. At the age of sixteen, he began to dance professionally and is now well known in Italy for his performances in musical theatre, including Cats and Saturday Night Fever. Pironti currently lives in Germany where he has been appearing on stage in a long-running production of the Disney musical Tarzan.

Pironti’s portrait Quo Vadis? depicts his maternal grandmother, Vincenza, a former miller and factory worker now aged ninety-five. Pironti made sketches and took photographs in the kitchen of his grandmother’s home in the town of Gavignano, returning to his studio in Germany for the painting process. Pironti says: “My grandmother is an example of strength, dignity and authority. Every wrinkle tells her story, and I wanted to capture her image to freeze time. This portrait is essential to me. It touches emotional chords.” 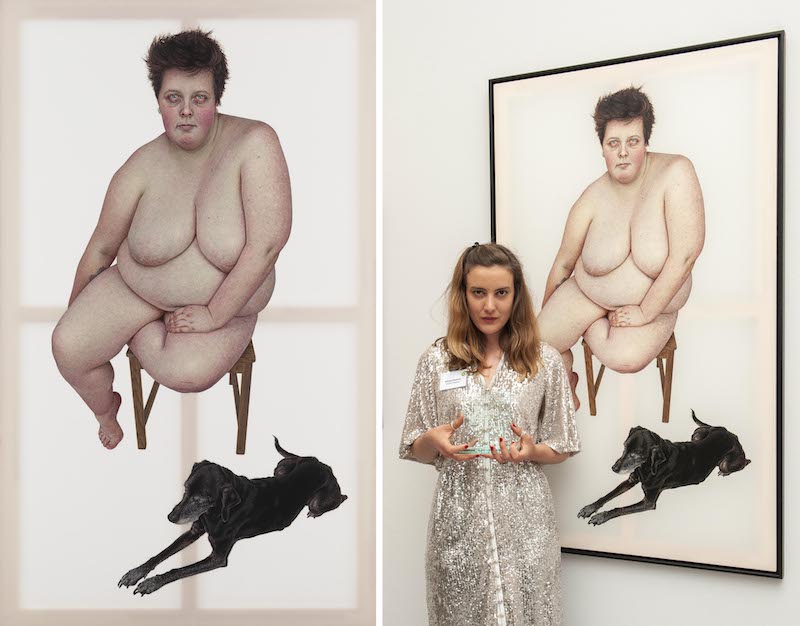 Emma Hopkins was born in Brighton in 1989 and turned to portrait painting after graduating with a degree in Make-up and Prosthetics for Performance from the University of the Arts, London. Self-taught, Hopkins first exhibited her work in a staff show at the Chelsea Arts Club while working behind the bar, now she is a member of the Royal Society of Portrait Painters. Hopkins’ expertise has fed directly into her painting, which focuses almost exclusively on nude portraits and studies of human flesh.

Hopkins’ portrait Sophie and Carla depict the photographer Sophie Mayanne and her pet dog Carla. Mayanne is known for Behind the Scars, a photography project about people’s scars and the stories behind them. It is an interest that Hopkins shares, she says: “I want to understand as much as I can about what it means to be human. We are not just the clothed person we present to the world. We are the mind and body that we inhabit.”

Dr Nicholas Cullinan, Chair of the Judges and Director of the National Portrait Gallery, London, says: ‘Many congratulations to all the artists in the exhibition and in particular to the prize winners. This has been another year of exceptional and inspiring entries to the BP Portrait Award, which represents the very best of a contemporary portrait painting by artists of all ages, and from all over the world. It is a privilege to chair the judging process, and I would like to thank all the artists who entered the 2019 competition. I hope visitors will enjoy the exciting range of styles and sitters in this year’s exhibition.’

Ms Des Violaris, Director of UK Arts and Culture BP, says: “The BP Portrait Award is one of the most important platforms for contemporary portraiture in the world. BP is one of the longest running supporters of UK arts and culture, and are proud to continue this legacy. We look forward to seeing the exhibition in London, and then Edinburgh and Belfast throughout the year. Congratulations to Charlie Schaffer and all of this year’s prize winners.”

2019 will mark the Portrait Award’s 40th year at the National Portrait Gallery and 30th year of sponsorship by BP. The BP Portrait Award, one of the most critical platforms for portrait painters, has a first prize of £35,000, making it one of the largest for any global art competition. This highly successful annual event is aimed at encouraging artists over the age of eighteen to focus upon, and develop, the theme of portraiture in their work. The BP Portrait Award 2019 exhibition will run at the National Portrait Gallery, London, from Thursday 13 June to Sunday 20 October 2019.

To enter, artists were invited to upload a photograph of their finished painting to the BP Portrait Award website, which was considered by the judges in the first round of the competition. 290 entrants were successful in this round and invited to hand-deliver or courier their work to a venue in London for the second round of judging. From these 44 works were selected for the BP Portrait Award 2019 exhibition.

Shortlisted artists are invited to apply for the BP Travel Award 2019, an annual award of £8,000, which allows artists to experience working in a different environment on a project related to portraiture. The resulting portraits are shown in the following year’s exhibition. The winner of the BP Travel Award 2019 is announced at the award ceremony on Monday 10 June 2019.

The winner of the BP Travel Award 2018 was Robert Seidel for his proposal to travel along the route of the river Danube by train, boat and bike to connect with people and make portraits in the regions through which the river passes. The resulting work will be displayed alongside the BP Portrait Award 2019 exhibition.