The Brexit Party has appropriated an image of Antony Gormley’s Angel Of The North in a party political broadcast. This is a clear misuse of an image that was created as a symbol of hope.

The party explains on YouTube that; “The Brexit Party’s latest Party Political Broadcast (aired in the UK on September 26, 2019) uses techniques never seen before in a British political broadcast. It poses the question ‘Why hasn’t Brexit happened?’ and puts the case for a Clean-Break Brexit.” 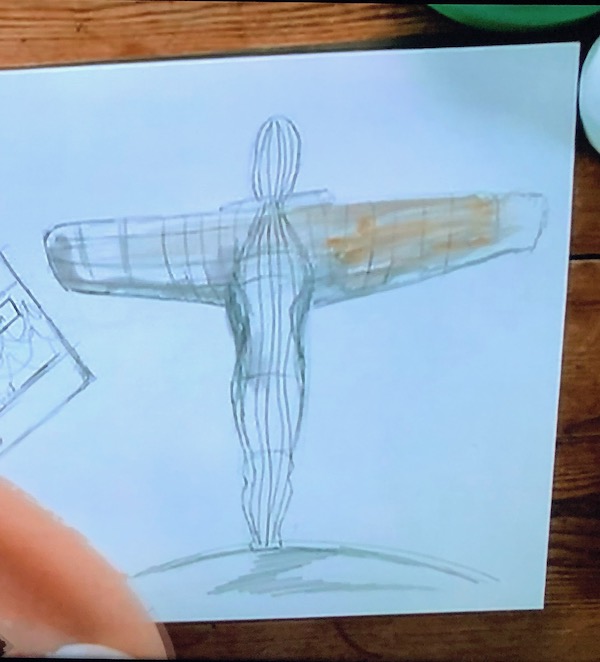 Angel of the North image from PPB by the Brexit Party

The actual advert looks very much like the ‘Take On Me Video’ by pop band Ah-Ha from the 1980s. It is neither original nor interesting with its xenophobic tone and message.

It also states; “Boris’ deal would be Mrs. May’s betrayal with a new haircut”. So now we know Mr Farage is festering in far-right rhetoric. What else is new!

Perhaps the Turner Prize-winning Mr Gormley, who currently has a major show of his work on display at the Royal Academy in London, should follow in Anish Kapoor’s footsteps and stand up to the far right. Kapoor took the NRA (National Rifle Assoc) to court and made sure the ad was taken down for reasons of copyright infringement.

Sir Anish Kapoor won his battle to remove footage of his iconic Cloud Gate sculpture in Chicago used by the National Rifle Assoc.  NRA) in a propaganda video.

In December 2018 Kapoor stated, ​” We are pleased to declare victory over the NRA. They have now complied with our demand to remove the unauthorised image of my sculpture Cloud Gate from their abhorrent video “The Violence of Lies”, which seeks to promote fear, hostility and division in American society.” He added, “Their bullying and intimidation has not succeeded.”

“This is a victory not just in defence of the copyright of my work, but it is also a declaration that we stand with those who oppose gun violence in America and elsewhere. The NRA will not be allowed to use art in support of their propaganda. Their toxic video called for the “clenched fist of truth”. We in our turn call for the clenched fist of resistance, solidarity and humanity.

“I invite the NRA to do the honourable thing and donate $1million to the victims of gun violence in America through charities such as Every Town for Gun Safety, The Coalition to Stop Gun Violence, Giffords, The Brady Campaign and Moms Demand Action for Gun Sense in America.”

This is an excellent opportunity to stand up to the far right, Mr Gormley.