The British Museum has acquired an important painting by the English painter, poet and Pre-Raphaelite Brotherhood founder, Dante Gabriel Rossetti (1828-1882). The artwork – called The Death of Breuze Sans Pitié – has rarely been exhibited since it was created in 1857. Its location was unknown for much of the 20th century as much of this work fell into obscurity. It goes on display in the British Museum on Today (3 September 2019), the first time it has been seen in public in 26 years.

The painting was one of seven created by Rossetti for his friend, the celebrated 19th-century designer William Morris

Morris later sold them all (five eventually went to the Tate collection in 1916), but the whereabouts of this particular painting became unknown sometimes after a 1926 auction in New York. No photo of the work existed at the time, and a written description of 1899 was all that was known about what the work depicted. The painting was eventually rediscovered when it came up for auction at Christie’s in 1993 and went on display briefly ahead of the sale. 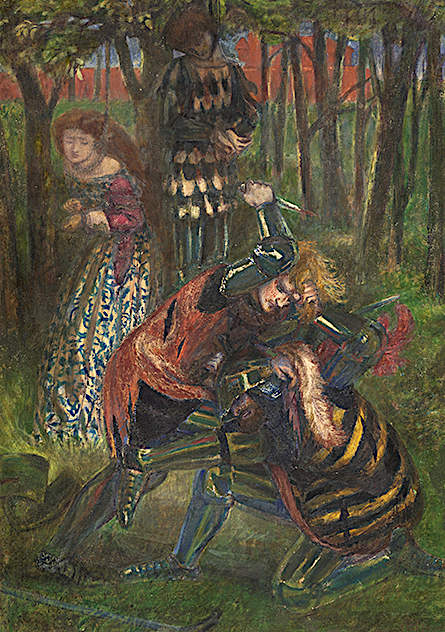 A quarter of a century later, the painting now enters a public collection for the first time. It is the star piece of a 900-stong collection of artworks recently allocated to the British Museum through the Arts Council’s Acceptance in Lieu scheme, which was collected by the late art historian and foremost authority on late Victorian painting, John Christian. Highlights from this collection – including the Rossetti – are shown in the display John Christian: collecting the last Romantics which opens on Tuesday.

This Rossetti work is a vast departure from the style he became associated with. Known as being a Romantic painter, who often created sensual depictions of females, beauty and desire, this work shows male aggression, violence and death. A rare description of it is in an 1899 book by HC Marillier, called it “one of the crudest and least successful of all Rossetti’s water-colours” and that the composition was “grotesque and strained”.

Susannah Walker, curator of John Christian: collecting the last Romantics at the British Museum, said: “It is quite different from what we’ve come to expect from Rossetti. It is not immediate, but it is an object which grows on you. We’re delighted to have this, and 900 other works from the John Christian collection come to the British Museum. It is a major acquisition offering tremendous insight into Victorian art.”

John Christian: collecting the last Romantics opens on Tuesday 3 September and runs until Tuesday 12 November 2019 in Room 90a at the British Museum. Admission is free.