The University of Oklahoma which had agreed on terms and thought a lawsuit over ownership of a painting by Camille Pissarro was closed has been surprised to learn that the case is again in dispute.Leona Meyer the French, heir to the family who originally owned the Pissarro painting “Shepherdess Bringing in the Sheep” 1886 before the Nazis stole it had agreed to donate the artwork jointly to the Oklahoma Museum and the Musee d’Orsay.

She is now threatened with a multi-million-dollar lawsuit in a US court if she continues the legal battle to return the picture. “Mrs Meyer is not doing this for money. She is doing this in memory of her father who owned the painting. She does no,t want to hang it in her living room, she wants to give it exclusivly to the Musée d’Orsay,” Roexclusivelyher lawyer, told the Guardian.

Under ethical provisions honoured by museums in the United States and around the world, curators and staff promised to make clear the origins of artwork, “if credible evidence of unlawful appropriation without subsequent restitution is discovered.” 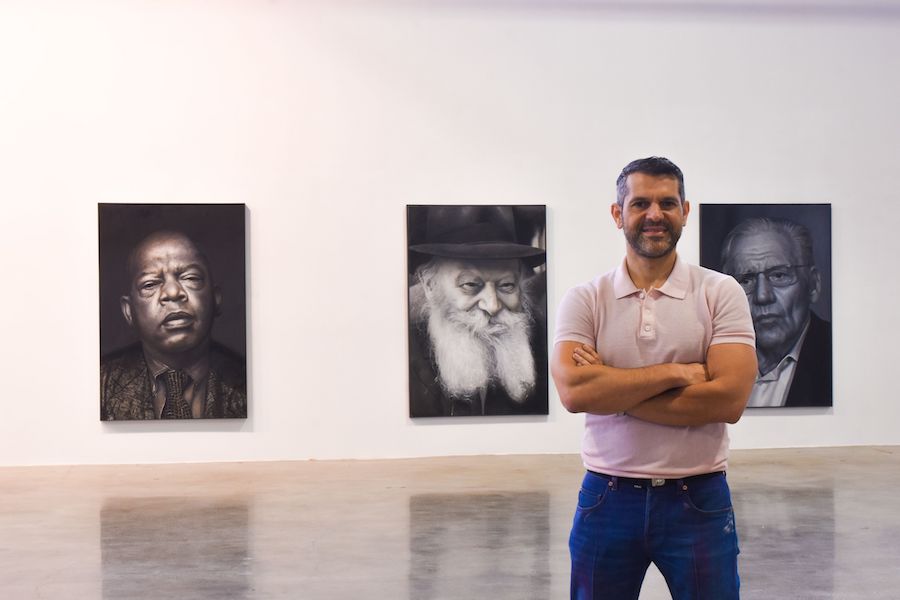 The Modern Art Museum MAM Shanghai has announced Shai Baitel as its inaugural Artistic Director. The newly opened state of the art museum located at the heart of Shanghai’s cultural mile along the Huangpu River is a premier institution for contemporary art with a global and multidisciplinary approach.

The beautifully renovated and redesigned coal bunker is the largest contemporary art museum in Shanghai, measuring over 7,000 square meters. It sits at the heart of the dynamic MAM Shanghai Riverbank cultural zone, stretching 1.2 kilometers along the Huangpu River just south of the Pudong Central Business District. MAM Riverbank boasts not only the museum, but an outdoor sculpture park, and fine dining restaurant MESS.

Shai Baitel is a freelance curator and creative director with extensive experience in the fields of arts, culture, and business in the United States and abroad. He starts as the inaugural Artistic Director of the Modern Art Museum (MAM) Shanghai this year, after originating its 2019 exhibition “Bob Dylan: Retrospectrum” as an external curator and advisor to the museum. Dylan’s exhibition – the first retrospective of Bob Dylan’s visual artworks in the world – was the most comprehensive presentation of his creative life of visual art to date, bringing over 150,000 visitors to MAM Shanghai.

Modern Art Museum(MAM) in Shanghai, China, is an institution focused on diversity, equality, nurturing creativity and education, by pursuing its core value “Art’s Happening”. An institution with a global and multidisciplinary approach, MAM Shanghai aims at contributing to the education, knowledge and enjoyment of art through an immersive and engaging experience. Its vast industrial architecture offers a versatile and dynamic space to connect the shared cultures of the East and West. Located along the ‘cultural corridor’ of museums and galleries that runs along the riverside in the Pudong New Area, MAM utilises innovative methods to facilitate public participation and engagement with art. 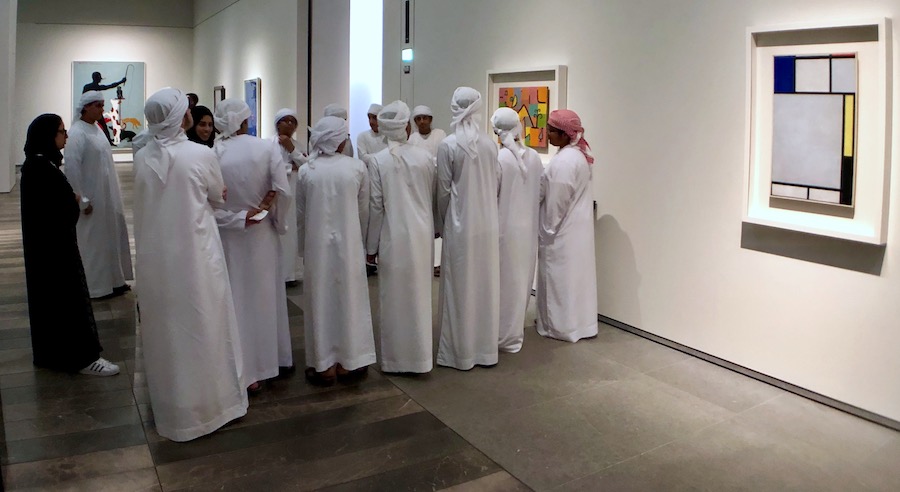 The Louvre Abu Dhabi opens its third season with Abstraction and Calligraphy – Towards a Universal Language (17 February – 12 June 2021). In keeping with the third season’s theme of exchanges between East and West, this international exhibition marks the second major collaboration with the Centre Pompidou, Charting sites of mutual inspiration worldwide, and dedicated to artistic practices of abstraction. The show explores how 20th-century artists established a new visual language by merging text and image, inspired by the earliest forms of mark-making and, particularly, calligraphy. The exhibition brings together 101 masterworks on loan from 16 partner institution collections, alongside seven works from Louvre Abu Dhabi’s permanent collection. Two monumental artworks by contemporary artists whose current-day practices bring recurring themes of the exhibition to life.

Organised in four themed sections, the exhibition will investigate the timeline of abstraction as a new visual language established by artists in the early 20th century. By highlighting the rich cultural exchange taking place at that time, visitors will discover how the abstract movements were inspired by a plethora of signs and symbols, philosophies, and artistic techniques from cultures and societies far from European and American capitals. Artists including Paul Klee, André Masson, Vassily Kandinsky, Cy Twombly, Lee Krasner, and Jackson Pollock sought a new universal language that enabled them to express their emotions in response to a rapidly changing society, breaking away from figurative conventions. The show will also focus on how these same influences informed the practices of artists from the region – from Dia Azzawi and Anwar Jalal Shemza to Ghada Amer, Shirazeh Houshiary, and Mona Hatoum. The exhibition will be completed with installations from two contemporary artists, eL Seed and Sanki King, exploring how artists today are still seeking new visual forms to respond to current societal changes.

“It is with pride and great excitement that we welcome the opening of the first Louvre Abu Dhabi international exhibition of 2021, especially as masterworks from so many illustrious lending partners will be on show here at Louvre Abu Dhabi, and in the region, for the very first time,” remarked HE Mohamed Khalifa Al Mubarak, Chairman of the Department of Culture and Tourism-Abu Dhabi.

“Museums, with their ability to inspire curiosity, discovery and learning, are essential to every society, and we hold them in particular regard here in Abu Dhabi. It has become more apparent than ever the increasingly important role that art and culture play in our lives, providing wonder, intellectual stimulation and comfort, as well as a sense of connection to others in our communities and far beyond. What is also clear, and what was a primary message of the Reframing Museums symposium in November, is that trust and solidarity between countries and between arts institutions are what will ensure a vibrant future for a collaborative, international cultural sector.”

Curator of the exhibition, Didier Ottinger, Deputy Director, Cultural Programming, MNAM-CC, commented, “Exchanges and dialogue characterise the project I developed for Louvre Abu Dhabi—dialogues between spaces and times that are embraced by the Universal Museum; dialogue between images and letters, illustrated by the mutual fascination between calligraphy and image-makers, and vice-versa; dialogue in the space between the artists of East and West, dialogues that bring together an ancient Egyptian stele and the ‘pictograms’ of a New York street artist—the shared dream of a universal language.”

The first section of the show will focus on pictograms, symbolic figurative images that represented words and ideas in writing in ancient civilisations in Mesopotamia and Egypt. Work presented will include a painting by Swiss-German artist Paul Klee, who – inspired by his travels to Tunisia – created artwork that combined elements of images and letters stemming from his fascination with Egyptian hieroglyphics. His work influenced artists such as Joaquín Torres-García from Spain, Iraqi artist Dia Al-Azzawi and Pakistani artist Anwar Jalal Shemza. This section will also include works from American artist Adolph Gottlieb, inspired by images from Native American art. French artist André Masson, who was inspired by 17th-century Indian figurative inscriptions and Arabic calligraphy.

In line with the history of writing, the second section will focus on signs, which, by their very form, can express universal ideas. Works on show will include studies of signs by Russian artist Vassily Kandinsky, considered by many to be one of the inventors of abstract art. As an act of resistance to the Western world ravaged by war, many artists turned to Japan and China for inspiration. The signs traced in works by French-Hungarian painter Judit Reigl and German-French painter Hans Hartung echo symbols used by Chinese and Japanese calligraphers. The show will furthermore include works from French artists Georges Mathieu, who tried to develop a lyric and rapid gesture, and Julius Bissier, who was influenced by the Chinese philosophy of Taoism. Finally, Mona Hatoum’s works endeavour to create a new alphabet of signs through found objects.

The third section will be devoted to lineaments, revealing how Western artists appropriated the energy of Eastern calligraphy in their brushstrokes to produce free and fluid lines. In opposition to Western artistic inclination, the Surrealist movement invented a drawing technique called Automatism, using automatic movements to express the subconscious. It allowed them to artistically respond to a tumultuous interwar period between World War I and World War II. On display will be works by Surrealist André Masson as well as works by Jackson Pollock, Philip Guston, and Willem de Kooning, who were all influenced by Masson. Visitors will be able to see Jean Dubuffet’s primitive creations, inspired by a combination of graffiti, rock paintings and children’s drawings. Also on show will be Cy Twombly’s gestural drawings for curtains of the Opéra de Paris and Lee Krasner’s works, which take their inspiration from Kufic script from the Iraqi City of Kufa, the birthplace of Arabic calligraphy.

The exhibition will conclude with a section showing how both Western and Eastern artists incorporated calligraphy into their practice, such as Spanish artist Joan Miró, who referenced how closely painting and poetry are linked in the East. Following in his footsteps, the poets Brion Gysin, Henri Michaux and Christian Dotremont pursued the same path by painting poetry, inspired by their trips to North Africa, China and Lapland, respectively. Henri Matisse’s studies for his illustrated book Jazz, which he called “arabesques” in a tribute to Arabic writing, are also included here. Viewers will also discover how regional artists, including Shakir Hassan Al Said and Sliman Mansour, sought to free calligraphy from its purely linguistic function. This section will be completed by two original monumental artworks from contemporary artists—French-Tunisian artist eL Seed and Pakistani artist Sanki King.

Louvre Abu Dhabi is open Tuesday – Sunday from 10 am – 6:30 pm; closed on Mondays. Pre-purchased tickets are required to visit the museum. E-tickets can be reserved via the museum’s website.