Carolee Schneemann (born in Fox Chase, Pennsylvania, 1939, lives and works in the Hudson Valley, New York) has been one of the most important figures in the development of performance and Body Art. She is a pioneer of feminist performance of the early 1960s. She has used her own body as the prevalent material of her art. In so doing, she situates women as both the creator and an active part of the creation itself. In opposition to traditional representation of women merely as nude object, she has used the naked body as a primal, archaic force which could unify energies. Her style is direct, sexual, liberating and autobiographical.

She champions the importance of women’s sensual pleasure and she examines the possibilities of political and personal emancipation from predominant social and aesthetic conventions. Through the exploration of a large range of media, such as painting, filmmaking, video art and performance, Schneemann re-writes her personal history of art, refusing the idea of an “his-tory” narrated exclusively from the male point of view.

The acknowledgement will be awarded to Carolee Schneemann on Saturday, May 13th, 2017 at Ca’ Giustinian, the headquarters of La Biennale di Venezia, during the awards ceremony and inauguration of the 57th Exhibition, which will open to the public at 10:00 a.m. on that same day.

Emerging in the early 1960s world of experimental film, music, poetry, dance and Happenings, Carolee Schneemann’s work is characterized by experiments in kinetic technologies, as well as research into archaic visual morphologies, pleasure wrested from suppressive taboos and the body of the artist depicted in dynamic relationship with the social body. Using a vivid range of materials and sources, she has incorporated painting, drawing, performance, video and installation in her work. Schneemann has transformed the definition of art, especially in regard to the body, sexuality and gender.

Even if she is especially renowned for her performances, Schneemann describes herself as a painter and she considers her artistic process as having extended her painterly principles off the canvas. Since the 1950s, while studying at Bard College and then at Columbia University, she figures in the pictorial space, introducing objects into the canvas and creating assemblages that developed out of the paintings. Her landmark work Eye Body (1963) marks her transition from painting to working with a much wider range of media, such as filmmaking, video art and performance, as well as her role as both image and image-maker. 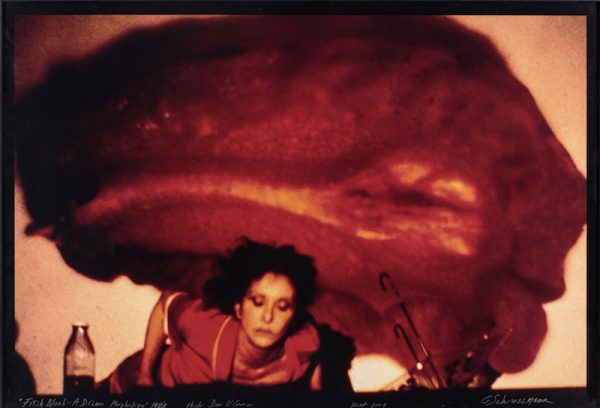 Interior Scroll, 1975, a performance in which Schneemann, standing nude, draws a scroll from her vagina, is an iconic piece of feminist body art, encapsulating the sexual, political, and aesthetic concerns of the movement. In Up to and Including her Limits, 1973-1976, Schneemann translated gesture into performance, using her suspended body as a mark-making tool, addressing the male-dominated history of Abstract Expressionism and action painting.

Schneemann’s work has consistently contrasted imagery of daily intimacies and the sacred erotic with destruction and war. The atrocities of the Vietnam War dominated the motives of her films and performances in the 1960s, including her film Viet-flakes (1965) and the multimedia kinetic performance Snows (1967). Through video installation, photography and painting, Schneemann explores the invasion and devastation of Lebanon in the 1980s, the collapse of the World Trade Center on 9/11 and a range of other personal and public disasters. What unites each of these works is not just a visual motive – representation of the atrocities of war – but also the deeply personal, even intimate, nature of Schneemann’s eulogies and laments.

Schneemann’s challenging of social boundaries persevered in Vulva’s Morphia, 1992-97, consisting of texts, photos, drawings of prehistorical sculptural representation of vulvas. In the installation text, a vulva’s personification discovers that she is subject to numerous prejudices: for example, from a pure biological point of view it is just an “amalgam of proteins and hormones”.

Later works of the 1990s and the 2000s, such as Mortal Coils (1995) and Vespers Pool (2000) are centred on symbolic and figurative representations of death, moving between conscious and unconscious worlds. They insist on the function of art objects as mystical channels into the death realm.