The Tenth Anniversary Taylor Wessing Photographic Portrait Prize 2017 has been won by César Dezfuli for his portrait of a migrant rescued in the Mediterranean Sea off the Libyan coast, the National Portrait Gallery has announced. The £15,000 award was presented to the Spanish photographer at an awards ceremony on Tuesday 14 November 2017.

‘The portrait powerfully conveys his loss, solitude and determination.’

His sitter Amadou Sumaila, a sixteen-year-old from Mali, was photographed in the Mediterranean Sea, in international Waters 20 nautical miles off the Libyan coast. He has since been transferred from a rescue vessel to a temporary reception centre for migrants in Italy. The portrait was taken as part of Dezfuli’s work as a freelancer, documenting the search and rescue of migrants on board an NGO vessel in the Central Mediterranean Route. Dezfuli, who was born in Madrid of Persian descent (10.01.1991), works as journalist and documentary photographer and focuses on issues of migration, identity and human rights.

‘I think Amadou’s portrait stands out because of the emotions it transmits,’ says Dezfuli. ‘He had just been rescued by a European vessel, apparently fulfilling his dream. However, his look and his attitude show fear, mistrust and uncertainty, as well as determination and strength.’

Judges’ comments: ‘Against the balance and precision of Dezfuli’s composition, the directness of Sumaila’s gaze is striking and unsettling. The portrait powerfully conveys his loss, solitude and determination.’

The winner of the £3,000 Second Prize is Abbie Trayler-Smith for her photograph of a girl fleeing ISIS in Mosul, Iraq. Trayler-Smith was there undertaking a commission for Oxfam documenting the camp where the charity was providing aid, talking to women who had lived under ISIS who were prepared to be photographed.

The winner of the £2,000 Third Prize and the John Kobal New Work Award for a photographer under 35, is Maija Tammi from Finland for her portrait of a Japanese android called Erica. This is the first time in the competition’s history that one of the photographers shortlisted for a prize has also won the John Kobal New Work Award which offers a cash prize of £5,000 to include undertaking a commission to photograph a sitter for the Gallery’s Collection.

The winning portraits will be on display at the National Portrait Gallery as part of the Taylor Wessing Photographic Portrait Prize 2017 exhibition from 16 November 2016 to 8 February 2017. While the photographs are judged anonymously from prints, this was the first year in which the competition permitted digital entries for the initial sift.

The prize-winning photographs and those selected for inclusion in the exhibition were chosen from 5,717 submissions entered by 2,423 photographers from 66 countries.

£3,000 Second Prize: Abbie Trayler-Smith for Fleeing Mosul from the series Women in War: Life After ISIS 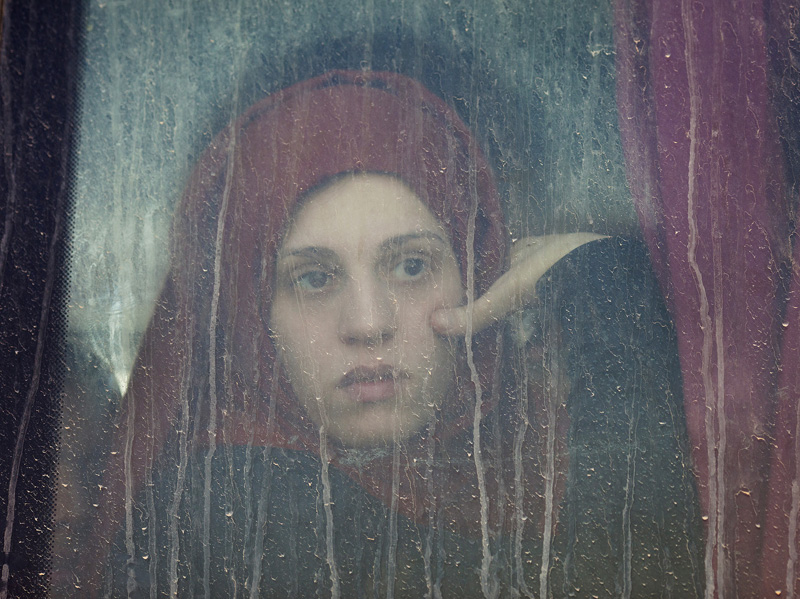 Abbie Trayler-Smith (20.05.1977) is a documentary and portrait photographer born and raised in South Wales. Travelling extensively her work covers women’s rights, social development and the aftermath of conflict. Her shortlisted photograph was shot outside Hasan Sham IDP camp in Northern Iraq. Trayler-Smith was there undertaking a commission for Oxfam documenting the camp where the charity was providing aid, talking to women who had lived under ISIS who were prepared to be photographed. A convoy of buses arrived from Mosul, bringing people to safety who had escaped the battle just hours before. ‘I just remember seeing her face looking out at the camp,’ says Trayler-Smith,’ and the shock and the bewilderment in her’s and other’s faces and it made me shudder to imagine what living under ISIS had been like. To me, the uncertainty in her face echoes the faces of people having to flee their homes around the world and references a global feeling of insecurity.’

Judges’ comments: ‘The colour and texture of the portrait has a painterly quality, created by the mud-streaked glass through which the young woman is framed. Her haunting expression quietly suggests the unimaginable horrors of life under occupation.’ 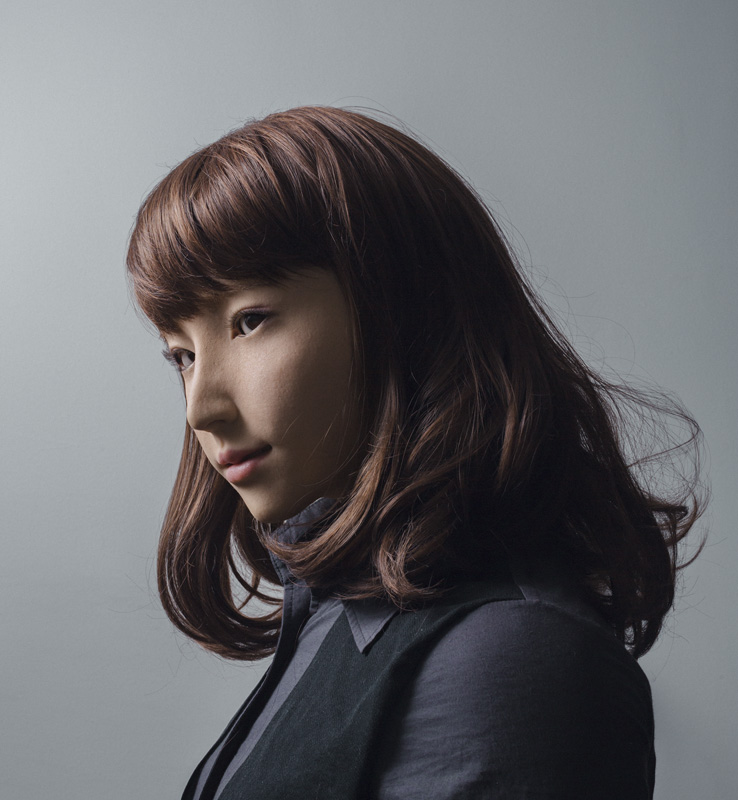 One of Them Is a Human #1 by Maija Tammi (Erica: Erato Ishiguro Symbiotic Human-Robot Interaction Project) © Maija Tammi

The winner of the Third Prize and the £5,000 John Kobal New Work Award is Maija Tammi (05.06.1985) a Finnish artist, with a background in photojournalism, whose photographs engage with science and aesthetics. Tammi’s work has been exhibited in Europe, North America and Asia. She regularly works with scientists and is currently finishing her studio-art-based doctoral thesis. Tammi’s sitter is Erica, a highly advanced robot, programmed by her creator, Hiroshi Ishiguro, to understand and respond to a range of questions and can express different emotions via dozens of pneumatic actuators embedded beneath her silicone skin. One of Them Is a Human #1 is part of a broader series which presents androids alongside one human and asks questions about what it means to be alive. The photograph was taken at Ishiguro Laboratory, Department of Systems Innovation at Osaka University, in an experiment room where researchers work with Erica. ‘I had half an hour with Erica and a young researcher in which to take the photograph. The researcher told me that Erica had said she finds Pokemon Go scarier than artificial intelligence.’

Judges’ comments: ‘During the judging process, only the title of each portrait is revealed. It was unclear whether the girl was a human or an android, and this ambiguity made the portrait particularly compelling. Tammi’s portrait offers a provocative comment on human evolution.’

The John Kobal New Work Award is given to a photographer under thirty-five whose work has been selected for the Taylor Wessing Photographic Portrait Prize exhibition. The winner receives a cash prize of £5,000 to include undertaking a commission to photograph a sitter connected with the UK film industry for the Gallery’s Collection.

The annual Taylor Wessing Photographic Portrait Prize exhibition is one of the most prestigious photography awards in the world and showcases new work that has been submitted by some of the most exciting contemporary photographers. Since the international competition began in 1993, it has remained a hugely important platform for portrait photographers and offers an unparalleled opportunity for celebrated professionals, emerging artists and amateurs alike. The competition is in its tenth year of sponsorship by Taylor Wessing.

The competition judges have no knowledge of the identity of the entrants, and the diversity of styles in the exhibition reflects the international mix of entries as well as photographers’ individual and varied approaches to the genre of portraiture. For the third time, photographers were encouraged to submit works as a series in addition to stand-alone portraits, and there was no minimum size requirement for prints. For the second year running, the rules also allow photographers to submit photographs on different supports to the competition – to encourage the demonstration of a range of different photographic processes.

Dr Nicholas Cullinan, Director, National Portrait Gallery, says: ‘Many congratulations to all the prize-winners and selected photographers for their remarkable portraits. I hope that visitors to this tenth anniversary Taylor Wessing Photographic Portrait Prize will enjoy this exhibition of the very best contemporary photography from around the world.’

Tim Eyles, Managing Partner, Taylor Wessing LLP, says: ’Our huge congratulations to everyone shortlisted in this exceptional exhibition, and most especially to the winners. As a law firm, we believe strongly in the importance of creativity in bringing solutions to our clients’ business challenges. Encouraging creativity in all of us is at the heart of our philosophy, and what better way than through immersion in the arts. We are privileged to be able to support the Gallery and this remarkably talented community of artists and look forward to doing so for many years to come.’

The exhibition also features an In Focus display of previously unseen prints from a new body of work by the photographer, Todd Hido, who is known for juxtaposing mysterious and cinematic ruminations on the American landscape alongside portraits of women, which together speak of a fragmented and personal memory of the past. Hido will be the third In Focus artist, selected by National Portrait Gallery curators, following Cristina de Middel in 2016 and Pieter Hugo in 2015. In Focus is an annual showcase for new work by an internationally renowned photographers.