This is an extraordinary exhibition by a talented artist who has long been championed in international circles. Charlotte Salomon was born to a middle-class family in Berlin in 1917. She died in Auschwitz 1943 age 26. Salomon attended the art academy in Berlin despite it being closed to Jews during the Nazi era. She left a body of some 700 works which were donated to Amsterdam’s Jewish Historical Museum in 1971.

“In the condition of terrorised vulnerability and politically menaced radicalised identity… Salomon contemplated taking her own life… Instead, however, she created one of the most challenging, enigmatic and demanding artworks of the twentieth century” – Griseldaby Pollock.

The complicated masterpiece Life? or Theatre? is a major exhibition featuring over 230 works created while the artist was In hiding in the South of France. Gouaches from her outstanding work, Life? or Theatre? represents a burst of creative activity in the early 1940s. Fifty of the works currently on show at the Jewish Museum London have never previously been exhibited in the UK. The last major UK show of her work was at the Royal Academy of Arts, twenty years ago, after the work resurfaced in the early 1960s. 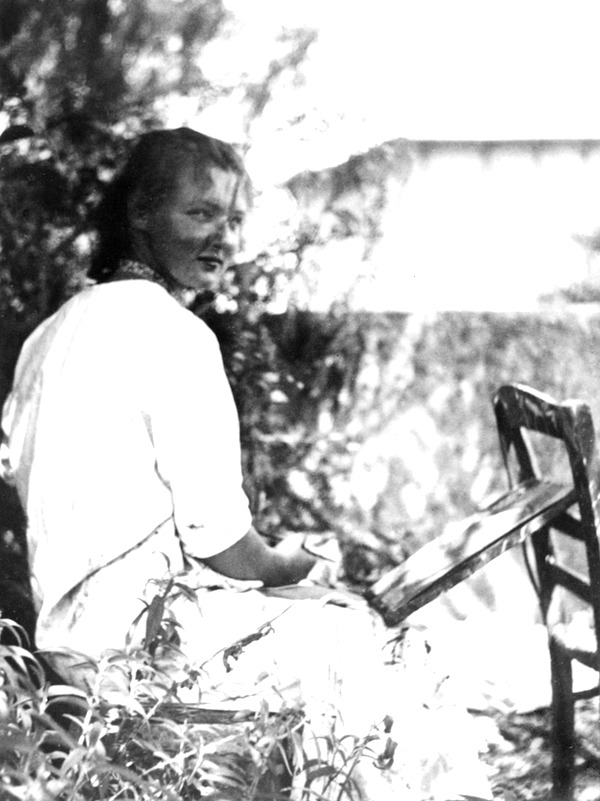 Life? or Theatre? combines creative force with personal narrative. Divided into three sections, the remarkable gouaches unveil a vivid self-portrait spanning across all facets of Salomon’s existence: from a complicated family life, marked by the suicides of nearly all female relatives; growing up in Berlin, her training at the art academy in Berlin (one of a tiny number of Jewish students admitted), her close relation to singing teacher Alfred Wolfsohn; the rise of the Nazis; to her exile to France. Throughout, the artist challenges the destructive forces of these external events as well as the gendered traumas of the domestic everyday by deploying playful pseudonyms and fantastical elements alongside emotional candour, remarkable observation, and a meticulous visual memory. The work has extraordinary emotional depth, with joy, hope and determination surfacing alongside the pain, confusion and sadness of abusive and difficult family life, failed love affairs and political machinations affecting her and her family. 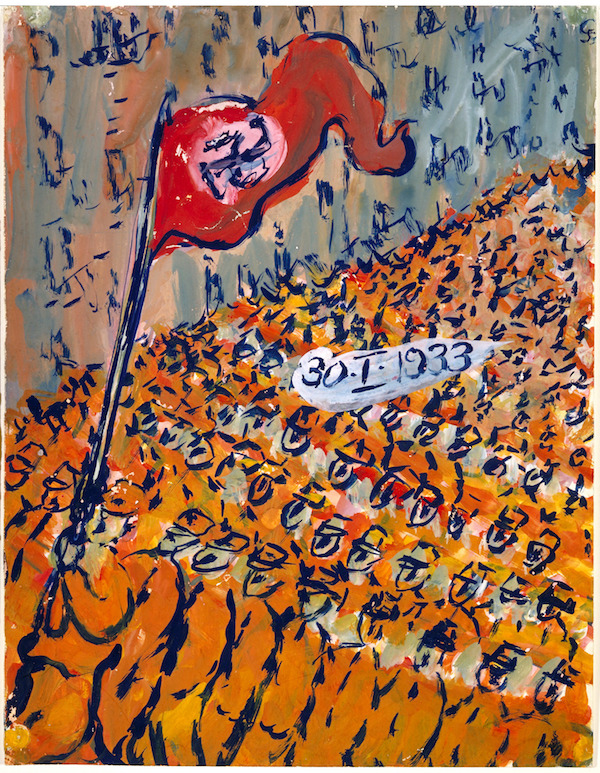 In its entirety, Charlotte Salomon’s Life or Theatre? comprises over 700 gouaches, divided into a prelude, main section, and an epilogue with distinct acts and scenes; it reads like a storyboard for a film, complete with musical citations. The work is painted with primary colours (red, yellow and blue) and white, and mixing them to create vivid hues, the images incorporate “characters” of important and influential individuals in the artist’s Life. As the narrative unfolds, the work becomes looser and more visceral.

236 gouaches – reflecting the entirety of the work – with accompanying text ‘captions’ in the form of wall graphics are on display. There are also a couple of short films and interactive media units, offering insight and understanding of the artwork is a combination of text, moving image, and audio.

Salomon’s Life’s work unfailingly arouses intense reactions, and it has inspired artists, filmmakers, writers and choreographers to make creations of their own. “It was summer. There were trees and sky and sea. I saw nothing else: only colours, paintbrush and you, and this. People, everyone, became too much for me. I had to go further into solitude, completely away from all humanity. Then maybe I could find what I had to find – namely myself: a name for me + this is how I began Life and Theatre”.’ Charlotte Salomon.

Dominik Czechowski, Head of Exhibitions at Jewish Museum London says, “We’re proud to present this body of work by an extraordinary modern female artist who pioneered a practice of honest, even confessional, artistic self-expression and self-creation. Plagued by personal tragedy before her Life was cut short in Auschwitz, the themes of Salomon’s work remain compelling and resonant with urgent contemporary issues of oppression, mental health, Jewish identity, and unstable political environments. We’re privileged to be presenting 50 of these powerful paintings for the first time in the UK.” 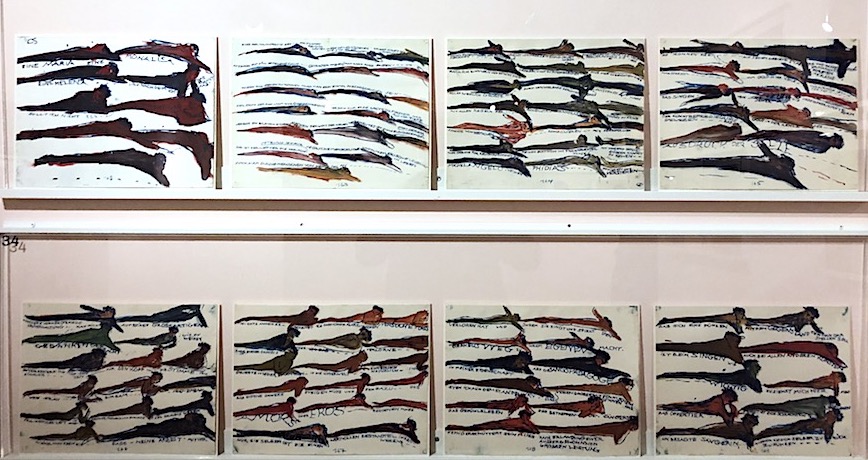 Marked both by personal tragedy and external political events the remarkable combination of image, text, and music, reveals Salomon’s wealth of references to cinema, opera, Berlin cabaret, and shows the painter’s self-consciously deployed modernist engagements with diverse artists such as Michelangelo, Van Gogh, Edward Munch, and Käthe Kollwitz. Additionally, affinities can be drawn between Salomon’s work and that of others who shared her experience of statelessness and menaced exile in Nazi-dominated Europe, including Hannah Arendt, Sigmund Freud, and Walter Benjamin. Without comparison, Charlotte Salomon’s paintings are a triumph of personal truth and individual expression – an unrivalled opus magnum from a talented and ambitious artist, dark with her early death, but luminous with her precision, her lyricism, and her courage.
:
The exhibition Charlotte Salomon: Life? or Theatre? has been organised in cooperation with the Amsterdam Jewish Historical Museum. Charlotte Salomon was born in Berlin in 1917. Her mother died by suicide when Charlotte was eight, but this was not revealed to the artist until later in 1938, she thought her mother had died of influenza. There were previous family suicides — her aunt and grandmother – also revealed to the artist in later Life, before she created this influential work. Salomon trained in illustration at the art academy in Berlin. She specialised in illustrating Märchen, German fairy tales and folk tales.

In 1938 she fled Germany alone. She joined her grandparents in exile in the south of France There her grandmother jumped to death from a window in 1940, the same year Salomon and her grandfather were interned by the French authorities in a concentration camp in the Pyrenees. Salomon married Alexander Nagler, a fellow refugee, while in France.

In the chaotic conditions after the German invasion of France, Salomon and her grandfather were released from the camp in Gurs and went into hiding between late 1940 and early 1942. Salomon made the huge multi-layered artwork that is Life? or Theatre? in a hotel paid for by her an American patron – allowing the artist the space to reflect and make the work in relative isolation. In a letter of Salomon’s, long kept secret by her family and only emerging publicly in 2015, it was alleged that she aided her grandfather’s death by overdose in February 1943. That same year, she was rearrested and deported to Auschwitz, where she was murdered five months pregnant and aged 26.

Charlotte Salomon: Life? or Theatre? Charlotte Salomon addressed her work Life? or Theatre? to her patron, Ottilie Moore, and gave it to her family doctor, Dr Moridis, for safekeeping. Moridis kept it hidden until after the war, and when Moore returned to France, it was finally given to her. Moore then gave the work to Charlotte’s father and stepmother, who in 1971 donated the work to Amsterdam’s Jewish Historical Museum. Since then, the Jewish Historical Museum in Amsterdam has arranged exhibitions worldwide.