If you do like to be beside the seaside in summer, then there’s much to be said for making the south coast combination of three architecturally award-winning spaces into an attractive day trip: Pallant House, Chichester, which opened its extension in 2006; the Towner Gallery in Eastbourne, basking in the splendour of a completely new building opened last year; and the 1930’s modernist classic de la Warr Pavilion in Bexhill, sparkling afresh following an extensive make-over finished in 2005. What’s more, their current exhibitions are well worth seeing. And a new gallery is currently under construction on the historic seafront in Hastings 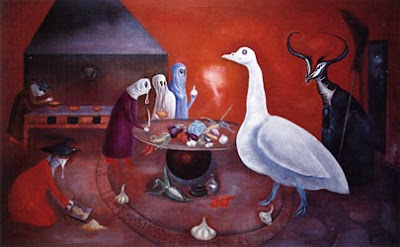 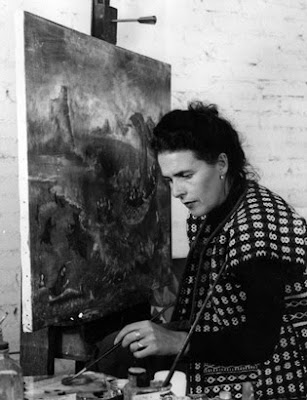 Pallant House’s innovative and impressively-conceived show makes extensive presentations of the work of three women, displaced by World War II, who became ‘surreal friends’ in Mexico: Spanish painter Remedios Varo (1908-63) and Hungarian photographer Kati Horna (1912-2000) – neither much-seen in Britain before – plus English painter Leonora Carrington. The latter is probably better-known here for her venturesome life, kick-started by becoming Max Ernst’s lover in 1937, than for her art – but is widely celebrated in Mexico, where she lives on at 93. Overall, the combination of paintings, relevant photographs and lively biographical details makes for a fascinating exhibition. I wasn’t, however, persuaded that Carrington’s work demands that her European reputation rise to its South American level: it’s good to see her paintings en masse in the flesh, but many of them struck me as curiously inert in their potentially attractive fusion of Piero della Francesca and Bosch. 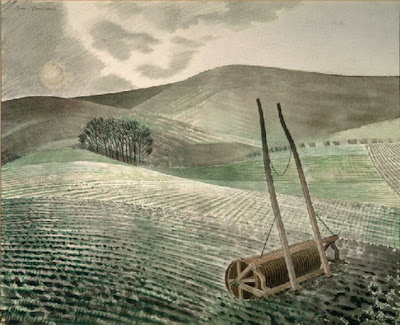 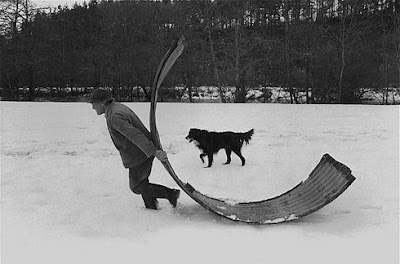 The Towner Gallery, Eastbourne – 50 minutes from Chichester by train

The Towner also features a historically interesting combination: paintings of Sussex by Eric Ravilious (1903-42) and photographs of farming communities in Devon taken in the 1970-80s by his son, James (1939-99). This works well in that both deal with man in the landscape, but where James does so directly by capturing characterful rural personalities and their working practices, his father usually did so indirectly by omitting people in favour of their machines and the marks – such as fences – they left on the land. The Towner also has the advantage that their local hero Eric, who grew up in Eastbourne and returned to teach there from 1925-32) is the most significant of the artists at these three south coast venues. The gallery’s own substantial collection is complemented by loans, and there is quite a lot here which wasn’t in the Imperial War Museum’s centenary celebration in 2003. 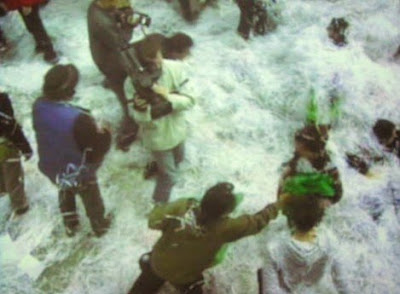 Still from ‘Without Parade’ 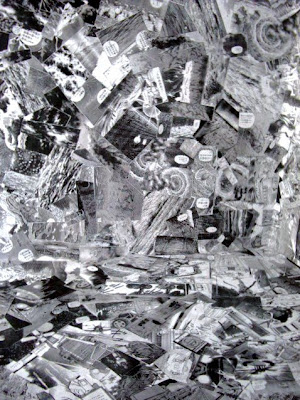 Detail inside the hut of ‘Paper Work @ the Seaside’

Mendelsohn and Chermayeff’s classic 1930’s pavilion hosts – yes, him again – 60 casts of Antony Gormley on the roof; and a twenty year retrospective of Tomoko Takahashi. The Anglo-Japanese artist is known for teeming installations of objects which exploit how their functions ‘can get out and turn into something else’, as she put it to me. What she shares with Ravilious, I think, is an unusually heightened sense of pictorial rhythm, albeit with contrasting means: through the carefully anarchic arrangement of items rather than through a pulsingly intricate dry brush watercolour technique. What’s more, Takahashi’s range is wider than you might imagine, with collages, storyboards, games, a computerised piss-take of word processing systems, a smile-making film of a large scale tickertape event without the excuse of a parade, a manga hut, and a shed from the world of white among her hugely enjoyable works by the sea.