Christian Marclay is one of the most important artists of his generation. The internationally celebrated 24-hour video installation The Clock will now go on display at Tate Modern for the first time since the gallery purchased the piece, from White Cube from the 14 September 2018 to 20 January 2019. The public will be invited to experience the work for free during gallery opening hours, as well as at additional 24-hour screenings.

The Clock experience is a vast range of narratives, settings and moods

Captivating audiences across the world since its debut in 2010, The Clock is a thrilling and poignant montage of thousands of film and television clips that depict clocks or reference time. Following several years of rigorous and painstaking research and production, Marclay edited these excerpts to create an immersive visual and sonic experience. This landmark work operates as a gripping journey through cinematic history as well as a functioning timepiece. The installation is synchronised to local time wherever it is on display, transforming artificial ‘cinematic time’ into a sensation of real time inside the gallery. 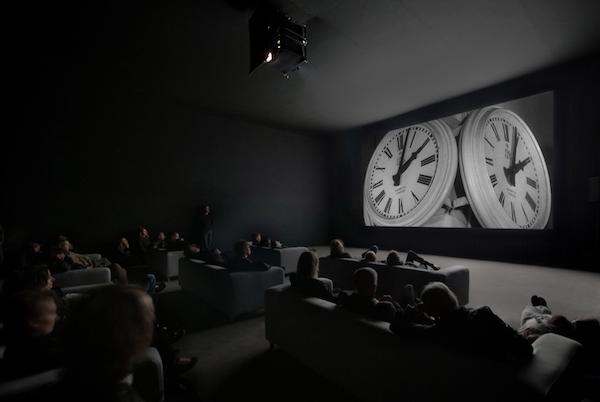 Combining clips spanning 100 years of well-known and obscure films, including thrillers, westerns and science fiction, audiences watching The Clock experience a vast range of narratives, settings and moods within the space of a few minutes, allowing time to unravel in countless directions at once.

Christian Marclay is recognised as one of the foremost contemporary artists working in sound and image. He received the prestigious Golden Lion Award at the Venice Biennale in 2011 when The Clock was shown. Tate jointly acquired this celebrated video work in 2012 together with the Centre Pompidou, Paris and The Israel Museum, Jerusalem. After touring internationally, this will be the first time Tate has shown The Clock since it joined the Tate collection. The work will be displayed in Tate Modern’s Blavatnik Building which since opening in 2016 has created flexible exhibition space to show large immersive video installations.

Born in San Raphael, California, based in London and New York, Christian Marclay (born 1955) first came to prominence in the underground music scenes of late 1970s Boston and New York, where he developed a unique mode of music and performance using altered vinyl records. Renowned as a seminal figure in the development of DJ culture and ‘turntablism,’ Marclay has subsequently developed a major international career spanning aural and visual collage and performance, sculptural objects, video and photography. His fascination with all aspects of popular recorded sound and cinema has led to sophisticated sampling and appropriation techniques in which obsolete cultural forms are given renewed life through new media.

Leading film theorist Erika Balsom will join Christian Marclay to discuss the work and his wider practice at a talk in Tate Modern’s Starr Cinema on 24 September 2018. The Uniqlo Tate Late on 28 September 2018 will take inspiration from The Clock with an after-hours mix of art, music, film, drop-in workshops and pop-up talks focusing on the audio-visual arts and sampled sounds. The Clock will also serve as a starting point for an experimental creative writing course at Tate Modern addressing ideas of time, repetition and everyday life. Additional related events and details of the free 24-hour screenings during the exhibition will be made available online closer to the time.