Update: Metakovan, the founder of ‘crypto-exclusive fund’ Metapurse, has been identified as the buyer of Beeple’s $69.3m. NFTDigital art has an established history dating back to the 1960s. But the ease of duplication traditionally made it near-impossible to assign provenance and value to the medium.

On March 11, 2021, Christie’s concluded its single lot online sale of Beeple’s Everydays: The First 5000 Days, achieving $69,346,250 and setting the third-highest price a living artist at auction in a watershed moment in the development of digital art. The sale of the first purely digital NFT based work of art by a major auction house achieved a new world record for any piece of digital art, the highest price for any lot in any online-only auction, the highest price for any winning bid placed online, and the highest total for an online-only auction.

The recent introduction of Non-fungible tokens (NFTs) and blockchain technology has enabled collectors and artists alike to verify digital artworks’ rightful owner and authenticity. EVERYDAY: THE FIRST 5000 DAYS will be delivered directly from Beeple to the buyer, accompanied by a unique NFT encrypted with the artist’s unforgeable signature and uniquely identified on the blockchain. MakersPlace, a digital marketplace, has issued the NFT for the piece.

On 1 May 2007, Mike Winkelmann, aka the digital artist Beeple, posted a new work of art online. He did the same thing the next day and the next, and the next one after that, creating and posting a brand-new digital picture, or ‘everyday as he called it, every single day for 13-and-a-half years. Those individual pieces have been brought together every day: THE FIRST 5000 DAYS, unique work in digital art history.

Minted exclusively for Christie’s, the monumental digital collage was offered as a single lot sale concurrently with First Open and realised $69,346,250. Marking two industry firsts, Christie’s is the first major auction house to provide a purely digital work with a unique NFT (Non-fungible token) — virtually a guarantee of its authenticity — and to accept cryptocurrency, in this case, Ether, in addition to standard forms of payment for the singular lot.

‘Christie’s had never offered a new media artwork of this scale or importance before,’ says Noah Davis, a specialist in Post-War & Contemporary Art at Christie’s in New York. ‘Acquiring Beeple’s work is a unique opportunity to own an entry in the blockchain itself created by one of the world’s leading digital artists.’ 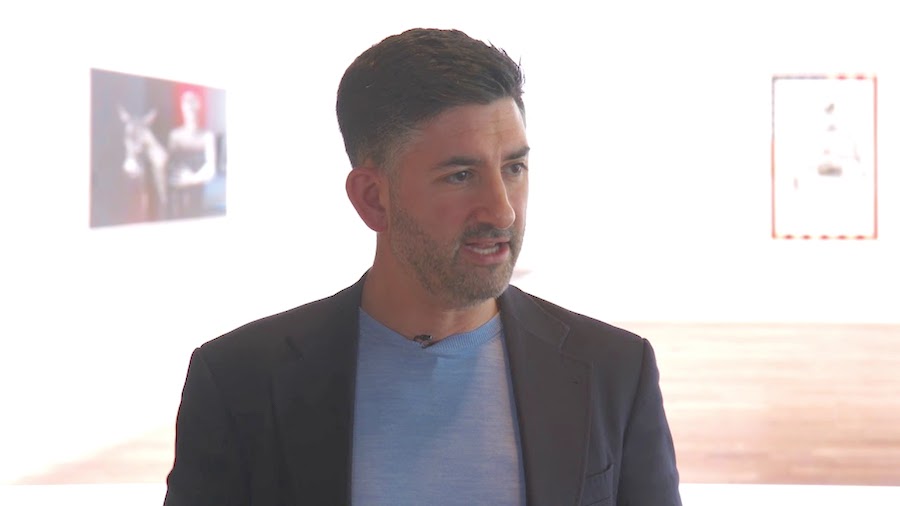 Mark Godfrey, Tate Modern’s highly regarded Senior Curator, is to leave his post at the gallery following his suspension for speaking publically about the Philip Guston exhibition’s postponement. The exhibition was to take place last Autumn.

Godfrey made the announcement on Instagram saying that he was working out his final weeks. A Tate spokesperson said Godfrey was departing as part of a voluntary layoff program that the museum introduced last December. As a result, of COVID pandemic-related revenue losses, Tate said it would reduce staff by 12 per cent, cutting around 120 full-time jobs. Godfrey has taken up an offer open to all staff at the institution.

Godfrey’s suspension was further inflamed when a staff member told a leading art publication that Tate had “little tolerance for dissents” in “an increasingly autocratic managerial style.” At the gallery.

Cindy Sherman, widely recognised as one of the most important and influential artists of her generation, is to be represented worldwide by Hauser & Wirth. Sherman has since the late 1970s made powerful images of an ever-evolving panoply of adopted personae to explore critical identity issues their construction and to question assumptions about artistic representation. Throughout her four-decade career, she has created works that challenge, in particular, the contradictory depictions of women that shape our culture’s expectations and support its stereotypes. Her inventive and physically demanding work has unfolded in discrete series, each engaging and upending familiar strains of visual history that range from Renaissance and Classical portraiture to the unlimited supply of images provided by movies, television, magazines, and the Internet.

Working alone to create narrative but enigmatic, open-ended tableaux that transform both her physique and surroundings, Sherman assumes multiple roles: photographer, model, makeup artist, hairdresser, stylist, and wardrobe master. But she never obscures the fictive, constructed nature of her images. By permitting the viewer access to the artifice—the simultaneous theatricality and strange familiarity—of her work, Sherman has radically expanded the boundaries of art by incorporating aspects of photography, painting, sculpture, film, installation, performance, collage, and assemblage into an uncanny visual language that ultimately occupies a category of its own.