Christie’s Auctioneers Continues to Lead In All Key Categories

Guillaume Cerutti, Chief Executive Officer, Christie’s commented: “2017 has been a year to remember for Christie’s, both for its record growth of 26% and some unforgettable moments, notably the sale of Leonardo’s Salvator Mundi in New York, and also because of decisive action we have taken to prepare for the future. In 2018, we will focus on continuing to expand our global client base and improving services to our customers, especially online. 2018 Spring sales are promising, especially with the prospect of the sale of the Rockefeller collection Christie’s has been entrusted with, and we are therefore looking forward to the year ahead with confidence.”

The continued growth in the Asian client base underpinned an increase in buying from the region (up 39%) to represent 31% of global spend. Asian client spend increased at the higher price levels (works over £1 million), rising 63%. 52% of the spend of the Asian client base was outside the Asian Art sales category, both in online and traditional auction sales. Buyers from Asia in online sales rose by 23%, driven by purchases of Asian Art and Luxury goods. There were 15 Asian art sales held online last year, including the ‘Art of China’ series, which averaged a 92% sell-through rate by lot and the value of Asian Art sold online increased by 32%.

In Spring 2017, Christie’s opened a new flagship space in Los Angeles hosting multiple exhibitions during the year. In New York, an increase of 68% in auction sales (62% in $), reflects the world record sale of Salvator Mundi by Leonardo da Vinci. Additional successes included the record-breaking sale of the Fujita Museum Collection in March which totalled $262.8 million (£215.3 million), the highest single- owner collection result of the year. Other major highlights were Constantin Brancusi’s La muse endormie ($57,367,500, a world auction record for the artist), Vincent van Gogh’s Laboureur dans un champ ($81,312,500), Fernand Léger’s Contraste de formes ($70,062,500, a world auction record for the artist) and Cy Twombly’s Leda and the Swan ($52,887,500). American buyers accounted for 32% of global spend, having spent 22% more at auction at Christie’s than in 2016.

European and Middle Eastern clients spent 52% more at auction at Christie’s than in 2016, representing 37% of client spend globally. London King Street auction sales were up 23% (18% in $), with a significant increase in new buyers, up 33% on 2016. Highlights of the year include the record breaking sale of Max Beckmann’s Hölle der Vögel (Birds’ Hell), which sold for £36,005,000 in June. The October sales held during Frieze week were highlighted by Jean-Michel Basquiat’s Red Skull (1982), which sold for £16,546,250. The Post-War and Contemporary Art evening sale achieved £134,076,500, the highest figure for an evening sale in the category in Europe. The fashion crowd gathered for the September pre- sale exhibition of the Collection of Audrey Hepburn, and launching the new Christie’s Lates access program, a public after-hours events initiative in London and New York.

The Paris saleroom increased auction sales by 49% (44% in $), having embraced a diversity of categories, led by a series of significant private collections. The first was held in March when works by Giacometti from the Hubert de Givenchy collection were 100% sold. In September, the two-day sale of the Alberto Pinto collection of almost 1,000 lots across categories, totalled more than treble its pre-sale estimate. During FIAC week in October Alberto Giacometti’s Grand Femme II realised €24,907,500 in the Avant-Garde sale, the most expensive work of art sold in France in 2017. The Prat collection closed FIAC week, with Jean-Michel Basquiat’s painting Jim Crow realising €15,007,500. Sales in Geneva in November totalled CHF144,007,100, attracting over 4,600 visitors to view lots including the Art of de Grisogono, the largest flawless D-colour diamond ever to come to auction, which set a new world auction record when it realised CHF33,500,000, and the 7th edition of Only Watch charity sale, which was 100% sold and raised CHF10,776,500.

Sell through rates by lot online averaged 82%, up from 77% in 2016. This platform continues to be the largest entry point for new buyers to Christie’s (37%), with the value of lots in online sales averaging $7,305 (up from $6,047 in 2016). The ratio of buyers and bidders to lots offered for online sales is double that of offline auctions.

The top online lot for 2017 was a Rolex Submariner 6538 which sold for $324,500 in October and the top lot sold via Christie’s LIVETM (online bidding in auction sales) was Alexander Calder’s Sans Titre, which realised $1,568,972 during the Paris Avant-Garde sale in October. The highest grossing sale online this year was the First Open Picture sale in July in New York which totalled $3,833,375.

12 million unique visitors came to Christies.com in 2017, and those who visited the website and the app came from over 190 countries. New innovations included the launch of augmented reality allowing enhanced viewing of leading lots. Compelling content and social media programmes have increased visitors to the website, with the editorial team generating over 800 stories. Continued investment in Instagram led to a 200% rise in engagement with Facebook Likes up 29%, encouraged by more regular Facebook Lives of our ‘Lates’, Sales and Specialist Tours around the saleroom. Our live-stream direct from our sale of Leonardo’s Salvator Mundi from New York, in November, reached over 470,000 people. 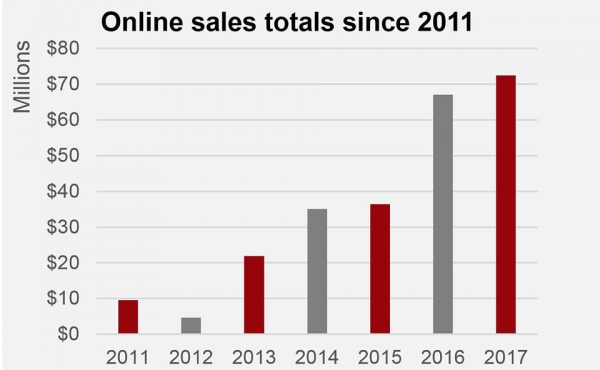 During the first half of 2018, the personal collection of Peggy and David Rockefeller will be touring globally, with exhibitions including London (21 February-8 March), Beijing (6-7 April), Los Angeles (6-12 April) and Shanghai (10-11 April). The tour and exhibitions are sponsored by VistaJet and a special collection preview issue of Christie’s magazine is now on sale.

20th Century Art Week at Christie’s King Street in February will include Abstraction Beyond Borders, a collection of works tracing Abstraction across Europe in the 20th Century, with artists including Georges Braque, František Kupka, Francis Picabia, Kurt Schwitters And Georges Vantongerloo. Also in February Christie’s New York will offer the JF Chen Collection of over 300 lots spanning Asian art, decorative objects, and contemporary design. During Drawing Week in Paris in March, Christie’s will offer the collection of art historian, art critic and previous President of the Academy of Fine Arts, Count Arnauld Doria. Asian Art Week in New York in March will include the final auction of a three-part sale series from an important private Japanese collection, The Classic Age of Chinese Ceramics: The Linyushanren Collection, Part III.