In 1961, three years after they met in Paris, Christo and Jeanne-Claude began creating works of art in public spaces. One of their projects was to wrap a public building. When he arrived in Paris, Christo rented a small room near the Arc de Triomphe and had been attracted by the monument ever since. In 1962, he made a photomontage of the Arc de Triomphe wrapped, seen from the Avenue Foch and, in 1988, a collage. Sixty years later, the project was realised. Christo and Jeanne-Claude have always made clear that their artworks in progress be continued after their deaths. Per Christo’s wishes, L’Arc de Triomphe, Wrapped, will be realised by his team.

Installation work for the Christo and Jeanne-Claude project began on July 15, 2021. The finalised work of art is on view for 16 days, from September 18 to October 3, 2021.

Donald Judd Will Now Be Represented By Mega Gallery Gagosian

Gagosian has announced the representation of the work of Donald Judd and the Judd Foundation. The partnership underscores the gallery’s more than forty-year commitment to critical artists of the twentieth and twenty-first centuries. Donald Judd (1928–1994) produced visual and written work that shifted the course of modern art. Starting out as a painter in the 1950s, he began making three-dimensional works in the early 1960s, aiming to create objects that were free of the illusionism associated with painting. The aluminium, plexiglass, and plywood objects utilised the neutrality of their industrial mediums, and Judd’s production methods emphasised schematic variation and spatial definition through form. His interdisciplinary focus included architecture as well as furniture, and he was a prolific critic and essayist whose writing clarified his own artistic intentions as well as insightfully reflected on the work of his contemporaries.

“It is impossible to consider the history of American art without Donald Judd. He played an essential role in the development of modernism and was as respected by his peers as he is revered by artists working today. We got to know each other in New York in the early 1980s and he was one of the first artists whose work I admired. The use of colour and proportion, together with a unique combination of rigour and elegance, was compelling and remains essential today. Being a partner in realising his vision and presenting his work as he intended is a great honour for me and the gallery. —Larry Gagosian. 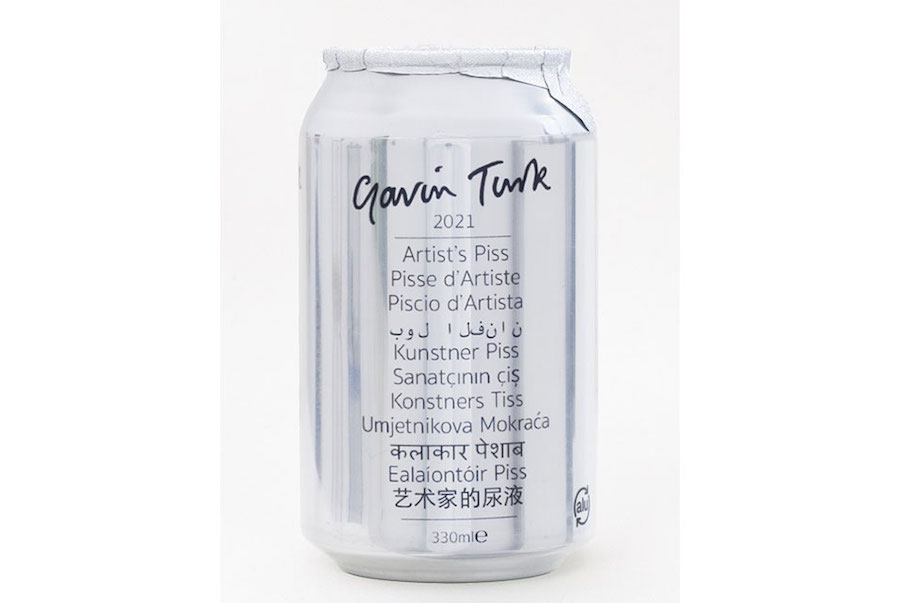 The YBA/British artist Gavin Turk has launched a Kickstarter campaign where he will sell bespoke aluminium cans of his own urine for its equivalent weight in silver. Entitled Piscio d’Artista, the project is a homage to art history – in particular to Piero Manzoni’s 1961 Merda d’Artista, in which the Italian artist challenged the idea of modern art by selling tins of his own excrement for their weight in gold.

In preparation for Piscio d’Artista, the boundary-pushing artist, who has been collecting his urine over the last two years of the global pandemic, has developed an aluminium can specially screen-printed with the phrase “artist’s piss” in 31 languages, and sealed with a hand-signed foil. He is turning his studio (in Canning Town in London) into a temporary canning factory in order to create a limited run of one thousand 330ml tins, to be priced relative to their equivalent weight in silver.

“I am fascinated by the life of things and what we ‘throw’ away,” says Gavin Turk. “A connection is severed as something disappears from me and is thrown away, and when I look at those disposed of things, I learn so much about how, what, why and who we are. As visual philosophy, art is always going to be seen through the paradigm of other art – a system of symbols and signs that are recycled through the generations.”

The Kickstarter Backer Rewards include a Blue Heritage Badge inspired by the plaque featured in his iconic Cave installation, a special dinner at Atelier Gavin Turk, the cans themselves, as well as limited edition prints and his iconic t-shirts.

Gavin Turk is a British born, international artist associated with the Young British Artists. He has pioneered many forms of contemporary British sculpture, including the painted bronze, the waxwork, the recycled art-historical icon and the use of waste in art. Turk’s practice deals with conversations of authorship and identity, concerned with the ‘myth’ of the artist and the authenticity of a work.