The artist Christo has announced that he has received permission from the French government and the country’s Center for National Monuments to wrap the Arc de Triomphe, one of the most iconic landmarks in Paris.

There is some irony and sadness that she (Jeanne-Claude) is not here. But I am eager to go ahead with my life and do my work – Christo

The project, “L’Arc de Triomphe, Wrapped (Project for Paris, Place de l’Étoile-Charles de Gaulle),” will cover the marble arch with a silver blue polypropylene fabric that is nearly 270,000 square feet. It will be held together with about 23,000 feet of red rope. All material will be recyclable. 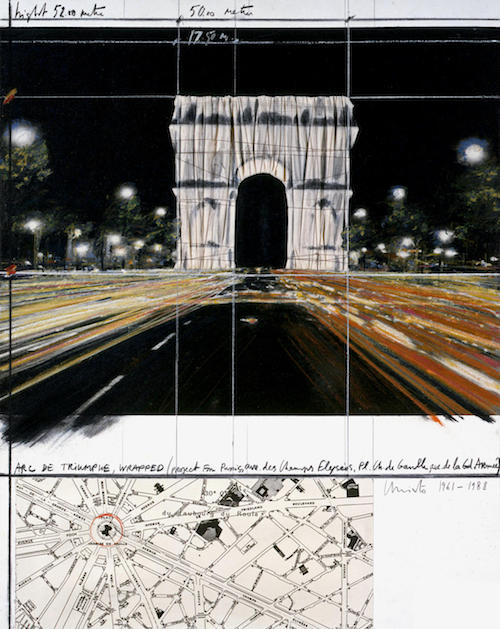 Christo told the New York Times, “Jeanne-Claude was so close to me all my life,” Christo, 83, said in a telephone interview. “Of course there is some irony and sadness that she is not here. But I am eager to go ahead with my life and do my work.” The project, “L’Arc de Triomphe, Wrapped (Project for Paris, Place de l’Étoile-Charles de Gaulle),” will involve covering the arch with a silvery blue recyclable polypropylene fabric — nearly 270,000 square feet of it — held together with about 23,000 feet of red rope.

Jeanne-Claude who died in 2009 worked on the Arc de Triomphe project since its inception. The artists are known for wrapping the Reichstag in Berlin and monuments in Milan, The Gates, Central Park, New York City (1979-2005), as well a coast in Australia.

Christo (born 1935 in Gabrovo, Bulgaria) and his late wife Jeanne-Claude (born 1935 in Casablanca, Morocco, died 2009, New York City, USA) both are renowned for their large-scale environmental projects and temporary sculptures at sites around the world. Their first artistic collaboration was in 1961, where they created Stacked Oil Barrels and Dockside Packages at Cologne Harbour; an installation that remained for two weeks.

Last spring Christo unveiled his London Mastaba, the first major outdoor public work by Christo in the UK. It coincided with an exhibition at the Serpentine Galleries of Christo and his late wife Jeanne–Claude’s work.