The conceptual artist Christo has been given the go-ahead to create a massive ‘Mastaba’ sculpture situated in Hyde Park. The work of art will be floated on the Serpentine a manmade lake this summer. Westminster Council approved the plan, by granting planning permission on the 23 January.

This latest project will be funded entirely by the artist.

The work of art will be the centrepiece of a new exhibition which will be unveiled at the Serpentine Galleries (20 June-9 September). 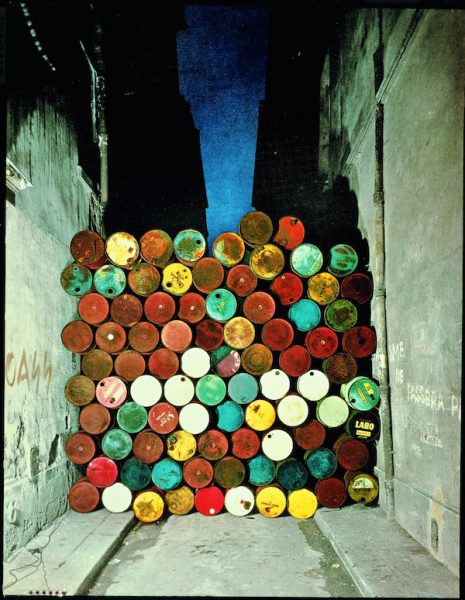 This will be the first exhibition of Christo and Jeanne-Claude in a London public institution since 1979. Christo and Jeanne-Claude are known for their ambitious, large-scale environmental works of art that intervene in the natural world and urban surroundings by altering both the physical form and visual appearance of sites. The temporary nature of these works has, over the years, formed an extensive visual archive of preparatory drawings, collages and photographic works, which detail the organisation and vision of these projects and those never realised. The Serpentine Galleries is working closely with Christo to develop an exhibition of sculptures, drawings and photographs spanning more than 50 years.

Last year, Christo put a stop to his Over the River project, covering 42 miles of the Arkansas River in silver fabric for 14 days. After 20 years of planning, He said he had no interest in finishing the project under Donald Trump’s presidency.

This latest project will be funded entirely by the artist,” a Serpentine spokeswoman told the Evening Standard newspaper, the Mastaba will comprise 7,506 barrels placed on a platform of plastic cubes.

Christo’s Floating Piers on Lake Iseo in Italy the New York-based artist’s first outdoor installation since 2005 was the world’s most-visited work of art in 2016. Christo erected 3km of fabric-covered pontoons between an island and the shore and invited the public to walk on water. In total, 1.2m people experienced the site-specific installation over 16 days.

The Mastaba project originally conceived for Abu Dhabi, in 1977 will be the largest sculpture in the world, made from 410,000 multi-coloured barrels to form a mosaic of bright sparkling colours, echoing Islamic architecture. The Mastaba is an ancient and familiar shape to the people of the region. The Serpentine Mastaba will be a smaller scale version of the sculpture.

The colours and the positioning of the 55-gallon steel barrels were selected by Christo and Jeanne-Claude in 1979, the year in which the artists visited the Emirate for the first time.

The proposed area is inland, in Al Gharbia (Western Region) approximately 160 kilometres (100 miles) south of the city of Abu Dhabi, near the oasis of Liwa.

In 2007 and 2008, Christo and Jeanne-Claude contracted professors of engineering from ETH Zürich (Swiss Federal Institute of Technology Zurich), the University of Illinois at Urbana-Champaign in the US, Cambridge University in the UK and Hosei University in Tokyo, Japan, to prepare structural feasibility studies about The Mastaba. All four teams worked independently and did not know each other.

The artists then hired the German engineering firm, Schlaich Bergermann und Partner, in Stuttgart, to analyze these reports. The Hosei University concept was found to be the most technically sound and innovative. The entire substructure, as well as the layer of barrels, will be assembled flat on the ground. Ten elevation towers will make it possible to raise the entire structure on rails to its final position in about 3 to 4 days.

In 2012, Christo commissioned Pricewaterhouse Coopers to conduct analyses on the social and economic benefits of The Mastaba.