Over four decades ago I had one of the most exciting experiences of my life – encountering perhaps the most original and innovative artists of the past sixty years, Christo, who died on Sunday 31 May, and his wife Jeanne-Claude, who was revealed some years later in 1994 as his collaborator. Jeanne-Claude died in 2009, but her presence remained, as Christo revealed his continuing apprehension of her creative point of view.

He was, without seeming effort, endlessly charming and persuasive – MV

We met at one of the early masterpieces, Running Fence, (1976). I had gone to report on this phenomenon which seemed almost absurd when I first heard about it. Running Fence was a temporary installation, existing in real-time – two weeks – and space, over 24 miles in farmland in Northern California: a fence, which shut nothing out nor in, 18 foot high, and made of translucent gleaming and shimmering white material. We drove and walked – although the fence winding through private farmland could not be walked up to but only observed from varying distances – to see this at various times of the day and early evening, with varying light, atmosphere and weather. Jeanne-Claude with her characteristic wild red hair and wearing marvellous emphatic bright red lipstick kept the show on the road. And even her mother, Madame, who had initially been horrified at her daughter’s attachment to a penniless Bulgarian, was there. Madame, the widow of the general, was the epitome of French chic, immaculately made up and costumed in cashmere. But she was there. If Christo could convince his mother in law, he could convince anybody. 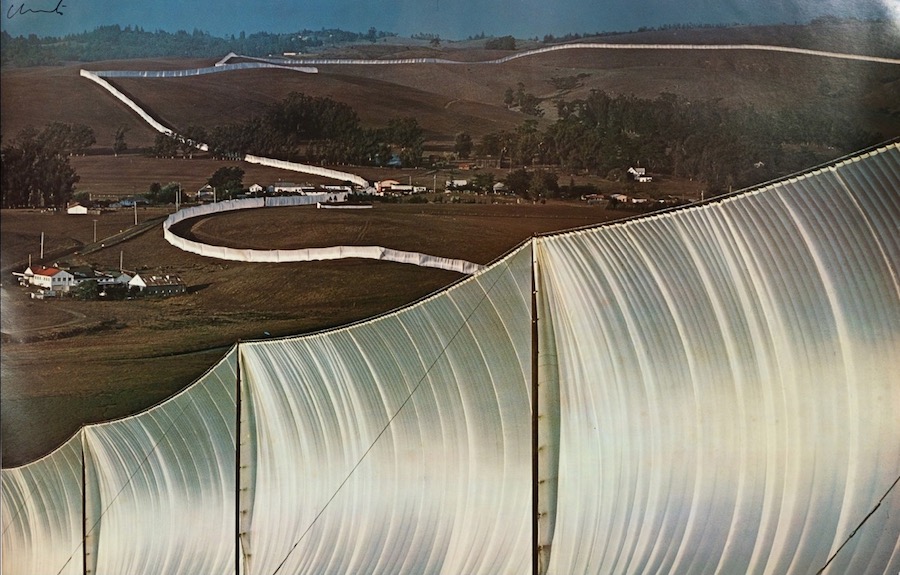 Christo was wiry, loquacious endlessly energetic and almost wildly prolific. He was, without seeming effort, endlessly charming and persuasive. He had perfected a highly original and unique entrepreneurial model for an art that was truly democratic in experience and used capitalist techniques to realise his projects. His methods have been used as casebooks to demonstrate successful entrepreneurship.

Each realised work (there were over twenty large scale installations in his lifetime, nearly forty which were never realised) involved not only decades of planning and permissions but millions of dollars in cost, hundreds upon hundreds of workers to manufacture and install, and finally the recycling of all materials that could be retrieved. The pair convinced people of all kinds from officials to that great beast, the general public, of the validity of installations which on paper seemed so wildly improbable. He had by the time I met him already wrapped columns of air, and a million square miles of the Australian coast. But Running Fence was his largest and most accessible project to date.

Christo was born in Bulgaria on June 13 1935, in a weird and telling coincidence the same day and year as his future wife and collaborator, the beautiful and clever Frenchwoman, Jeanne-Claude, whom he met in Paris, a pause before they both finally emigrated to America in 1964. The couple were to live very modestly in a flat and studio in Chinatown, SoHo, in downtown Manhattan, although they were to buy the building. Together they collaborated on multi-million-pound projects. The partnership only ended when Jeanne-Claude died in her mid-seventies in 2009. She was the critic, administrator, logician of the huge enterprise that was the art. It was not for nothing that Jeanne-Claude came from a highly successful military family; courage, combined with persistence was their hallmark. He was quoted only last month as saying that he was an artist who was “totally irrational, totally irresponsible and completely free”. The wrapping of the Arc de Triomphe in Paris will go on posthumously next autumn, pandemic permitting, and there will be a mammoth exhibition at the same time at the Pompidou Centre.

What Christo did so brilliantly and so inventively, coming as he did from a communist state, was to use the very techniques of capitalism to make ephemeral art installations which were open, free, to hundreds of thousands, even more, visitors who contributed almost untold wealth (tourism) and aesthetic pleasure to their immediate environment and beyond. Millions poured into New York with the visitors to The Gates, for example. His contribution to Berlin with the Wrapped Reichstag (1995) and its millions of visitors, was recognised when he was given the Freedom of the City. From the grand to the miniature: his imagination extended to – say – helping the fundraising for the Peanuts museum in California, where he produced a print in mixed media which depicted Snoopy’s doghouse – wrapped. 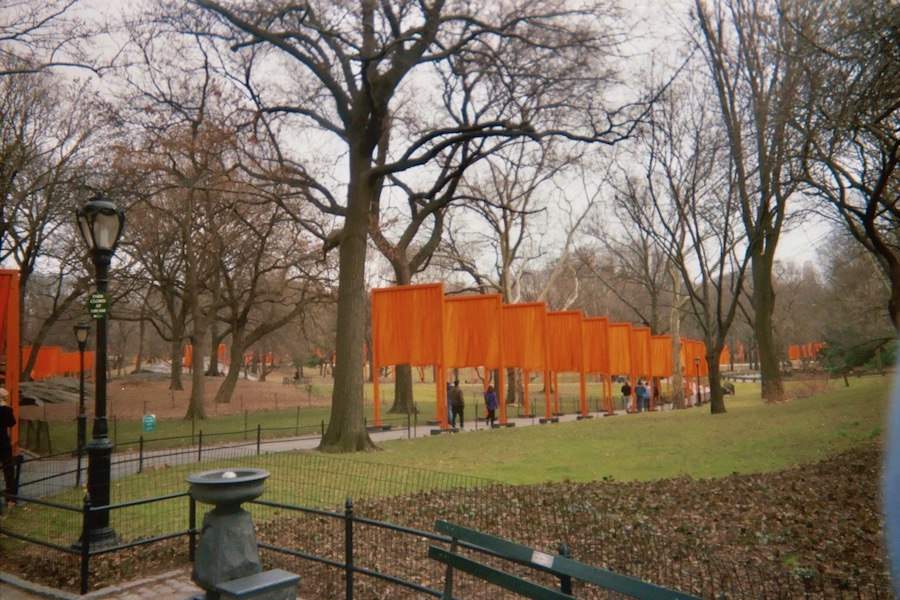 Christo’s marvellous talent for draughtsmanship and composition was evident in the prolific outpourings of collages, drawings and prints which acted as stocks and shares, sold the world over to collectors and museums. This was the bedrock finance that enabled the projects which were so many years in the planning and the making. The almost endless – sometimes in the case of the Wrapped Reichstag, in Berlin -several decades of hearings with politicians and planners to gain permissions for the installations were also considered part of the work. Moreover, extraordinary steps were taken in collaboration: for Running Fence, mothballed factories reopened to make the special translucent white fabric that made up the 24-mile 18-foot fence that curved round farmland in California – visible from the roads – before cascading into the sea. For example, one of the closed factories that had reopened was no longer needed to make parachute materials for the Vietnam war. The Reichstag, Berlin, instrumental in the biggest street party ever seen in the reunited city, deployed the skills soon to vanish of East Berlin scaffolders whose talents were vital in that part of the city too poor to use industrial cranes for building. It had to take place just when it did after two decades of getting permissions, as the Reichstag was about to be remodelled by Norman Foster, whose office was on the other side of the building from Christo. Typically the Christos had several floors of an old and very unfancy East Berlin hotel on the East Berlin side of the Brandenburg Gate for visitors, friends and collaborators.

Running Fence was a marvel. It had to convince all authorities that neither flora nor fauna would be harmed in its construction, nor would the traffic cause problems. Years went into getting relevant permissions. I will never forget that in the midst of a hugely complicated logistical operation, Christo and Jeanne-Claude never made the questioning visitor – me – feel they did not have time. What I was completely unprepared for was the fact that, as I know from my luck in seeing in real-time and space the art of the Christos, was the importance and joy of seeing the work in such a way.

The superb series of illustrated publications that have come out documenting all the installations are invaluable. From them we can get a sense of the Pont Neuf in Paris, wrapped in shimmering gold, the 7,500 orange-saffron coloured Gates in Central Park, New York, Surrounded Islands off the coast of Miami in Florida, bordered by flamingo pink fabric, the Floating Piers in Italy where it felt as though the visitors were walking on water, all illuminated by the astonishing physical statistics, to name but few. The photographs are in the main taken by Wolfgang Volz, a trusted collaborator. The films made by close and experienced collaborators of the Christos, the Maysles brothers, are wonderful. Christo worked with those he chose. He showed in many galleries but had contracts with none. He and Jeanne-Claude were always in control, in ways unique to them.

But nothing can quite equal the astonishing pleasure at meeting the Christos, so intelligent, so tenacious, so determined, so imaginative, so open, so generous, and their work in all its guises open to anyone. I think that they were geniuses if that means having the ability to change things and in their case for the better, for collaborators in the thousands, and for an audience of millions. They made the impossible possible. They showed us the possibilities of an art that only they envisioned, outwith the walls and into the world.