A bronze sculpture by the Modernist artist Constantin Brancusi has sold for the record-smashing price of  $57.37 million in New York on Monday. This is the highest price achieved for the Romanian-born sculptor and more than twice the pre-sale estimate.

The artwork depicting a woman’s head titled “La muse endormie” sold after nine minutes of sometimes frantic bidding at Christie’s impressionist and modern art sale in New York. Created in 1913 the bronze, a casting by an artist lived in Paris, was bought by an anonymous bidder appearing in the catalogue for $25-35 million. The other top lot of the sale was Pablo Picasso’s (1881-1973), Femme assise, robe bleue which realised $45,047,500. The portrait of his mistress, Dora Maar, called “Femme assise, robe bleue,” was painted on the artist’s 58th birthday, realised $45 million. The canvas has had a provenance dating back to the artist’s friend and gallerist Paul Rosenberg. It was confiscated by the Nazis and recovered by Rosenberg’s son.  It was later sold to US financier, industrialist and art collector George David Thompson. The pre-sale price was estimated at $35-50 million. 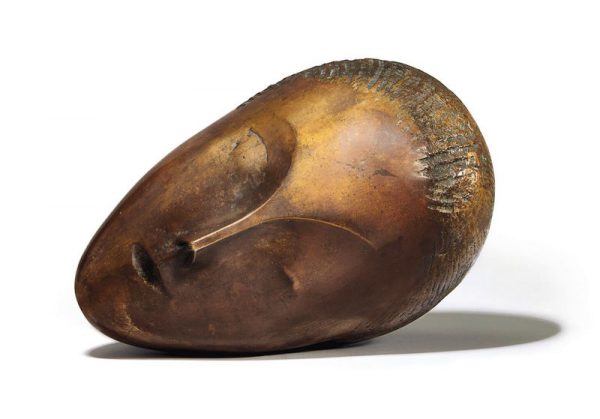 La muse Endormie counts among the most important achievements in the dawn of a new sculptural language. It is an intense purification of form and emotional resonance. First conceived in marble in 1909-1910, La muse endormie was cast by Brancusi in six bronze versions by 1913. Four bronzes today are housed in museums—The Metropolitan Museum of Art in New York, The Art Institute of Chicago, and two examples in the Musée National d’Art Moderne, Centre Georges Pompidou in Paris. The sculpture at Christie’s last night was acquired by the distinguished French collector Jacques UImann in the 1950s and has remained in his family to this day. La muse endormie is the first in Brancusi’s series of ovoid sculptures, marking the inception of the artist’s mature work and his advance towards pure abstraction. The form of a Brancusi was in his early thirties when he conceived this breakthrough sculpture. He had arrived in Paris from his native Romania in 1904 at the age of twenty-eight. From his earliest years in Paris, Brancusi had been fascinated by the theme of sleep. Between 1906 and 1908, he sculpted several heads of sleeping women and children, all of which retain the descriptive naturalism that he had learned from his work in Auguste Rodin’s studio.sleeping woman’s head has been distilled into an almost perfect oval, the purity of outline marked only by subtle allusions to the physical features of the model.